James Fulford writes: We've been hearing a lot about "right-wing violence" at the recent Capitol protests from pundits who seem to have forgotten that the Communists who rioted against Trump rallies before he was elected also turned up on his first day in office to riot against his election.

VDARE.com editor Peter Brimelow wrote this below after Inauguration Day 2017 about the substantially-unreported military occupation and fencing in the District of Columbia, which notoriously prevented Trump supporters getting to the reviewing stands, resulting in much media gloating. But Biden's Inauguration has much more military preparation, and twelve-foot fences with razor wire...something Trump's disloyal subordinates wouldn't put on the border fence.

And this is being cheered by the same people who thought that Trump's 2019 Fourth of July military parade was some sort of "Crossing The Potomac" moment.

That means that you could either say that the outgoing Trump Administration is protecting Biden better than the Obama-Biden Administration was willing to protect Trump...or that the Deep State is on Biden's side.

There's no reason to expect any trouble from the 74 million Americans who voted for Trump—the Epiphany Capitol Protest was apparently spontaneous, and mild by the standards of the Summer of George Floyd. But the J-20 Riots of 2017 were planned and organized by Antifa.

Another riot planned and organized by Antifa: the assault on the Unite The Right Rally (itself a genuinely peaceful protest) at Charlottesville in August, 2017, eight months after the Inauguration Riots.

The Left has always been the party of riots that are called protests, and we've just had a year of burning, looting, murder, and destruction to prove it. See Michelle Malkin: Amnesia of the Anarcho-Tyrannists for more.

The question is will the "exemplary" punishment of Capitol protesters, which looks to be massively unequal justice, intimidate dissident members of the Historic American Nation? Or will it, as Admiral Yamamoto was depicted as saying after Pearl Harbor,  "awaken a sleeping giant and fill him with a terrible resolve"?

You could tell from thirty miles out that this was not a day like all others. Northern Virginia traffic is notoriously awful—I once derailed Joe Sobran’s bitter complaints about it, in his see-no-evil-in-immigration days, by pointing out that sprawl is a direct result of immigration-driven population growth—but in the rainy early morning I-66 was eerily empty. Quite obviously, even civilian commuters were staying home on Inauguration Day. Our native guide, who had been planning a complicated route involving parking at a far Metro stop, grew increasingly optimistic. We finished up driving all the way to Roslyn, the edge of the heart of the District, where we found parking easily and took a cab to Capitol Hill.

There the reason for the eerie emptiness became immediately apparent: there had been a military coup.

The streets swarmed with uniformed men (and women, looking ridiculous as usual but still carrying guns). It was extremely difficult to get around. Humvees, concrete blocks and high wire fences had sprung up everywhere.  There was an unmistakable feeling of curfew—intensified by fact that, as you got closer, everyone seemed to be hurrying intently in the same direction, as if trying to get home before the blackout. They were Trump supporters, cheerful but orderly and quiet, headed for the Mall. 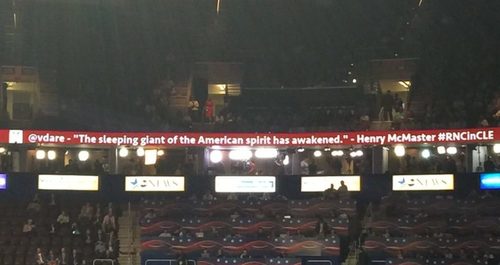 As it happened, VDARE.com senior management had this odd (but usefully traffic-clearing) experience in another great American city a few months earlier: an empty Cleveland, when Donald J. Trump accepted the GOP nomination.

But in Cleveland there were no riots. It’s a mark of the Left’s intensifying assault that in D.C., despite this intense lockdown, there were still riots and some 230 arrests.

It’s exactly 36 years since I last attended an inauguration—Ronald Reagan’s first—and I had vowed never to do it again. My first wife was so outraged that our recently joint but still-pitiful finances had been so humiliatingly ripped off by what turned out to be the impossible mob scene at the Inaugural Ball for which I had purchased tickets that for a while I feared for our new marriage. (Anyone know if the Official Balls were better this year?) But, although living at that time in a Washington that was the Ground Zero in the Cold War that was then very far from won, I recall nothing like this omnipresent and oppressive security.

(This puts the MSM meme about empty stands opposite the White House at the parade into perspective. Friends who attended the swearing-in and had tickets to the parade told us that, after a long wait in an unmoving line for another security check, they simply gave up and went off in search of lunch.  Odd that no journalist mentioned this obvious point. But Jared Taylor reports that arrangements for the press worked much more smoothly, so maybe they didn't notice).

What it comes down to is this: in order to inaugurate a President who was the clear choice of the founding stock of the Historic American Nation—63 % of white males and 53 % of white women voted for Trump—the capital of the Republic they created must be turned into an armed camp.

Under these threatening circumstances, it surprises me that anyone came to the Inauguration at all. But they did, in their hundreds of thousands from the Heartland, nice patriot families with children like the ones who attended Trump’s great rallies—even after Leftists mobbed and shut down Trump’s Chicago rally in March, disavowed by precisely no one among the Main Stream Media, the Democratic Party (where distinguishable), or even Trump’s fellow GOP contenders.

They were overwhelmingly white. (Although not exclusively—Lydia, who had a better Inauguration Ceremony ticket than I did, found herself in a cheering section of Sikhs.) 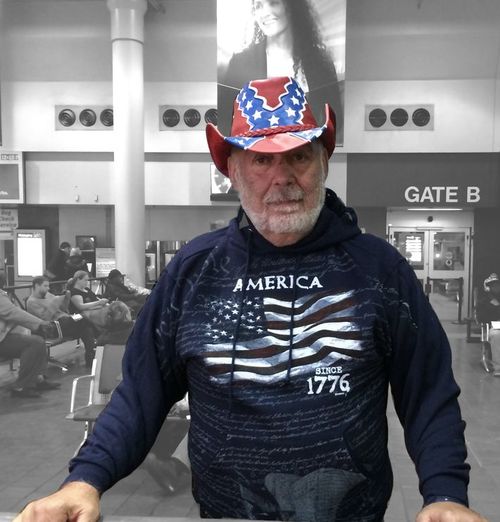 But they were nice. Here’s the fashionable liberal site VOX, amazed to meet ordinary Americans: These “nice guy” Trump supporters were the real story at the inauguration, by Jeff Stein and Zachary Crockett, January 21, 2017.

But niceness, of course, is not enough:

Greg Jones, adorned in a Confederate flag cowboy hat and American flag boots, says he was swayed by Trump’s promise to restore manufacturing jobs. After watching Trump get inaugurated, he hangs around at Union Station, hoping to strike up friendly debates with protesters. “They see my hat and tell me to go to hell,” he says. “Just come talk to me. Give me a damn chance. You’ll see I’m a nice guy, capable of engaging in a conversation.” Jones, from Daytona Beach, Florida, came to DC for the first time in his life to support Trump. “I used to work on trains as a factory worker,” he says, leaning up against a railing. “I’m a simple guy. I have a family to feed.” As hundreds of protesters marched by the seating area of the train, Jones said he’d been trying to talk with someone the whole time. Nobody had stopped for more than 30 seconds.

(Emphases added to all quotes.)

Of course nobody stopped to talk—because the Left does not want to talk. It wants to triumph.

Trump’s Inauguration was the first physical confrontation in America’s coming Civil War. It did not amount to a Manassas, which we drove past on our way into Washington, now overwhelmed by Northern Virginia immigrant sprawl. It did not even amount to a Harper’s Ferry—no-one was actually killed.

JF 2021: Since then, several Trump supporters have indeed been killed. That includes Ashli Babbitt, shot in the Capitol, Aaron “Jay” Danielson, gunned down by antifa Michael Reinoehl  in Portland, Patriot Prayer Shane Moon run over (he survived, barely) by an antifa-driven truck,  Lee Keltner, shot to death in Denver, and Jake Gardner, driven to suicide by black prosecutor Fred Franklin who targeted him after he defended himsel from a mob.

But that’s just a matter of time. Look at this video of the assault on Richard Spencer—with whom we’ve had our differences but for God’s sake:

And note the apparent approval of the New York Times and the Left Twittosphere: Attack on Alt-Right Leader Has Internet Asking: Is It O.K. to Punch a Nazi?, by Liam Stack, NYT, January 21, 2017.

Typically, the DC police apparently told the press that they had received no complaint and therefore were not investigating the incident. Spencer has now filed a report.

JF 2021: No one was ever prosecuted for punching Richard Spencer. When Jason Kessler was punched in the face after the Charlottesville UTR riot, the man who did was fined $1 by a local jury [Charlottesville Jury Fines Man $1 for Punching White Nationalist, Rolling Stone, September 6, 2018].

If the incoming Trump Administration is behind the federal prosecutor's apparent intention to charge rioters with "felony rioting" i.e., go for exemplary sentencing, that all by itself justifies the 2016 election [Majority of 230 protesters arrested on Inauguration Day will face 10 years in prison and $25k fine as US attorney says they will be charged with felony rioting, by Anna Hopkins and Cheyenne Roundtree, Daily Mail, January 21 2017].

JF 2021: But the promise of exemplary punishment for anti-Trump rioters was totally frustrated by the Kritarchy, with the aid of Soros-funded lawyers and organizations: see Scandalous J20 Verdict: Sabotage by Judge Lynn Leibovitz Upholds Left’s Right To Riot=Another Step On Road To Civil War, and Evil Triumphs in D.C. As Prosecutors Drop Remaining Charges Against Trump Inauguration Rioters

And look at these randomly-selected incidents:

And even on an apparently trivial interpersonal level:

I agree with Luntz:

[T]hese protests are out of control. The language is out of control. There are 8- 9- 10-year-olds watching this. They read these horrible words from these signs and to have to face this personally — you can see that I get choked up. I never thought this would be America. I never thought this would happen in this country…I think they want to prove that they can be as loud and as obnoxious and in your face as possible. I think they want to try to intimidate the Trump administration. But the thing that bothers me the most is there is no unity. We’re not going to cure these divisions. They are just going to go on, not just for months but probably for years. I really think we are not seeing the end but the beginning of this violent action in this country. [Luntz: I Was Called A Fascist, Glitter Thrown In My Face; "I Never Thought This Would Happen In This Country", RealClearPolitics, January 22, 2017]

Immigration has produced a situation where we have “two nations warring in the bosom of a single state.” There’s America on the one hand and Anti-America on the other.

Hillary Clinton’s 2016 electoral coalition was barely half white. Subtracting Jews and homosexuals (maybe 3-4% each—Trump appears to have lost Jews by about 70% and homosexuals by 70%, despite having Jewish grandchildren and despite pandering to gay marriage), less than half the Democratic party vote at the Presidential level is what might be called generic Americans.