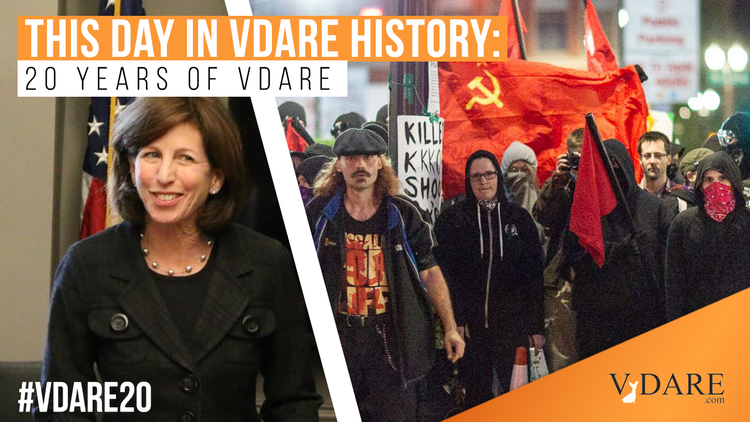 Originally published on this day in 2017.

After Inauguration Day, January 20, in “It Will Come To Blood”–Reflections On The Left’s Anti-Trump Inauguration Tantrum, VDARE.com Editor Peter Brimelow wrote: “If the incoming Trump Administration is behind the federal prosecutor’s apparent intention to charge rioters with “felony rioting” i.e. go for exemplary sentencing, that all by itself justifies the 2016 election.” But in the first 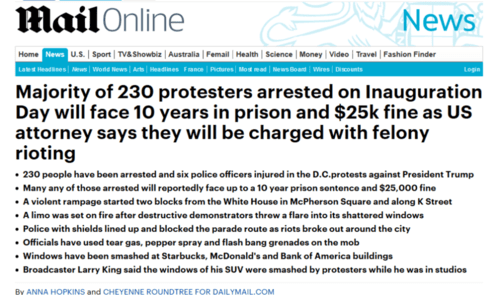 major trial of what are now called “J20” defendants, sabotage by Judge Lynn Leibovitz (PDF) has resulted in an acquittal on all charges, in effect reaffirming the Left’s right to riot. [6 Protesters Found Not Guilty in First Inauguration Riot Trial , NBC Washington, Thursday, December 21, 2017] In contrast, most of the Charlottesville Alt Right defendants, arrested after melees now confirmed to be a result of police malpractice, are still being held without bail—unlike their assailants. It is increasingly difficult to avoid the conclusion that America has a Cultural Marxist kritarchy—and that we are on the road to Civil War.

Leibovitz’ J20 malfeasance was a newfangled, stealth version of a directed verdict. Normally, all sides—jury, defense, and prosecution—rely on the judge to be an honest broker who preserves the process of a trial. “The court” must be fair-minded to all, in the interests of justice. But there are many ways in which a malevolent judge can corrupt the process. Thus in the many Knoxville Horror trials, judges variously corrupted the verdicts by shipping in extra black jurors, and by giving convicted perpetrators extra bites at the apple, resulting in reduced sentences.

Since the Inauguration riot trial was held in the District of Columbia, Presiding Judge of the Criminal Division of the Washington, D.C. Superior Court Leibovitz—a George W. Bush appointee, let the record show—did not need to ship in black (or Leftist) jurors. Her method for corrupting the verdict: muzzle prosecutors and witnesses from ever mentioning the terms “Antifa” and “Black Bloc,” calling them prejudicial—even though these are the terms that the movement itself uses [Inside The Trial That Could Determine The Future Of Free Speech In America’s Capital by Ryan J. Reilly, Huffington Post, December 10, 2017.]

Try making a persuasive argument—in or out of court—under rules in which you are not permitted to use the terms central to your argument.

During the trial, Judge Leibovitz threw out the felony riot charge. The AP operative who wrote the verdict story, one Ashraf Khalil, provided cover for her:

Even before the jury began its deliberations, Judge Lynn Leibovitz seriously damaged the government's case by throwing out the most serious charge against the six — a felony charge of inciting a riot. Leibovitz said there simply wasn't evidence to support the charge and the jury's verdict proved that prosecutors had failed to present convincing evidence to support even the remaining lesser charges. [Jury acquits all 6 defendants in first inauguration trial, Associated Press/Washington Post, December 21, 2017, 9:30 p.m.]

But the jury’s verdict proved only that Judge Leibovitz had successfully undermined the prosecution’s case.

Newsweek’s coverage of the acquittals could have been written by the rioters’ leaders, and unwittingly convicted them.

The first six of roughly 190 anti-Trump protesters facing felony charges were acquitted by a federal jury, and some experts believe other cases could end up being dropped—which amounts to a large win for the antifascist movement.

“For the first time since January, the activists were happy and smiling and laughing,” Jude Ortiz, a representative for Defend #J20, a civil rights group supporting the protesters, including the six who were cleared, Jennifer Armento, Oliver Harris, Brittne Lawson, Michelle Macchio, Christina Simmons and Alexei Wood.

Activists had said earlier that the trial, which followed skirmishes between some protesters and police, was an attempt to crack down on dissent. Many of the demonstrations were peaceful, witnesses said, and press coverage from January 20, 2017, confirm. But more than 200 people were arrested en masse by DC Metro Police that day.

The trial of the protesters itself was controversial. Federal prosecutors employed video evidence captured by Project Veritas, a controversial group that runs right-wing video stings and even tried to trick The Washington Post into publishing a fake news story about Alabama Republican U.S. Senate candidate Roy Moore.

Activists also accused DC police of political bias against them. Officers who testified against the protesters struggled to tell one suspect from another while testifying against them. A spokesperson for It’s Going Down, an antifascist website and news network that supports the protesters, told Newsweek, “None of the people were charged with doing anything but just being there.”

"Antifa" is more of a protesting tactic than the name of a movement. Still, it has been blamed for a growing number of bizarre and demonstrably false conspiracies by right wing pundits in recent months… 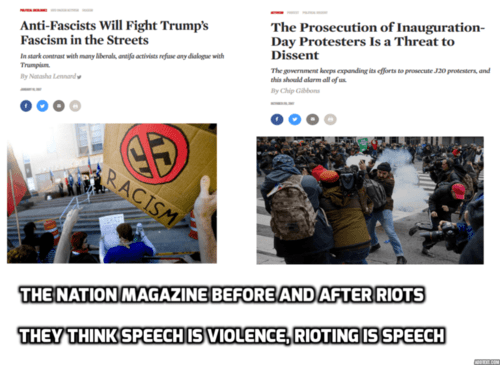 Remember that before the Inauguration, the Leftist magazine The Nation called for violence, only to suffer amnesia afterwards. And the AntiFa organizing website was DisruptJ20, set up with the sole purpose of conspiring to riot (note its NAME!!!)

The Totalitarian Left has defined its own violence as “dissent,” while redefining mere dissent by patriots as “violence.” Judge Leibovitz and the Main Stream Media clearly agree. 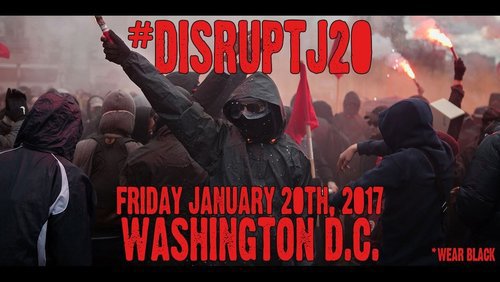 The “protesters,” including the ones just acquitted, made a conscious decision to dress in the uniform of the Black Bloc, all black with masks to hide their faces, and let them blend in with the active rioters, so as to make it impossible for the police to distinguish rioters from non-rioters, and they accompanied the rioters as human shields:

At the same time, the riot organizers—who made clear the whole show was a riot—organized lodging for the rioters:

One member of the "D.C. counter-inaugural welcoming committee" commented anonymously that housing space for 1,000 visiting radicals, in both church halls and houses, had been organized by their group alone. New York anarchists are raising funds to rent whole buses to attend. And, as historic anti-fascist mass protest dictates, there are plans for a large black bloc—a spectacle both intentionally threatening and anonymizing…. [Anti-Fascists Will Fight Trump’s Fascism in the Streets by Natasha Lennard, The Nation, January 19, 2017]

If that isn’t a criminal conspiracy, I don’t know what is.

In its closing, the prosecution made the getaway car driver argument—the fact that if one doesn’t go into a bank with a gun during a robbery (while waiting in the getaway car), it doesn’t make one any less guilty of being a bank robber.

The D.C. jury responded, in so many words, “Robbery? What robbery?”

“The jurors believe criminal acts were committed” on the morning of Inauguration Day, Juror 16 said, but the government never showed that the six people charged were responsible for the destruction. “The prosecution helpfully acknowledged it had no knowledge that any defendants committed an act of violence or vandalism.”

[Acquitted AntiFa Britne] Lawson asked if she could hug [Juror 16]. He suggested a handshake instead, and commended her work as a street medic.

She’s one of two people, along with Macchio, who attended the protest with first aid kits, and Lawson was wearing a white helmet with a red cross taped on it. In closing arguments, [Prosecutor] Qureshi said that the gauze in Lawson’s fanny pack showed she “prepared for war.”

VDARE.com has long spoken of the need to impeach rogue judges. (I’m looking at you, Lynn Leibovitz.) The Left calls such perfectly lawful sanctions of black-clad rogues—the other Black Bloc—an attack on the “independence of the judiciary.” What a joke! These are the same people who threatened to impeach Chief Justice John Roberts, if he voted to repeal Obamacare.

If one cannot reform the judiciary, or any other institution, through peaceful means, including lawful elections and referenda, then the alternative becomes surrender—or civil war.

Conclusion: My VDARE Editor Peter Brimelow directs that I not close without some Christmas cheer. One hundred and eighty-eight J20 defendants still await trial and the feds do apparently intend to proceed. [Inauguration Day prosecutions to continue, despite acquittals, by Neal Augenstein, December 22, 2017). This imposes considerable costs on George Soros that absolutely would have not occurred under Obama.

And at least one AntiFa rioter has actually been appropriately punished. [Man who threw flare into cop car during May 1 protests to get 5 years, by Aimee Green, OregonLive.com, September 25, 2017]