Paul Kersey called me early this morning to urge me to me to write the concluding fictional chapter I had originally projected for my 1995 immigration book Alien Nation: Common Sense About America’s Immigration Disaster: about the flight of the last white family in Los Angeles, led by a heroine I would call Virginia Dare, because it seemed…somehow symmetrical. (For some reason, this idea really annoyed the Southern Poverty Law Center—$PLC to VDARE.com).

Kersey’s point: the mobbing of the Trump rally in Costa Mesa on April 28 (as well as the San Fernando freeway shutdowns ignored by the national Main Stream Media but reported by Steve Sailer) showed that Mexifornia, with its characteristic Latin American intolerance and tradition of public intimidation by turba is now here. (Much to horror of his swamped California relatives).

Since Kersey called me, of course, “protesters”—who of course should properly be called “disrupters,” and, increasing, "rioters"—have blocked Trump’s car from entering the California Republican Convention in Burlingame, so that he had to enter by crossing a wall, and then broke through barricade outside the conference hotel. [Protesters pummel Donald Trump lookalike as the GOP front-runner addresses California Republican Party convention, by Rich Shapiro, New York Daily News, April 29, 2016] 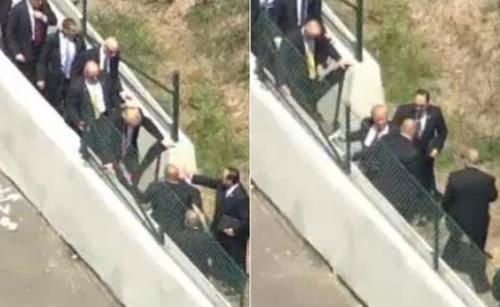 Trump quipped: “It felt like I was crossing the border.” But of course he was—between America and its Third World future.

Unless immigration is cut off.

Points you won’t see made in the Main Stream Media in its role of Leftist Narrative Enforcer:

There have been anti-Trump rioters in Chicago, Arizona, St. Louis, and Pittsburgh. But California shows that the Left is now moving to a new level—because it thinks it can. Remember Pim Fortuyn. Are those who so carelessly compare Trump to Hitler etc. ready to take responsibility? Costa Mesa was where Ann Coulter’s book signing for her best-seller Adios America! was disrupted last year. This did elicit from her one of her world-class quips

screaming and defacing things is how Latin Americans express disagreement. At least as long as they were destroying books and screaming in a book store, they weren’t molesting any 4-year-olds

But it’s not funny.

Another case in point: Anaheim, only a few miles from the Contra Mesa riot, was the scene of Ferguson/ Baltimore-style Hispanic/ Leftist riots in 2012. But the rot has been festering for years.

In 2006, I pointed out in an American Conservative article back in 1993 that Barbara Coe of the California Coalition for Immigration Reform was fired by the Anaheim Police Department, where she managed the Crime Analysis Unit, because she persisted in drawing to the attention of her superiors the dramatic increase in immigrant crime. (Barbara, a true patriot, died in 2013, but her influence is still felt).

No doubt many Americans will be radicalized toward Trump, just as the 1968 Chicago riots supposedly helped Nixon. But the equally-disgraceful shut-down of Trump’s March rally in Chicago was shrugged off by the political class. I wrote at the time

Trump may be able to hold rallies in future, but my guess is that the women and children will stay home. This is a tragic loss of innocence. The political class (including Ted Cruz) that has failed to condemn the Left’s mounting violence, and indeed sought to blame it on Trump, have themselves to blame for what happens next.

And indeed VDARE.com’s Ryan Kennedy noted above that, in sharp contrast to my observations last fall, there were no children in the Trump crowd in Costa Mesa (although there were still women). Ordinary people cannot be expected to be heroic, and if this goes on Trump may eventually be deprived of the mass rallies that have been his secret weapon. Both in Chicago and Costa Mesa, police were reportedly surprised by the size and violence of the anti-Trump turba. There is no excuse for this happening again.

The answer to politics through riot is ruthless coercion and “exemplary sentencing.” And, for those arrested who turn out to be illegal aliens, immediate strategic deportation.

But instead only 17 were arrested in Costa Mesa  and only 5 in Burlingame.