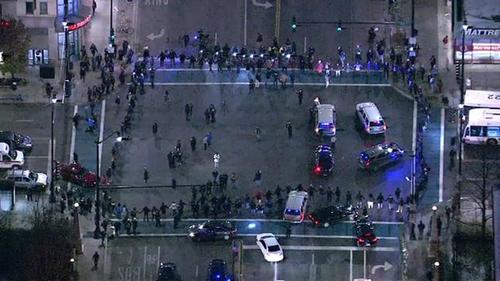 The video of Laquan McDonald's killing in Chicago, as Andrew Branca points out on LegalInsurrection, shows actions which are "entirely consistent with the lawful use of force by [white police officer Jason]  Van Dyke." But of course that's not what you're hearing from the Megaphone—which means that, as in Ferguson, Baltimore etc.—things are headed in a bad direction...again.

On Tuesday evening, the city of Chicago released grisly footage of the shooting of 17-year-old Laquan McDonald on Oct. 24, 2014. Last week, a Cook County judge ordered the footage be made public and Chicago Mayor Rahm Emanuel held a press conference appealing for calm ahead of the release of the dashcam footage that shows white Chicago Police Officer Jason Van Dyke shooting McDonald, who is black, 16 times on the street. (You can read more about the case from Slate’s Leon Neyfakh here.)

Laquan McDonald’s family opposed the video’s release and also appealed for calm in a statement. “No one understands the anger more than us, but if you choose to speak out, we urge you to be peaceful,” the family said. “Don’t resort to violence in Laquan’s name. Let his legacy be better than that.”

But why should McDonald's legacy be "better than that"? He was an armed maniac on PCP! 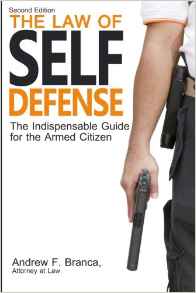 Here's more from lawyer and author of  The Law Of Self Defense, Andrew Branca:

McDonald was brandishing a knife in his right hand as he walked down the middle of the street while facing numerous police officers.  It must be assumed that he was being non-compliant with lawful orders to drop the knife, get on the ground, and the usual law enforcement protocols for such circumstances.  Note that the police have a legal duty to enforce public safety, and cannot simply allow a knife-wielding PCP addict to wander up and down the public streets.  Only one person was making a free choice that evening, and that was McDonald.  He chose, as they say, poorly. [Emphasis in original.]

Robert Stacy McCain, who has personal experience, talks about the effects of PCP here.

Here, from the Chicago Tribune, is a description of what kind of maniac McDonald (pictured right) was at the time of his death: 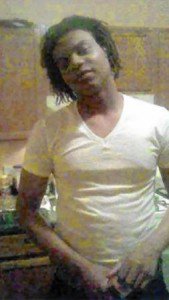 "The first two officers on the scene trailed McDonald for nearly a half-mile, from a trucking yard where he had been breaking into vehicles through a Burger King parking lot and onto busy Pulaski Road. As officers awaited backup units armed with Tasers, they tried to corral McDonald to keep him away from passers-by. At one point, McDonald used the knife to slash the front tire of a squad car trying to block his path."[Emphasis added.]

A moment-by-moment account of what the Laquan McDonald video shows , By Annie Sweeney and Jason Meisner, Chicago Tribune, November 25, 2015

Chicago's turmoil is yet another a case of demonstrating—or rioting—not in the name of justice, but against justice.  We saw that in the Trayvon Martin case (a justifiable homicide against a juvenile delinquent making an unprovoked murderous attack) and the Michael Brown case (a justifiable homicide against a huge adult criminal making an unprovoked murderous attack).  While the "Black Friday" protests were largely non-violent (and Saturday protests drew only dozens of protesters) now that the officer who's been charged is out on bail, blacks are threatening more violence:

Lamon Reccord, [who is black] an organizer of the protests, expressed frustration that Van Dyke was able to post bail.

"I think the protests were largely peaceful, because he was in jail," Reccord said at a prayer vigil in front of police department headquarters Monday evening. "There's going to be a lot of anger. I want it to be peaceful, but I worry there could now be damage."

Another protester, Jedidiah Brown, an activist from the city's South Side who is black, said that Van Dyke's release sends the wrong message to Chicago.

"When Van Dyke walked out, what that said to me is that my life doesn't matter to this mayor and this city," Brown said.

(And, as in the Slager case, there has been a preemptive financial award a.k.a. bribe to the family even before the facts can be established in court).

What these In 2011, during some American-style (black American-style, I should say) riots in London,  the late Larry Auster wrote

It’s the usual script that we know so well in this country. Police are dealing with some violent Negro criminal, and are forced to kill him, and the black community rises up in violence.

I remarked at the time that this was true—most riots are caused by similar incidents. A lot of it involves fighting not for justice, but against it.

Did you know that the man whose arrest sparked the 1965 Watts riot was guilty of what he was arrested for—and resisted arrest? [Marquette Frye, Whose Arrest Ignited the Watts Riots in 1965, Dies at Age 42, by Burt A. Folkart. LA Times, December 25, 1986]

For more on this theme, see