Peter Brimelow visited Cleveland during the Republican National Convention, went to various functions there, including the famous party given by Milo Yiannopoulos, and was interviewed, or reported on by a number of media personalities, some of whom thought it shocking that he was present.

The Washington Post’s Dave Weigel was fairly civil, though. His piece The ‘alt right’ finds a home inside the Republican convention [July 21, 2016] starts out like this:

CLEVELAND — Geert Wilders strolled toward Quicken Loans Arena, drawing the usual amount of double takes. Clad in a trim blue suit, wearing sunglasses under his silver-blond coif, he stopped to talk to Rep. Steve King (R-Iowa) and a small crowd of foreign journalists began to gather.

“He heads the Freedom Party in the Netherlands,” King explained to a delegate who was wondering about the fuss. “A little bit of controversy here and there, but who among us hasn’t created some?”

That’s funny right there, as Larry the Cab 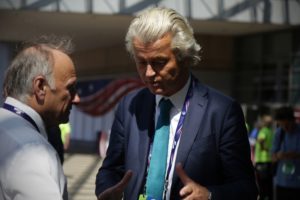 le Guy says. In fact, both King and Wilders have been the subject of enormous amounts of hate from different people. Since Wilders’s haters include Muslims, he has to have 24-hour security everywhere he is in the world. Steve King’s haters include La Raza, the MSM, and donorist Republicans, so he doesn’t have to worry so much about being literally stabbed in the back.

Many members of the “alt right,” racially conscious and opposed to new immigration, came to Cleveland with the same praise of Trump’s revolution. They held meetings, co-hosted parties and happily met the news media. Richard Spencer, the president of the National Policy Institute, held a cheeky sign encouraging journalists to “interview a ‘racist.’ ” Peter Brimelow, founder of the anti-immigration and race news site VDare, stopped by a Tuesday night party headlined by Wilders…

After Yiannopoulos accused Democrats of betraying gay people by allowing unchecked Muslim immigration, dance music filled the room. Brimelow, standing apart from the young crowd in a three-piece suit, retreated to a quieter hallway to praise how Trump had changed Republican thinking on immigration. He had given prime convention speaking time to politicians and grieving parents to decry murders committed by undocumented immigrants.

“The Republicans wouldn’t have dared do that four years ago,” Brimelow said. “The only reason you hear it now is because Trump has blasted his way through. Even if he is destroyed, like Barry Goldwater was, Goldwater blazed a trail for Ronald Reagan. There is a blue-collar vote for these issues.”…

Again and again, they delighted over the success of someone who laughed and fought harder when the old media gatekeepers called them racist or extreme.

“They’ve about used up their ammo, throwing that ‘racist’ word out,” said King, the representative from Iowa. “They’ve cheapened it. They’re going to have to come up with something else.”