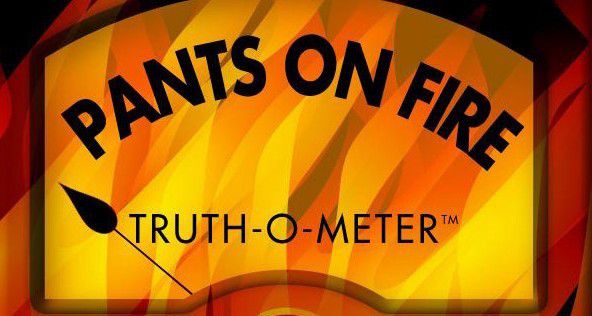 Daniel Greenfield, always good on immigration issues,  factchecks the Washington Post for FrontPageMag, and finds, not for the first time, that the Post's pants are on fire:

Here's a typical fake trending story spread by the Washington Post, which originated at BuzzFeed, and quickly spread to other outlets.

Federal judges received a link to an anti-Semitic blog post. It came from the Justice Department,—Washington Post

He quotes the Post  as echoing the claim made by Ashley Tabaddor that the word "kritarch" is somehow anti-Semitic, because of an imagined reference to the Book of Judges in the Old Testament, and goes on to say

Ashley Tabaddor has claimed to be Iranian-American. That was the basis for her case. I'm aware of no evidence that she's Jewish.

Vdare does host some anti-Semitic content, [We don’t feel that we do.] but Kritarch is a Greek term and is used to refer to rule by judges, not by Jews. Vdare uses it to describe a variety of judges.

Khan is obviously not Jewish.

Vdare refers to a variety of judges as Kritarchs. The term emphasizes that judges, rather than elected officials, are making laws.

The Washington Post repeated a false claim and helped spread it to the rest of the media. And, as usual, there are no fact checks, no social media sanctions or consequences, for spreading fake news.

So, by the way, is Hamed Aleaziz, the Buzzfeed reporter who made the original attack on us. His Linkedin profile describes him as a speaker of Persian, and he's published in Persianesque magazine.