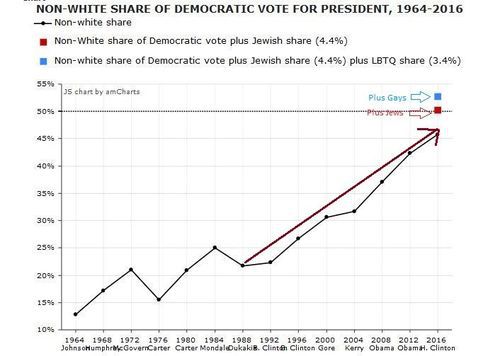 Is the Democratic Party reaching the “tipping point”—becoming so dominated by minorities that the remaining whites suddenly stampede for the exit, a phenomenon well-documented in neighborhoods and schools? Our interactive chart, prepared with the help of National Data columnist Edwin S. Rubenstein, makes clear the answer: “Yes.”

Despite Hillary Clinton’s visible failure to be Barack Obama, her Presidential vote was a record 45.8% non-white—continuing a dramatic and unbroken non-white surge that goes back now for 30 years. Less well known: factoring in the share of the Democratic vote that was Jewish (we estimate 4.4%) and homosexual (3.4%), 2016 was the first election in which a majority (52.7%) of the Democrat vote was not made up what might be called, for want of a better term, normal American whites.

[Note from Ed: Jewish vote based on CNN exit poll, which has Jews at 3% of the electorate and Clinton with 71% of their vote. LGBTQ vote data are from two sources: Pew (LGBTQ’s 5% share of the electorate) and NBC News (Clinton’s 78% share of LGBTQ vote.) I have adjusted to eliminate double counting, e.g. assuming non-Jewish whites are LGBTQ at the same 5% rate as the overall electorate].

Steve Sailer, more politely, put it this way on VDARE.com directly after the 2012 election:

…although Obama claimed to be a uniter in 2008, in fact his 2012 campaign was scientifically divisive. The Obama coalition of fringe elements in American society is united by one main driving force: resentment of the core groups in American society—such as married white people. Hence the vitriol from the victors since Tuesday, with much chest pounding about the long-hoped for death of white America.

(Emphasis added. This was the historic article in which Steve first pointed out that the GOP could easily have won the presidency in 2012 by getting a few more white working class votes in Rust Belt states—exactly the strategy that Trump employed in 2016).

One unmentionable reason that the fact Democrats have tipped is little-noted: the disproportionate representation in the Political Class, especially the punditocracy, of Jews, an overwhelmingly Democratic subgroup. Although Jews themselves often find it difficult to believe, the plain fact is that ordinary Americans possess almost no Jewdar at all—to them, the talking heads on CNN are simply whites. As a result, not surprisingly, these ordinary Americans get the impression that white Democrats are more numerous, and more vociferous, than is actually the case.

To some extent, the same camouflaging effect is also true with homosexuals—think Anderson Cooper, who presents as preppy scion of the Vanderbilt family. [Anderson Cooper: “The Fact Is, I’m Gay,” By Andrew Sullivan, The Daily Beast, July 2, 2012]

But, overall, this situation is unstable.

Firstly, non-white foot soldiers in the Democratic Party will eventually begin to demand that their leaders look like them, not like Nancy Pelosi. And campaigning for white votes in Democratic primaries is just going to get less important.

This will result in the nomination of candidates who cannot or will not make the effort to woo whites in the general election. Which was the subtext to black lawyer Stacey Abrams’ recent much-ballyhooed victory in Georgia’s gubernatorial primary: 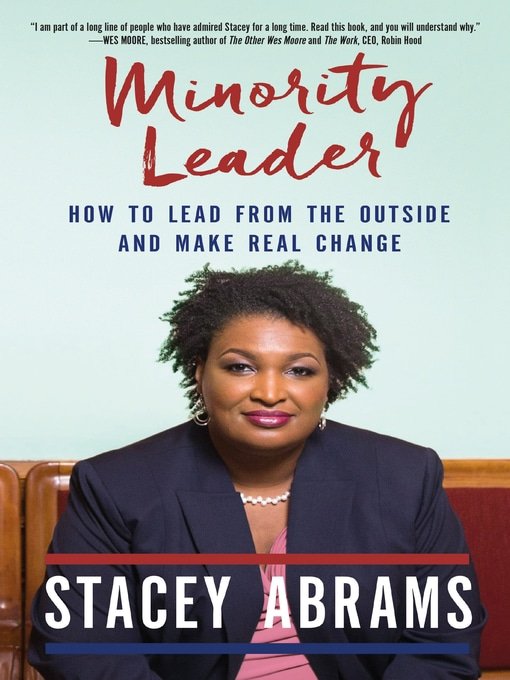 Ms. Abrams has signaled that she is unlikely to spend much time pleading with rural whites to return to a Democratic Party that they have largely abandoned. She has embarked instead on a strategy of energizing a coalition of young and nonwhite Georgians who represent a growing share of the state’s population, an approach national Democrats are watching closely as they grapple with how to reclaim the presidency.

And, right on cue:

One of the new council members in one of Georgia’s biggest cities picked Malcolm X over the Bible for her swearing-in….

“I think they saw it coming,” said Ms. Parker, who also raised her fist in a black-power salute while taking the oath. 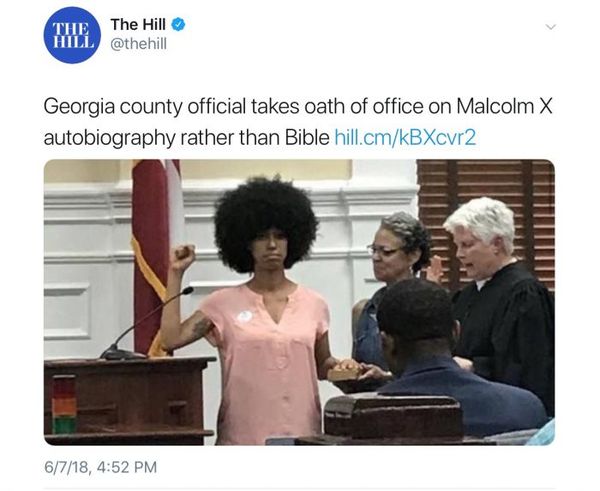 She is a 26-year-old doctoral student at the University of Georgia, in Athens, and won her race by just 13 votes. She campaigned for “bold, progressive leadership in Athens.”

Secondly, whites also will rebel—if only implicitly, perhaps unconsciously—against non-white domination. The internet is alive with testimonials from whites who supported Obama in 2008 but ended voting for Trump in 2016—for example

(You Tuber Julian Langness is the author of Identity Rising: How Nationalist Millennials Will Re-Take Europe, Save America, And Become The New 'Greatest Generation' .)

But examples known to me personally are harder edged—for example, an attendee at the 2017 American Renaissance Conference (!) who said: “It just became obvious there was no place for white men in the Democratic Party.”

Of course, historically one reason white men have gone to the Left—I don’t think I’m giving away any secrets here—is that the Left had easier women. But that benefit is being brought to a screeching halt by the #MeToo campaign, abetted by rapacious trial lawyers and lesbian man-haters, to pathologize heterosexual relationships.

And Hillary’s white vote was disproportionally (60%-40%) female. Again, this strikes me as unstable. As Gloria Steinem memorably put it during the Democratic presidential primaries: “And, when you’re young, you’re thinking, where are the boys? The boys are with Bernie...” [Feminist Gloria Steinem says young women support Bernie because they want attention from boys, by Elizabeth Bruenig, New Republic, February 6, 2016. Link added].

My guess: if young white men are being driven from the Democratic Party—as they are—young white women will eventually follow.

In the medium term, the beneficiary of this will be the GOP—or, as we call it at VDARE.com, GAP [Generic American Party], the default-mode party of the Historic American Nation. Of course, it doesn’t deserve it. But this is politics.

And, of course, in the long term, this tilting effect could be swamped by continued non-traditional immigration.

But even that will take longer than the punditocracy thinks.

Post
Notes on the Trans-Antifa Connection: They're Selling Baseball Bats, Axes, And Sledgehammers In Trans Colors