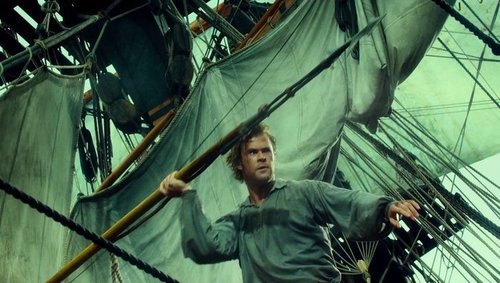 Let me recommend a rare movie that is positive toward historic America. See it on the big screen while it's still in the cinemas, not much time left.

In The Heart Of The Sea depicts an American whaling ship circa 1820.

The story opens with a happily married couple expecting their first baby, the ambitious father breadwinner is the kind of alpha male who built America. When whalers prepare to set sail from Nantucket, local ministers and faithful are dockside to publicly pray for their townspeople’s safety and success.

Whoever participated is portrayed realistically, including a few black freedmen and American Indians working for the Yankee whaling families. The author Herman Melville serves as a plot device, and shows American writers improving their craft.

The crucial role of whale oil to industrialization and lighting is depicted—not demonized. Director Ron Howard tells the story, staying out of the way, instead of imposing anachronistic modern environmentalist opinion. He shows the ship owners warts and all as stern businessmen yet tempted by greed. Dramatic camera shots of the ships at sea include the American flag unfurled in stout winds. The crew’s dangerous daily life is shown up close by expert camera angles and vivid audio. Encounters with great whales are so well done that I did not think about the special effects, instead, I jumped at the scary parts—I was completely taken in.

My new-found awareness of The National Question led me to watch the movie with eyes that saw the American founding stock, our people, are the story.

Might as well have my entertainment dollars vote in favor of this kind of movie.