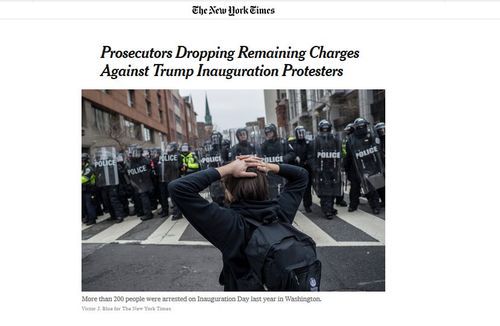 Rogue, Trump-hating federal judges conspire to force US Attorney Jessie K. Liu to throw in the towel against J20 communists and anarchists charged with rioting during President Trump’s inaugural.

Sometimes, you wish your predictions were wrong. I said it would happen.

WASHINGTON — The United States attorney’s office for the District of Columbia is dismissing the remaining cases against protesters arrested on the day of Donald J. Trump’s inauguration, ending a legal battle that began more than a year and a half ago. Federal prosecutors requested Friday in a motion that the charges against the remaining 38 defendants — including one journalist — be dropped. More than 200 people were arrested on Jan. 20, 2017, during demonstrations where some protesters threw rocks and bricks at police officers, set a car on fire and shattered storefront windows…. Twenty-one of the people arrested that day have pleaded guilty to charges related to violent protest, including one to felony offenses. That protester, Dane Powell, pleaded guilty to one count of felony rioting and one count of assaulting a police officer. He was sentenced to four months in prison, and was released in October. [“Prosecutors Dropping Remaining Charges Against Trump Inauguration Protesters” by Alexandra Yoon-Hendricks, New York Times, July 6, 2018.]

As for Dane Powell, in the immortal words of Derrick Coleman, whoop-de-damn-do!

The riot was openly planned for weeks on the Internet, and conspirators dressed in black and wore masks, Black Bloc-style. People who supposedly hadn’t engaged in violence (we’ll call them passive rioters) just happened to dress in the identical uniforms as those who had (the aggressive rioters), and just by another amazing coincidence, fell in marching with the active rioters after the latter’s attacks.

But there were no coincidences: Everything had been plotted on publicly accessible Web sites, and at meetings.

The riot organizers convicted themselves with their own words!

As I wrote last November,

The stakes could not be higher—either the law is enforced against America’s emerging totalitarian Alt-Left or they will succeed in suppressing debate in the public square as completely as they have already done in colleges. (Or, of course, patriots could fight back—in which case they may find themselves attacked by Democrat-controlled law enforcement, as in Charlottesville. This is anarcho-tyranny). Unfortunately, early signs are not all good. [“To Defend America—Will Inauguration Day AntiFa Rioters Get “Exemplary Sentencing’?”, VDARE, November 14, 2017.]

The defendants’ media stooges raged that their darlings could spend up to 70 years in jail, and gave space to the defendants to complain in their own op-eds of the injustice (and inconvenience!) of having to attend trials and defend oneself, instead of getting married and starting fancy new jobs.

Although some 235 suspects were charged with felony riot, and myriad other felonies and misdemeanors, none was held without bail (unlike the Charlottesville Unite the Right demonstrators), and only Dane Powell did any time.

Keep in mind that if law enforcement had simply enforced the District’s anti-mask law, all of the defendants would have … what am I talking about?! The defendants could have been dripping with policemen’s blood, and those criminal judges would still have put the kibosh on their prosecutions.

[Judge Leibovitz’] method for corrupting the verdict: muzzle prosecutors and witnesses from ever mentioning the terms “Antifa” and “Black Bloc,” calling them prejudicial—even though these are the terms that the movement itself uses [Inside The Trial That Could Determine The Future Of Free Speech In America’s Capital by Ryan J. Reilly, Huffington Post, December 10, 2017.]

Try making a persuasive argument—in or out of court—under rules in which you are not permitted to use the terms central to your argument. [Scandalous J20 Verdict: Sabotage by Judge Lynn Leibovitz Upholds Left’s Right to Riot=Another Step on Road to Civil War by Nicholas Stix, VDARE, December 22, 2017.]

It was thus impossible for the prosecutors to explain how the defendants operated.

If you’re a juror, and you cannot understand how the defendants are supposed to have committed the crimes in question, you must acquit.

During the first trial, Judge Leibovitz threw out the most serious charge, of felony riot, before the case went to the jury. Then, when the jury did exactly what the judge had manipulated it into doing, she said that that just showed how weak the prosecution’s case was. I prayed for a change of jurist, and my prayers were answered.

Be careful what you pray for.

The prosecution’s star witness was an undercover investigator who had infiltrated planning sessions of the conspirators. In a revolutionary ruling, the new jurist, Chief Judge Robert E. Morin decreed that the undercover investigator would have to testify using her own name, in open court. That would have ended her career, and put her life in danger.

If Judge Morin’s ruling becomes a precedent, it would end much of law enforcement’s drug investigations, and many other investigations and prosecutions of violent, organized crime.

Whatever it took to subvert justice, Judges Leibovitz and Morin did it.

Note that former D.C. U.S. Attorney Channing D. Phillips, who spearheaded the prosecutions, was a black Obama appointee! VDARE Editor-Publisher Peter Brimelow has for years reminded us that the legal remedy for rogue judges is impeachment. So, what’s keeping you, President Trump? Stop listening to Ivanka, and listen to your patriotic supporters, who have the law, the nation’s vital interests, and your own political welfare on their side.

Or are you a two-for-one, blue plate special?

Our hope at VDARE was that the J20 riot prosecutions would serve as an opportunity for the criminal justice system to engage in “exemplary sentencing” of seditionists. Instead, the system has been celebrating the seditionists of the Inauguration and Charlottesville, while conspiring to violate the civil rights and engage in exemplary sentencing of the Unite the Right Charlottesville demonstrators!

When “the law” conspires to bring about the rule of crime, anarchy, and sedition, we may no longer be inching ever closer to civil war; the civil war may already be here, led by mobs in black robes.