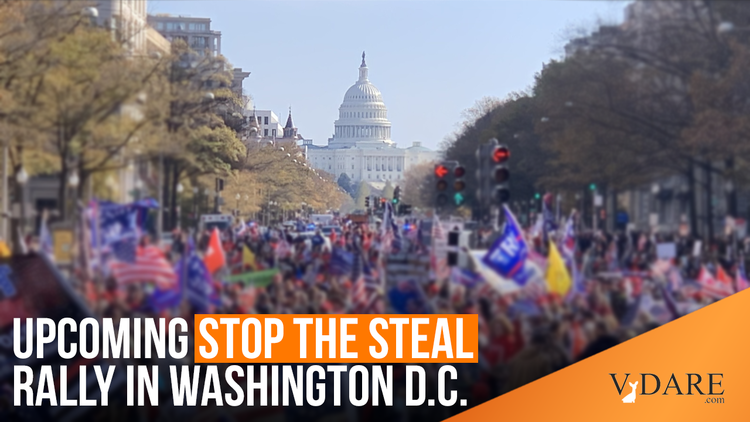 Crossing The Potomac? No, Trump Isn’t Caesar—But He’s Building A Resistance That Will Last

Earlier (January, 2017) : "It Will Come To Blood"—Reflections On The Left's Anti-Trump Inauguration Tantrum

The Main Stream Media seems oddly silent about the upcoming pro-Trump rally in Washington D.C. this Saturday [Trump supporters plan DC rally to 'demand transparency' before Electoral College vote, by N'dea Yancey-Bragg, USA TODAY,  December 10, 2020] Perhaps they were dismayed by the extraordinary success of the November 16 Stop The Steal Rally march, or maybe they’re just preparing to downplay the usual Leftist violence. But I’m planning on attending the rally. I see great potential in the grassroots movement that has been energized by President Trump. It will outlast him and give shape to the legitimate resistance (as opposed to the Left’s pop culture #Resistance) that will emerge in response to any Biden/Harris Regime.

We’re going to get one form of Caesarism or another. It will either be a heroic personality who can save the Historic American Nation—or it will be a more unaccountable, dishonest, and concealed class dictatorship ruling over a glorified shopping mall.

Let’s be clear about one thing at the beginning – President Trump, several states, and 106 Republican congressmen are simply raising legitimate legal challenges entirely within the existing framework [106 House Republicans back Texas challenge of election results at Supreme Court, by Melissa Quinn, CBS News, December 10, 2020]. There’s nothing radical about this. Of course National Review is characteristically sounding retreat [Texas’s Frivolous Lawsuit Seeks to Overturn Election in Four Other States, by Andrew McCarthy, December 9, 2020]. But there’s no reason the GOP/GAP should go along with election results that are this suspicious, based upon rules that were made up on the fly during unprecedented circumstances.

As Ann Coulter noted just yesterday, election fraud has been used by Democrats to capture seats for many years now. All Trump and at least some Republicans are doing is fighting back—for once.

Yet there’s a deeper, more fundamental issue. The GOP Congressmen backing Trump are being called “traitors,” a term which was trending a.k.a. approved by the censors on Twitter yesterday [Meet The 106 House Republican Traitors Who Betrayed America For Trump, by Jason Easley, PoliticsUSA, December 10, 2020]. In its countersuit against Texas, Pennsylvania accused the Lone Star State of a “seditious abuse of the judicial process.”

Again, one must ask… treason to what? Sedition against whom? Once in office, Joe Biden wants to essentially abolish what few barriers remain to mass immigration, essentially displacing the American people in their own country. The names of the Founding Fathers are being torn down from schools and streets all over the country. The Chinese calmly describe the reality of the American “Deep State which really runs the show here,” the American government openly prefers foreigners over American workers. And now we discover that the financial ties between China and Hunter Biden, which the MSM suppressed during the campaign, were all real [Both of the Media’s Reasons for Suppressing The Hunter Biden Story Turned Out To Be ‘False,; by Shelby Talcott, Daily Caller, December 10, 2020].

Is there an America left to defend or rebel against? Pundits imply that there is and that President Trump is somehow undermining it. For example, there’s now one of those curiously coordinated waves of hit pieces against Trump supporters, this time the “Oath Keepers”:

The lede from the supposedly “conservative” Washington Times:

Militiamen, white nationalists, and so-called Proud Boys are set again to be among the supporters of President Trump participating in protests being held for him this weekend around Washington D.C.

In contrast, in Portland OR, there’s been yet another “autonomous zone” set up within a major city [Protesters Erect New Autonomous Zone in Portland to Prevent Black Family’s Eviction, by Matthew Impelli, Newsweek, December 8, 2020] with “activists” warning journalists not to take photos or videos [Portland protesters warn people not to film red zone ‘autonomous zone,’ by Natalie O’Neill, New York Post, December 10, 2020].

And of course the “journalists” will comply. They are too busy writing stories about how the president is supposedly creating a threatening environment among Republicans [As Trump Rails Against Loss, His Supporters Become More Threatening, by Nick Corasanti, Jim Rutenberg, and Kathleen Gray, New York Times, December 8, 2020]

But at the same time, reporters shrug at an explicit statement from a Democratic state senator telling “soldiers” who “know how to do it” to make Trump supporters “pay” [Detroit lawmaker says video wasn’t meant to threaten Trump supporters, but she doesn’t regret it, by Malachi Barrett, Michigan Lives, December 9, 2020].

Somehow, amidst all of this, it’s Trump who is being accused of authoritarianism [Despite drift toward authoritarianism, Trump voters stay loyal. Why? By Edward Lempinen, Berkeley News, December 7, 2020].

Yet the fact is that, whatever Trump’s virtues and achievements—and they are not nothing— he’s unquestionably been the weakest president in recent history.

There is a virtual industry of former supporters, friends, or business partners cashing in on past relationships with Trump and being hailed as heroes on MSM programs. Major Big Tech platforms censor him, not his opponents. He doesn’t even seem to control his own Administration, let alone the country.

In his response to the COVID-19 pandemic, President Trump was far too open and it is his supporters who are protesting lockdowns, forced vaccination schemes, and travel restrictions. If Donald Trump really were an authoritarian nationalist, he was given a priceless opportunity to seize power. Instead, he largely governed as a conventional conservative, even a classical liberal.

President Trump clearly projects strength and looks like what we think a nationalist should be. However, he hasn’t actually followed up on these things. Consider these failures:

Boomer, all too Boomer. President Donald Trump mastered not the Art of the Deal, but the art of public relations. He was a media hero for decades, but I suspect he never quite learned that a single man can’t take on the entire Main Stream Media. Instead, he’s still playing by the old rules, and seems stunned that his side isn’t getting a fair hearing.

Thus, recently pardoned Michael Flynn’s call for President Trump to use Lincoln-like tactics to save the country and re-do the presidential election seems wildly unrealistic [Freshly pardoned Michael Flynn shares message telling Trump to 'suspend the Constitution' to hold a new presidential election, by Kathryn Krawczyk, The Week, December 2, 2020]. If President Trump was the type of man who could metaphorically “cross the Rubicon” and declare martial law, he wouldn’t be in this position to begin with.

In any case, action against media monopolies and ensuring social media access for his supporters would have been a far more effective tactic than legal maneuvering anyway–and this should have been prioritized day one.

I have no doubt the Supreme Court will simply duck the Texas case. Chief Justice John Roberts is yet another “conservative” appointee who has shifted left once taking the big chair, and most other justices are similarly unimpressive.  Even proven fraud is being ignored and, without free speech online, the evidence can be censored.

However, that doesn’t mean the Sorelian Myth of a nationalist march on Washington, or Trump crossing the Potomac in lieu of the Rubicon, isn’t useful. After all, we already know the outright tyrannical measures that the Democrats are openly planning to impose on the American people. It is important that ordinary Americans recognize the coming Regime is illegitimate, that the GOP failed them and that, if President Trump lost, it was because he was too cautious and compromising, rather than audacious and bold.

Before even discussing breaking up the boundaries within states, forming a Third Party, taking over the GOP, or even the extreme solution of secession, people need to believe that resistance is at least possible.

And, as Peter Brimelow always reminds me, we just don’t know what Trump will do. The former casino owner might, out of sheer self-preservation, decide to throw it to the wind and declare alea iacta est—or at least give the Ruling Class one more hysterical fit.