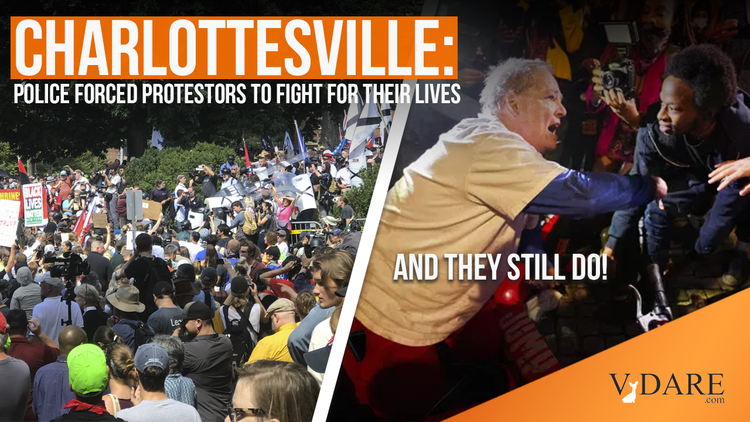 I Warned Them! MAGA Marchers Hit By Same Leftists Enabled By Charlottesville. Patriots Are On Their Own

From President Trump’s 2017 Inauguration to 2020’s Million MAGA March, Antifa and their journalist allies have been testing to see what they can get away with—and the answer is literally everything. Trump’s inauguration was the scene of open political violence that was celebrated as the birth of the “punch a Nazi” meme. At the Charlottesville Unite the Right in 2017, government collusion with Antifa violence was ignored in favor of a politically useful myth about fascists “attacking” a town. This myth then became the basis of Joe Biden’s campaign, even though the worst scenes from Charlottesville—from sprawling street brawls to drivers barreling through threatening crowds—have become so commonplace in the summer of BLM they are not even worth mentioning. Finally, this past weekend featured by Trump supporters being attacked within the capital city itself, with the president reduced to pleading on Twitter for the DC police to do their job. But they didn’t and they never will—because Trump, Republican elected officials and Conservatism Inc. have made it clear that they consider letting their own supporters be attacked in the street is less risky than actually using government power to defend them.  Patriots, of all shades, are on their own.

VDARE.com Editor Peter Brimelow saw what seemingly no one else did on Inauguration Day—that the Leftist violence taking place as President Trump took office would be just the beginning. There was the usual rioting and property destruction and, of course, Richard Spencer being punched in the face while doing a TV interview. (Significantly, it was on camera, but no one was ever arrested). One would think that journalists would denounce sucker-punching someone being interviewed by a journalist, but in fact many publications then and afterward were either neutral or outright celebratory:

(Of course, I’m sure many Americans would enjoy hearing “the debate over punching journalists in the face, explained.” Yet somehow I doubt the Fourth Estate wants that conversation.)

Still, many Republicans and conservatives moved on, because it was just “a neo-Nazi” who was punched. They weren’t like that.  When the overwhelmingly majority of those arrested in the Inauguration Day riots had their charges dropped many months later, no-one noticed except VDARE.com's Nicholas Stix.

In August 2017 in Charlottesville, demonstrators who wanted to protect the statue of Robert E. Lee received a permit for a rally which the police failed to defend and closed down after it became a melee. Things culminated when James Fields hit a crowd with his car, killing Heather Heyer and receiving more than four centuries in prison for the crime.

What allowed this to take place? Ultimately, an independent report from the city of Charlottesville itself concluded that city authorities, notably then-police chief Al Thomas, actively sought violence. “Let them fight,” he said, “it will be easier to declare an unlawful assembly.” This resulted in police shoving UTR demonstrators into Antifa, predictably leading to wild brawls.

President Trump blamed both sides for violence, though he took care to denounce “the neo-Nazis and the white nationalists” whom he said “should be condemned totally” [Fact Check: Joe Biden Repeats The Charlottesville ‘Very Fine People Hoax’; Lester Holt Does Not Correct, by Joel Pollak, Breitbart, October 5, 2020]. However, that was not what the MSM chose to hear. Instead, since August 2017, through the presidential campaign, and even until now, we have been told that President Trump called neo-Nazis “very fine people.” Joe Biden made this accusation repeatedly during the campaign. Indeed, he said that the president’s “moral equivalence” between “those spreading hate and those with the courage to stand against it” was one of the reasons he ran [Joe Biden: “America Is An Idea," Washington Post, April 25, 2019].

This is as Orwellian as the candidate of Affirmative Action and Black Lives Matter faulting President Trump because he’ll “go on dividing us based on race” [‘This Week’ Transcript 2-9-20: Joe Biden, Pete Buttigieg, Sen. Elizabeth Warren, ABC News, February 9, 2020]. Antifa have been airbrushed out of these events, with Joe Biden commenting that Antifa are just an “idea” [Biden Says Antifa Is “An Idea, Not Organization" during Presidential Debate, by Brittany Bernstein, Yahoo News, September 29, 2020].

In the bizarro world of American politics that we are entering, “hate” is evidently not a universal emotion but something concrete that can move around and cause our country’s problems. In contrast, groups that call themselves Antifa don’t even exist.

But then, to the stupefyingly braindead American Conservative Movement, Antifa aren’t communists or anarchists either. Instead, as Dinesh D’Souza tells us, American conservatives are the true “classical liberals” and the anti-fascists are another variety of fascists [The Fascist Roots of the American Left, by Dinesh D’Souza, The Daily Signal, August 3, 2017].

It’s worth noting that President Trump has not pardoned General Michael Flynn, Congressman Steve Stockman, or even Michael Cohen (if only to save himself from the latter turning on him.) However, President Trump did pardon Dinesh D’Souza after the latter’s conviction on campaign finance law violations [Dinesh D’Souza: Why did Trump pardon the provocateur, by Anthony Zurcher, BBC, May 31, 2018].

Unlike in 2016, President Trump went into the 2020 election with the support of the Conservative Establishment rather than as a populist who was running against Republicans and Democrats.

We’ve seen what good that did him.

If there is one belief (or, rather, slogan) that defines American conservatism, it’s “limited government”—at least when it comes to things other than waging forever wars overseas. True to this tradition, President Trump didn’t really do much of anything when the Black Lives Matter protests started, despite repeated tweets about “Law and Order.”

In late May, President Trump said he would designate “Antifa as a Terrorist Organization” [Trump says he will designate Antifa a terrorist organization as GOP points fingers at extremists, by Allan Smith, NBC News, May 31, 2020]. This didn’t happen. Instead, far from being a “terrorist organization,” Antifa enjoy a remarkably privileged status, rioting and committing crimes with impunity in cities around the country:

The main effect of the BLM movement has been to enrich a few academic and media mediocrities at the cost of getting a bunch of black people killed, along with at least two Trump supporters.

The indifference of local authorities, journalists, and the “community” is to be expected. However, there has been some activity on other fronts. In San Francisco, it’s now illegal to call the police if it is “racially motivated,” whatever that will be determined to mean. In Wisconsin, the same law enforcement that allowed riots to take place in Kenosha leapt to arrest Kyle Rittenhouse for doing the job they wouldn’t. Held without bail, he might as well be convicted already. Finally, the incoming Harris Administration (let’s be honest about it) is gearing up to introduce all sorts of new restrictions on the law-abiding, including imposing surveillance and legal restrictions on citizens who are responsible for “anti-immigrant manifestos” (like VDARE.com?) [Combating Violent Hate, KamalaHarris.org, Archived].

The usual endemic urban violence will be ignored or denied.

And this includes violence against patriots who have the temerity to show up in our increasingly Third World cities. When thousands of Trump supporters arrived in Washington DC to support the president this past weekend, they only enjoyed safety in the daylight. At night, the same Antifa groups we are told do not exist attacked people around the city. Even if they were women, children, or elderly, MAGA conservatives suddenly discovered there was no difference between them and Richard Spencer as far as their attackers were concerned [Antifa/BLM Terrorists Viciously Attack Women, Children, and the Elderly, by Debra Heine, American Greatness, November 14, 2020].

Denouncing political violence is not about agreeing with this person or that—it’s about protecting the rights and safety of all citizens. That line has been crossed. To pretend “the rule of law” still exists is stupidity at best. More likely, it’s deliberate disingenuousness.

President Trump blustered that “ANTIFA SCUM ran for the hills,” but such chest beating looks frankly pathetic after four years. Every patriot and every white person in America now know that even if you defeat Antifa in the street, their media and legal allies will make sure no victory goes unpunished.

The Harris Administration (I’m questioning whether they’ll even let Sleepy Joe take the Oath of Office) will be far more willing to use state power than was our unbearably timid Commander-in-Chief. Some conservative pundits might grandstand on social media (if they are still permitted a platform) but it is clear they will do nothing effective to defend legacy Americans’ civil rights.

The sad part: President Trump still is the best Republican who exists on these issues—even if he just limits himself to talking or tweeting. We’ll want him back after he’s gone.

Whether you are Alt Right, Dissident Right, America First, MAGA, Republican, or just some hapless urban liberal wondering why people suddenly can smash your business or sucker-punch you, the lesson is clear. From Inauguration Day to Charlottesville to the Million MAGA March, the System has told you again and again that it will not protect you. It will not allow you to protect yourself.

You’re on our own.  I tried to warn you.

Now, it’s going to get worse.