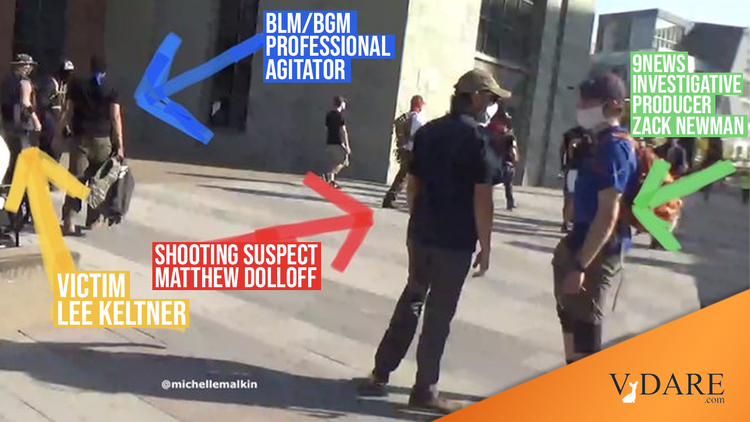 On a sunny Saturday afternoon, after gathering with Benghazi Marine hero John "Tig" Tiegen at Civic Center Plaza in Denver to show pride in America, hundreds of citizens departed a peaceful "Patriot Muster" feeling inspired. They filed out of the park bedecked in Old Glory, Thin Blue Line flags and MAGA hats. Some came in wheelchairs and walkers. Students, parents and grandparents all rallied. Military veterans turned out in force.

Remember: three months ago, the "Back the Blue" rally that I attended with hundreds of others at the very same Civic Center Plaza was shut down by violent antifa and Black Lives Matter vigilantes.

Remember: the Denver police union president, Nick Rogers, blew the whistle on how top brass (led by a police chief who marched arm-in-arm with BLM protestors this summer) issued a retreat order while the mob trampled our constitutional rights to free speech and peaceable assembly.

This time, Tiegen's event went more smoothly. Barriers kept rioters from invading the plaza. Casper Stockham, a Black Republican congressional candidate who had also attended the "Back the Blue" fiasco, told me one prominent Black militant agitator called him a "house n---a" and challenged him to a fight. The provocateur wore a "Black Guns Matter" T-shirt to deceive the conservative, pro-Second Amendment crowd. The same cretin later threatened to rape female attendees.

"It was disgusting, but those types of things don't stop me," Stockham told me. The "Patriot Muster" almost went off with a single hitch. Almost.

One man who answered the call to "stand up and show up" didn't make it home. From my close analysis of footage and interviews with witnesses, it appears the tragedy was engineered.

As the last group of "Patriot Muster" attendees walked to their cars, the same agitator who accosted Stockham and others also initiated a verbal altercation with 49-year-old Lee Keltner. A cheerful cowboy hat maker, veteran, and father of two from Brighton, Colorado, his mission was "keeping the West alive, one hat at a time." While Keltner was trailed by the Black militant agitator, a Trump-hating Occupy Denver radical named Matthew Dolloff and a local NBC affiliate investigative producer for Denver's 9News named Zack Newman conferred with each other nearby. At some point, Dolloff handed his cellphone to Newman.

Minutes later, photographers and videographers filmed the agitator aggressively daring Keltner to deploy a can of bear spray he was holding to protect himself as Dolloff and Newman stood by. Keltner resisted engaging in any physical brawl as the agitator escalated. Mere seconds later, he walked away from the agitator only to walk right into what appears to be a deadly ambush with Dolloff. In an instant, Dolloff appeared to grab for something on Keltner's chest (his holstered weapon?) while Keltner slapped at his face. Dolloff then whipped out a gun and blew off Keltner's face as the veteran backed away, spraying his repellant in self-defense.

Newman gawked at the entire melee with two phones in his hand. But photos showed him, bizarrely, not filming the shooting despite being there on assignment for 9News.

Dolloff has been detained under investigation for first-degree murder. Newman was held, and then released. Here's where it gets weirder and darker. 9News initially identified Dolloff as an armed private security guard contracted through Pinkerton security services. Turns out that he was unlicensed and operating as a security guard illegally in Denver. Pinkerton denied Dolloff was an employee and refuses to name the company, if one exists, that subcontracted Dolloff out. Newman did not respond to my questions about the exact nature of his relationship with Dolloff or how many previous times Dolloff had been his "security guard" at left-wing protests and riots over the past year.

Unanswered questions are piling up:

What happened to Colorado patriot Lee Keltner should be a national outrage. It was, in my view, a brazen and cold-blooded media-political assassination. Casper Stockham agrees. "Imagine if this shooting had been the other way around," Stockham said. "There would be nonstop, 24-hour coverage of it." But because Keltner was part of the "Patriot Muster," and not part of the "Mob Muster" or "Liberal Media Muster," you'll hear nothing but crickets from American Pravda. Their silence is violence.