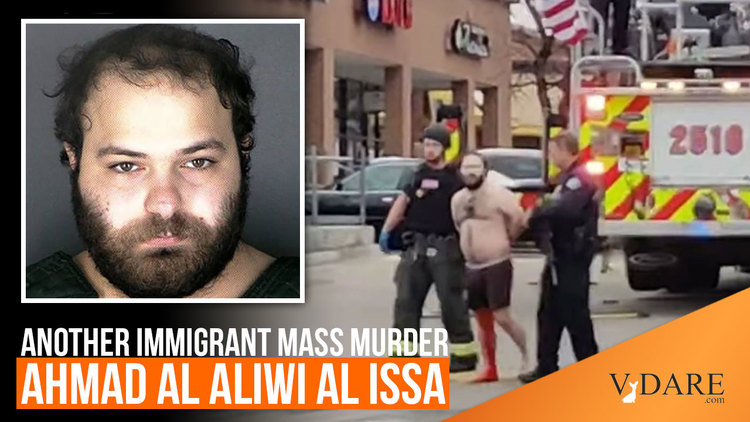 Another Muslim (Immigrant) Mass Murder, which is predictably being used to attack the gun rights of Regular Americans…and not for an Immigration Moratorium. I’ve done two posts about Ahmad Al Aliwi Al-Issa, the Muslim gunman in Boulder, Colorado, but this isn’t about him. It’s about the MSM, the Treason Lobby, and the Left’s lack of connection to reality.

In killing ten people because he hated whites, Donald Trump, and America, Al Issa was engaging in normal behavior for a disgruntled, disaffected Muslim in America—whether immigrant or “home-grown.” (Al Issa was, according the NYT, “born in Syria in 1999.”)

In using this to advance the cause of gun control for white Americans (black Americans can get guns illegally) the Left is engaging in normal behavior for people who hate Americans and love aliens.

President Biden said Tuesday that he was “devastated” by the killing of 10 people at a grocery store in Boulder, Colo., and called on Congress not to “wait another minute” in enacting legislation to ban assault rifles and high-capacity ammunition magazines.

“This is not and should not be a partisan issue — it is an American issue,” a somber Mr. Biden said in brief remarks delivered in the State Dining Room at the White House. “We have to act.”

Actually, of course, it’s (at least in this and too many similar cases) an immigrant issue.

And it has all happened before. In 1997 Empire State Building gunman,  Ali Hassan Abu Kamal, a Muslim immigrant from Gaza, shot 7 people (only one died) for Muslim reasons. At the time, the New York Police Department ignored the Muslim motives, so we didn’t find out until 10 years later [Killer's daughter admits it was political, by Mahmoud Habboush, New York Daily  News, February 20, 2007, Explaining the Murder Rampage atop the Empire State Building  by Daniel Pipes, DanielPipes.org, February 18, 2007]

The NYPD couldn’t announce the shooter’s Muslim motive (the story below, from 1997, is an unofficial leak) but they could try to restrict the right of Floridians to buy guns.

Tonight, Associated Press reported that a high-ranking police source said a rambling note found in Abu Kamal's pocket blamed the United States for using Israel as "an instrument" against Palestine. It also expressed anger at France and Britain and indicated that Abu Kamal planned to vent his anger at the Empire State Building, according to AP.

As I noted in 2001 in my first column after 9/11, when Ali Hassan Abu Kamal opened fire on the top deck of the Empire State Building, then-Mayor of New York, Rudy Giuliani, (who had made New York a Sanctuary City), called for restrictions on the freedom of …Americans.

At City Hall, Giuliani attempted to shift the focus toward gun control. He was accompanied by Rep. Carolyn McCarthy, D-N.Y., whose husband was killed and son wounded in the 1993 shootings [by Jamaican immigrant Colin Ferguson] on a Long Island Rail Road commuter train that killed six people and wounded 17.

In both that incident and Sunday's shooting, the gunmen circumvented New York's strict gun control laws by traveling out of state to buy the murder weapons, officials said.

"New York State, New York City have great gun control laws," McCarthy said. "But as the mayor said, we cannot control all the guns that are coming in from other parts of the country and that's what has to be stopped."

It never occurs to them to limit America’s intake of people from murderous places like Jamaica and Syria.

It turns out, by the way, that the FBI knew that that this particular Muslim immigrant was a threat. This is what Mark Steyn likes to call the “known wolf” as opposed the “lone wolf” narrative:

The suspect’s identity was previously known to the F.B.I. because he was linked to another individual under investigation by the bureau, according to law enforcement officials.

[Suspect in hand, investigators hunt for a motive in the Boulder shooting, NYT, March 23, 2021]

NYT: “The suspect’s identity was previously known to the F.B.I. because he was linked to another individual under investigation by the bureau, according to law enforcement officials.”
https://t.co/oI6hJVN1cs

That’s the kind of thing that inspired Ann Coulter say this about Chattanooga gunman Muhammad Youssef Abdulazeez, a Muslim from Kuwait who murdered four US Marines.

Instead of paying the FBI to follow certain immigrants for years, how about not admitting them in the first place? https://t.co/tgmZPnIS63

And of course, Colorado, which is a strong gun rights Red State, is thinking of enacting new gun laws—which it did in 2013 after the Newtown Massacre, and the backlash from that led to some anti-gun Colorado politicians being recalled, as I recounted in After The Successful Colorado Recall We Ask “Why Can Gun Grabbers Have A 'Moral Panic' After An Immigrant Mass Murder, But Immigration Patriots Can’t?”

And of course, that’s the question here. Here’s a list, from VDARE,com’s Immigrant Mass Murder FAQ, of all the mass murders we’ve recorded committed by Muslim immigrants:

Briefly, the answer to mass shootings: be armed and fight back, and to apply capital punishment to surviving murderers.

The answer to Muslim mass shootings and other mass murders (Muslim terror types are also fond of bombing and running people over with cars and trucks): restrict Muslim immigration, and expel as many of the Muslims now here as possible.

It means starting with yanking the employment visas and Green Cards from immigrant from Muslim countries—the same list used by both Trump and Obama for “travel bans”—after which they can get on a plane and go back where they came from.

Here are some articles we’ve written after specifically Muslim atrocities.

That last one, which is about the London Bridge Attack in June 2017, in which three Muslims in a white van ploughed into a crowd and then started stabbing people, comes with a quote from VDARE.com's editor Peter Brimelow:

See you here again, until America comes to its senses over (a) race and (b) Muslim immigration, which may be some time. 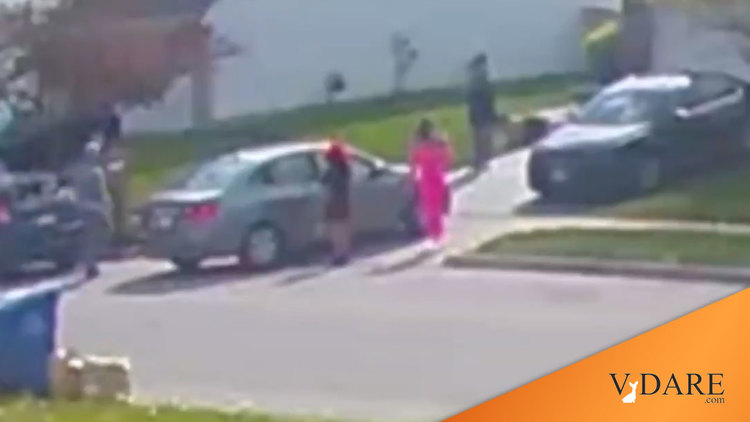