DAILY BEAST Attacks Rohrabacher For Saying YouTube Gunwoman Might Be Illegal—Doesn't Say She WAS Immigrant, Legality Unknown, From Iran

At USA Today, they're really more interested in what kind of gun Nasim Aghdam was using than what country she came from or why she was in America, but they manage to get that stupidly wrong:

Nasim Aghdam, 39, a San Diego resident, used a .99-mm handgun in the shootings. Two of her victims were treated and released and the third was in critical condition, according to San Bruno police chief Ed Barberini.[YouTube shooting suspect Nasim Aghdam was 'upset' with video site's policies, police say, by Kim Hjelmgaard, USA TODAY, April 4, 2018  (Archive link)]

Lots of guns are made in  9 MM, with a bullet about third of an inch in diameter, which uses the same kind of barrel as an American .38 Special. A .99 MM gun would fire a bullet with a diameter less the than the thickness of a dime. (Reporter Hjelmgaard is not a lady reporter named Kim—that's one stereotype of ignorance about guns—but a European male correspondent—that's another. He should at least know what a millimeter looks like.)

This is a reminder of what Michael Crichton called the Gell-Mann Amnesia effect. His friend Murray Gell-Mann, the physicist, would often see reports about physics in the papers which made statements almost as stupid as "wet streets cause rain",  and you see the  journalist "has absolutely no understanding of either the facts or the issues" and then you

turn the page to national or international affairs, and read with renewed interest as if the rest of the newspaper was somehow more accurate about far-off Palestine than it was about the story you just read. You turn the page, and forget what you know.

And that's just the press being stupid!  What happens when they don't want to tell you? In this case, USA Today does disclose where Aghdam came from:

Aghdam, according to her father, was an animal lover and campaigned for vegan-related issues. He told the Bay Area News Group the family emigrated from Iran in 1996 and his daughter had shown no previous signs of being inclined to violence.

That's paragraph nineteen—second from the end. 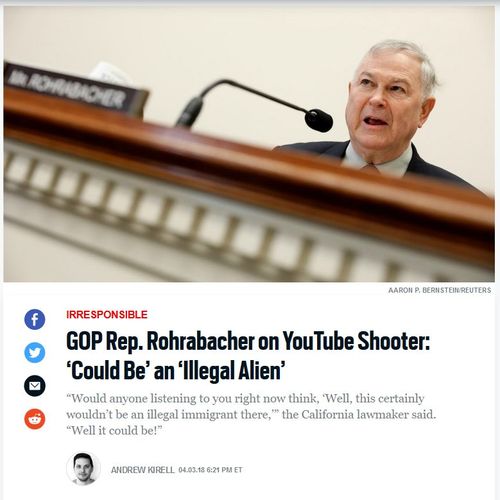 The Daily Beast attacked Dana Rohrabacher for saying that a crime in a sanctuary city might be committed by an illegal—frequently true, although they attack him for saying it "without a shred of evidence", which is something you're only supposed to use on imaginary right-wing terrorists:

Following reports of a shooting at YouTube’s headquarters Tuesday afternoon, a Republican congressman almost immediately speculated that the perpetrator “could be” an undocumented immigrant.

Appearing on the Fox Business Network to discuss immigration policy, Rep. Dana Rohrabacher (R-CA) was asked by host David Asman to pivot to discussing the shooting in San Bruno, California.

The congressman’s take was to connect the shooting—without a shred of evidence—to the Bay Area’s liberal immigration enforcement.

But nowhere in the Beast article do they say anything about the fact that Aghdam was an immigrant, and we have no knowledge of whether she was a legal immigrant or not—lots of people come from Iran illegally, and then apply to be refugees.