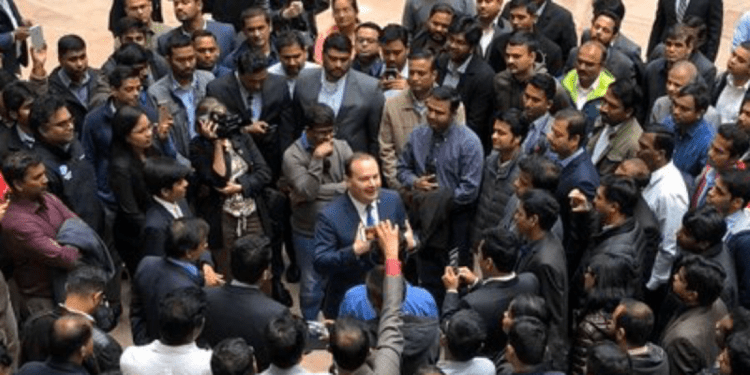 Sen. Mike Lee Is No Immigration Patriot, And A Very Bad Choice For the U.S. Supreme Court

You have to wonder about The Donald sometimes. He’s the Historic American Nation’s only hope, but he seems bent on self-destruction. Consider a man on his short list of nominees for the U.S. Supreme Court, Utah Sen. Mike Lee. He champions handing American jobs to Indian immigrants. He opposes President Trump’s national emergency declaration and voted to block it again last week. Even worse, in 2016, he declared himself a NeverTrumper. But he was, strangely, among Trump’s possible picks to replace retiring justice Anthony Kennedy. Trump, of course, chose Brett Kavanaugh. But given the very strong possibility that Associate Justice Ruth Bader Ginsburg’s career might end soon, it’s worth looking at Lee’s anti-Trump treachery. He might still be a possible pick [Sen. Mike Lee and his brother, Utah Supreme Court Justice Thomas Lee, on Trump’s short list to replace Kennedy, by Thomas Burr, Salt Lake Tribune, June 27, 2018].

Last week, he tweeted a photo of himself surrounded by dozens of Indians— and I don’t mean Apaches—to promote the Fairness for High-Skilled Immigrants Act.

Great talking to all the supporters of S. 386 today, the Fairness for High Skilled Immigrants Act. It’s far past time to end country based discrimination in our nations immigration policy. pic.twitter.com/nn5LdpJON8

The act would eliminate country caps on visas that prevent a few nations from monopolizing the system. Without the caps, Indians would hog at least 75 percent of all employment visas. Big Tech could keep replacing Americans with low-wage foreigners. The tech tyrants would keep lining their pockets at the expense of American workers.

Immigrants make this country stronger and our economy more dynamic. As a first step toward needed comprehensive reform, I urge the Senate to move quickly to pass the Fairness for High-Skilled Immigrants Act. The contributions of these workers are critical to America’s future.

Sen. Lee co-wrote the bill with California Sen. Kamala Harris, who’s clearly no friend to the historic American nation—her mother is an Indian immigrant, her father a Jamaican. Lee has worked tirelessly to get the bill passed and smooth-talked fellow Republicans into supporting it. Nearly all do, including immigration patriots Tom Cotton and David Perdue, who should know better. The last hurdle for Lee is Democrats like Sen. Dick Durbin who want the bill to expand the number of green cards awarded.

The Utah senator defended the bill in September with the Business Uber Alles mindset. “The employment-based visa system is supposed to enable American businesses to bring the best and the brightest to this country,” Lee said in a Senate floor speech. “Yet under the per-country caps, a factor that has nothing to do with a person’s skills or merit distorts the recruitment process. This weakens the merits-based portion of our immigration system” [High Skilled Immigrant Visa Live UC Remarks, June 27, 2019, Lee.Senate.Gov].

The same day of his Indian photo-op, Lee was one of 10 Republicans who voted to overturn Trump’s veto of a bill that blocked his emergency declaration over the border crisis [Senate fails to override Trump veto over emergency declaration, by Jordain Carney, The Hill, October 17, 2019]. In March, Lee grandstanded against the declaration. “That’s not governing—it’s ruling,” Lee huffed [Floor Remarks on Emergency Declaration, March 15, 2019, Lee.Senate.Gov]. Congress wouldn’t act, so the president was forced to use his executive powers to protect our nation’s borders with the declaration, then reallocate military funds to build the wall. But Lee wants to virtue signal about “limited government,” a 60-year-old Conservatism, Inc., hobbyhorse that converts no one and has done nothing to stop the growth of the bureaucratic Leviathan.

But even worse, Lee’s Big Tech boosterism extends to exempting them from antitrust laws. He once supported tough measures against Google’s monopoly, but now he thinks megacorporatism is just fine the way it is. He has consistently opposed investigations into Big Tech’s antitrust violations. This flip-flop, as Tucker Carlson noted, is likely the result of Facebook and Google investing heavily in Utah and making major contributions to Lee [Mike Lee, Google, and a Curious Antitrust Flip-Flop, by Adam Candedube, RealClearPolitics, August 29, 2019]. Of course, the big bucks that flow into Lee’s campaigns also explain his backing Big Tech’s Open Borders agenda.

Sen. Lee’s immigration record hasn’t been that shabby. He rates a career B+ from NumbersUSA, although his current term rating has declined to a C. He voted against the Gang of Eight amnesty in 2013 and supports tough border security measures. He also supported Rand Paul’s bill to eliminate birthright citizenship in 2011 [Tea Party Senators Target Birthright Citizenship for Immigrant Children, by Devin Dwyers, ABC News, April 6, 2011].

But don’t be fooled. Lee not only wants more immigrants to take jobs from Americans but also doesn’t want to crack down on illegal-alien thugs once they cross the border.

In 2015, he opposed mandatory minimum sentences on illegals, and vowed to vote against anti-sanctuary cities legislation that included such common-sense provisions [Immigration crackdown splits GOP, by Seung Min Kim, Politico, August 11, 2015]. And unsurprisingly, Lee also supports “criminal justice reform,” an idea that would put millions of felons back on American streets.

Trump’s putting Lee on the short might be understandable if he supported the president in 2016.  But beyond Lee’s open-borders activism is this: After Trump secured the GOP nomination in May of 2016, Lee refused to endorse him [Mike Lee on Donald Trump: 'He scares me to death,' by David M. Drucker, Washington Examiner, May 11, 2016]. A month before the election, Lee demanded that Trump step down as the GOP’s nominee [Sen. Mike Lee: Stepping Down is Trump's Only Honorable Path, October 9, 2016].

And then he voted for the open borders neocon, Evan McMullin, also known as Egg McMuffin in some parts. Trump’s misnamed “Muslim ban” was unconstitutional and religiously intolerant, Lee said, and concerned him as a Mormon [Utah Sen. Mike Lee voted for McMullin in protest of Trump, by Dan Harrie, The Salt Lake Tribune, November 9, 2016].

Yet even with that last, his vote on the veto, and his well-established long record of anti-Trump rhetoric and legislative Open-Borders activism, Lee showed up, with his brother, on the short list last year before Trump picked Kavanaugh [Trump spoke to Mike Lee about Supreme Court seat, by Louis Nelson, Politico, July 3, 2018].

And he’s likely still there.

Yet consider Trump’s victories in the court, and what Lee’s elevation in 2018 might have meant—and will mean if he replaces Ginsburg. The court has backed Trump on three major initiatives: the “Muslim ban,” rerouting military spending to the wall, and blocking asylees who hit the U.S. border from a third country. Kavanaugh’s voted for the wall spending; the asylum order—no vote published—was unsigned. Lee might have voted the wrong way on both.

Lee isn’t a total cuck on immigration. But neither is he all that good. He’s a legman for Big Tech’s Open-Borders globocrats. And, as he made very clear, he doesn’t much care for Trump, which does not bode well for success before the court in a second term.

Advice for The Donald: A man who voted for Egg McMuffin is not your friend. Don’t put him on the court.

He’ll stab you in the back.