Fighting Back During A Massacre Works Again

Here's a report on the massacre, and one man who fought back:

As the man fired at City Attorney John Hessel, Hessel tried to fight off the attacker by throwing chairs, McNichols said. The shooter then moved behind the desk where the council sits and fired more shots at council members."We crawled under the chairs and just laid there," McNichols told ABC's "Good Morning America." "We heard Cookie shooting, and then we heard some shouting, and the police, the Kirkwood police had heard what was going on, and they ran in, and they shot him."[The Associated Press: Gunman's Note: 'The Truth Will Come Out', By CHRISTOPHER LEONARD, February 8, 2008]

While it says Hesssel "tried" to fight back, it should say that he "fought back," even if he didn't succeed in killing or disarming the gunman, who was shot by police. They've released the list of victims, and guess what? Hessel's name isn't on it.

The victims whose photographs I've seen seem to be all white.

UPDATE: All white victims, Thornton is the black guy on the bottom right. 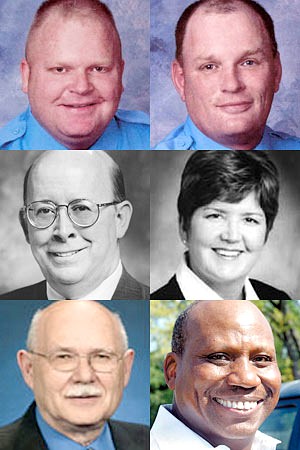