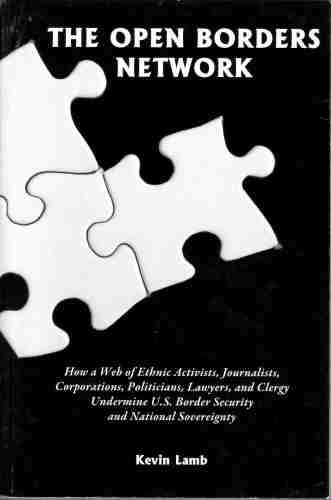 Kevin Lamb has produced a guidebook to the enemies of patriotic immigration reform that is at once handy and comprehensive—The Open-Borders Network. How a Web of Ethnic Activists, Journalists, Corporations, Politicians, Lawyers, and Clergy Undermine U.S. Border Security and National Sovereignty.

You can read the whole thing for free here [PDF]. A hardcopy version is available for just $3.50 from the American Immigration Control Foundation here.

The "usual suspects" are all here: SPLC ("$PLC" as VDARE.COM calls it), ACLU, LULAC, MALDEF, La Raza and MEChA.

But Lamb has found plenty of organizations that do not even turn up in a search of the VDARE.COM archives—such as The Hispanic Federation, The National Day Laborer Organizing Network, The National Immigrant Solidarity Network, DeleteTheBorder.org, Christians for Comprehensive Immigration Reform and The National Alliance of Latin American and Caribbean Communities.

Perhaps we could designate them "hate-America groups", plot them all on a "Treason Map" of the fifty States, and update the list every year for the convenience of journalists and commentators.

Confronted with an embarrassment of riches, I will highlight just chapter five, Lamb's reporting on religious groups.

Americans are wont to go easy on purported men of God, even when they are doing the Devil's work. Nearly all of the organizations that Lamb discusses misinterpret the biblical injunction to "love the stranger who sojourns among you" as a divine command to vote for mass immigration and amnesty. In fact, the scripture is referring   to travelers passing through a foreign land—not immigrants demanding affirmative action and displacing the natives.

One of the most radical voices on the Christian left is actually called  "Sojourners"—a ministry founded as a commune in Washington DC (1975). They publish an illustrated monthly also named Sojourners.

The organization declares: "We believe that gospel faith transforms our economics, gives us the power to share our bread and resources, welcomes all to the table of God's provision, and provides a vision for social revolution."

This calls for some reflection. Traditionally, "faith" has been understood as the Christian's proper stance toward things which "surpass human understanding". The believer is not expected to use "faith" to balance his checkbook or draw up a budget. Still less would it be applied to international economic and demographic problems.

Sojourners' advocacy of an "economics transformed by faith" amounts to relying on a repetition of the miracle of the loaves and fishes on a world scale.

Sojourners further declares: "We refuse to accept structures and assumptions that normalize poverty and segregate the world by class".

Really? Such "structures" include prosperous countries' barriers to entry. Such "assumptions" include the superior intelligence, thrift and foresight of some groups as compared to others.

Sojourners' founder Jim Wallis calls the U.S. "the great seducer, the great captor and destroyer of human life, the great master of humanity in its totalitarian claims and designs". In past years, his organization has rallied to "liberation theology" and supported communist regimes in Vietnam and Nicaragua.

Today they fight America from within by promoting continued immigration. The organization took the lead in founding Christians for Comprehensive Immigration Reform, a pro-amnesty coalition.

Openly leftist Churches and denominations are not alone in promoting demographic transformation. The ostensibly "conservative" Lutheran Church-Missouri Synod (LCMS)—has resolved that Christ's Great Commission ("Go therefore and make disciples of all nations...") requires us to petition federal and state government for the funding of refugee, immigrant and asylee programs.

"It is the will of the Lord", proclaimed the 1995 LCMS convention, "that His people reach out to the immigrants that He has placed in their midst [my emphasis—R.D] and seek ways to serve them."

It is instructive to contrast the words of American Christian organizations with those of the National Hispanic Christian Leadership Conference (NHCLC).

American Christians see themselves as Good Samaritans, humbly carrying out the gospel's injunctions to love their neighbors. But the NHCLC speaks of "political empowerment" and "social transformation".

Does anyone seriously imagine that once Hispanics (or more accurately their self-appointed leaders) have gained power and transformed American society, they will suddenly turn around and start playing Good Samaritan to us?

Nevertheless, the NHCLC blames ordinary Americans, not itself, for "the current polarization of our society". They published an  open letter to President Bush in 2006 calling upon him to resolve our social tensions with a general amnesty—while complaining about discrimination, profiling, hostility and so forth.

It's a daunting coalition. But reading Kevin Lamb's account of the bewildering variety of organizations promoting demographic suicide for the historic American nation, I was struck by the extent to which the Treason Lobby cause has now become just an industry.

We tend to think of our opponents as ideological zealots. But fanaticism is only part of the story.

For every hate-America ideologue like Jim Wallis, there are fifty people—church, foundation, and  government bureaucrats—being employed to deal with the problems created by immigration.

However, they have already lost the immigration argument. And no cause can triumph on institutional inertia alone.