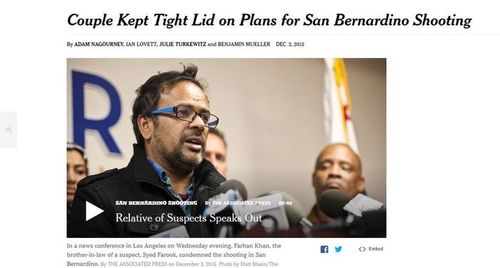 National Immigration Safety and Quality Board vs. the Farook Family

An idée fixe of mine is that there should be an independent National Immigration Safety and Quality Board to investigate spectacularly screwed-ups results of the immigration process and issue advisories on how the system can be reformed to let in only better quality people. There are 7 billion foreigners in the world, hundreds of millions of whom would like to move to America, so there’s no good reason why America should have policies that let in so many crummy people like the Farook Family.

And yet, from the New York Times on the Farook Family:

But in their last moments, with the police in pursuit of the rented sport utility vehicle Mr. Farook was driving, Ms. Malik aimed and fired a rifle out the back of the car. Before the couple were killed, the authorities said, they unloaded 76 rounds at the police and injured two officers.

Mr. Farook and Ms. Malik met on a dating website, according to Mr. Farook’s brother-in-law, Farhan Khan, who is married to one of Mr. Farook’s two sisters.

Ms. Malik, 27, was born in Pakistan and had lived with her family in Saudi Arabia, Mr. Khan said. Mr. Farook, 28, was born in Illinois, and his parents are from Pakistan. The couple had been married for two years. An online baby registry in Ms. Malik’s name said her daughter was due May 17 of this year and listed diapers, baby wash, a car seat and safety swabs.

Keep in mind that the late Ms. Farook had a six month old baby while she was blasting away at the cops like Machine Gun Kelly.

Mr. Khan said that Mr. Farook had traveled to Saudi Arabia at least two times: first to meet Ms. Malik’s family and then to marry her.

A congressional official briefed on the inquiry said the authorities believed Mr. Farook had also gone to Saudi Arabia for the hajj, the annual Islamic pilgrimage, though it was not clear exactly when. …

In July 2015, she was granted a conditional green card, for which, as a matter of procedure, the couple had to prove that their marriage was legitimate. Additionally, Ms. Malik had to pass criminal and national security background checks.

After Mr. Farook graduated from California State University, San Bernardino in 2010, officials said, he worked for five years as an environmental inspector for the San Bernardino County Public Health Department.

On Wednesday, Mr. Farook joined colleagues at an annual holiday party, the same party he had attended the year before. He did not appear out of place.

Soon, however, he stormed out in anger. The nature of the dispute was not clear, but when he returned with his wife, both of them were dressed in tactical gear and carrying assault rifles, officials said.

They had made pipe bombs, presumably beforehand, so they had been thinking of doing something.

A few years before he married his wife, Mr. Farook had profiles on at least two dating websites, where he advertised his family as well-adjusted. “Religios but modern,” he wrote.

He described himself as a health, safety and environmental inspector who came from a Sunni Muslim family of two girls and two boys.

“Enjoy working on vintage and modern cars, read religios books, enjoy eating out sometimes travel and just hang out in back yard,” he wrote, adding that he also enjoyed “doing target practice with younger sister and friends.”

My NISQB would investigate why Mr. Farook’s parents were let into the country:

Mr. Farook’s parents appeared to have a tumultuous and often violent marriage, according to court records. His mother, Rafia Farook, filed for dissolution of the marriage in 2006. Additionally, she accused her husband, also named Syed Farook, of domestic violence. Those complaints were later dismissed.

In 2008, Ms. Farook again accused her husband of domestic violence and legally separated from him.

But the trouble apparently continued until as recently as February of this year, when she made another domestic violence complaint. Records indicate that the complaint is still active.

Here in Riverside, about 20 miles from the site of the shooting, the Farook family had lived in a small ranch house since at least the 1990s, neighbors said. The house was full of life, with goats and chickens raised in the backyard.

Victor Venegas, who lives across the street, once owned a small trucking company for which the elder Syed Farook worked as an independent contractor. He owned an 18-wheeler, Mr. Venegas said.

“I would send him all the way to Georgia, and he loved that,” Mr. Venegas said. He said he believed the father had continued to work as a truck driver after Mr. Venegas disbanded the business.

Money may have been a strain in the Farook household. The father would ask Mr. Venegas for money.

“He would sometimes come over without calling and asking, ‘Can I have $10 to buy cigarettes?’ ” Mr. Venegas said.

Another neighbor, Luis Escamilla, 25, went to high school with one of the younger Mr. Farook’s sisters, Eba Farook. He said she had recounted tension between the father and the rest of the family.

“She said they would kick the dad out for a few months, then he would come back,” Mr. Escamilla said. “He didn’t get along with the rest of the family.”

Exactly how did the Farook Family being allowed in American promote “the general welfare,” other than to provide Mr. Venegas with a lower wage occasional truck drivers, savings he partly lost in all the cigarette money that got bummed off him?