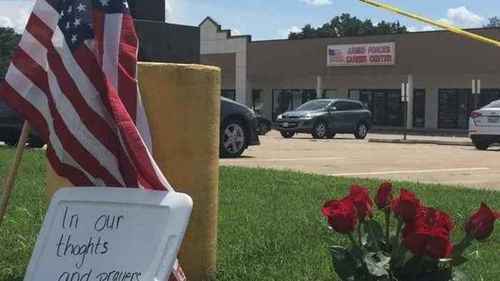 See also Michelle Malkin's No, Obama, The Tennessee Jihad on U.S. Troops Is Not a “Circumstance”

The first thing I wanted to know when I saw the Washington Post report of a gunman shooting US Marines in Tennessee was “What color gunman?” Of course, the story didn’t say, although it’s been updated with the gunman’s name (Muhammad Youssef Abdulazeez from Kuwait). I think that when MSM reporters are in press conferences, and the spokesman says “We can’t release the name of the gunman just yet”, the reporters should be shouting that question: “What color gunman? “

Because I promise you, people at home are shouting it at their TVs.

Anyhow, the killer turns out to have been a Muslim immigrant— apparently assimilated right up to the time he committed Immigrant Mass Murder.

(That would be the “young Trayvon” picture if he’d tried and failed to kill a cop or an armed citizen.)

Here he is with his somewhat less assimilated family in Chattanooga along with a helpful suggestion from the great Ann Coulter:

Another witness said he saw the shooter drive away at high speed after the shooting there.

"One of the guys, he got shot in his leg," Elbardissy said. "[The victim] was trying to join the Navy."

I suppose Mr. Elbardissy is harmless restaurateur. But the reason Chattanooga, TN, just had a jihadist mass murder is because of the post-1965 mass immigration of Muslims, which is why a random businessman in Chattanooga—the first guy they interview—is also a Muslim.

Secretary of the Navy Ray Mabus released a statement:

While we expect our Sailors and Marines to go into harm's way, and they do so without hesitation, an attack at home, in our community, is insidious and unfathomable. As the investigation unfolds, our priority will be to take care of the families of those affected.

I'd like to express my gratitude to the first responders on the scene whose prompt reaction was critical to stopping this individual from inflicting further violence.

Though we can never fully prevent attacks like this, we will continue to investigate, review and guard against future vulnerabilities and do everything in our power to safeguard the security of our service members and their families.

I guess that’s a little better than the infamous statement Army Chief of Staff George Casey made after the Fort Hood massacre by still-unexecuted jihadist Muslim Nidal Hasan: “It would be a shame — as great a tragedy as this was — it would be a shame if our diversity became a casualty as well” [Army Chief Concerned for Muslim Troops, By Joseph Berger, New York Times, November 8, 2009]. The Secretary of the Navy may have profited by Casey’s example.

But there’s nothing “unfathomable” about this attack. There have previous attacks on recruiting centers, including a 2009 double murder in Arkansas by another Muslim named Abdulhakim Muhammad. (Not an immigrant, by the way—an American black, born Carlos Bledsoe).

I covered this at some length in Diversity Is Strength! It’s Also…Unarmed American Soldiers Dying In Afghan “Green On Blue” Shootings. I made the point that Armed Forces also have to behave this way in Iraq and Afghanistan. That is, even in a combat zone, you’re supposed to be unarmed except when you’re actually “outside the wire.”

The problem: the Armed Forces frequently have locals inside “the wire” with them—and “the wire” is not impenetrable either. See Michelle Malkin’s What About the Camp Bastion Attack?

So the Department of the Navy doesn’t need to do anything to safeguard the Marines, it needs to stop deliberately disarming them.

Marines don’t need to be told to carry weapons—they only don’t carry weapons because they’ve been ordered to.

The Marine Corps should not be in the positions of having to thank “first responders”—they should be permitted to respond themselves.

At the time of the Fort Hood Immigrant Mass Murder, William Saletan [Email him] of Slate used the fact that one of the civilian police officers who responded to the Nidal Hassan attack was a woman to push for more women in combat. [Girls in the Hood | If women can defend Fort Hood, they can defend America. By William Saletan, November 6, 2009]

I responded that this was stupid—the reason that none of the servicemen present on the scene shot Major Hasan was because none of them had a gun. The Army has a mania for keeping loaded guns away from soldiers, which it not only exercises at Fort Hood and Fort Dix (site of an earlier plotted attack) but in Iraq, Afghanistan and on the Mexican Border.

And it turns out that the woman police officer’s role in taking down Hassan was exaggerated. Hassan shot her and kicked her gun out her hand when a male sergeant, a black veteran, came around the corner and shot him [Fort Hood witness says he feared there were more gunmen, By Charley Keyes, CNN, October 20, 2010]

So what’s the lesson regarding immigration? Well, it’s partly the same thing—the Armed Forces could defend themselves if they were, in fact, armed. America’s political leadership just needs to stop disarming them. And we already have laws that protect the United States from illegal immigrants—they’re just not being enforced.

Also, we could have laws against legal immigrants who are likely to go bad—for a start, we could end Muslim immigration (including “refugees”). Or (keep it simple, stupid) we could have an immigration moratorium, as Ann Coulter (and VDARE.com, repeatedly) have both urged.

Note also the MSM is “ordered”—it’s actually SJW custom, although to a certain extent in the stylebooks, not to call an Immigrant Mass Murderer an immigrant, and to always whinge about “backlash” when a Muslim kills a group of non-Muslims.

Perhaps if the MSM treated an Immigrant Mass Murderer the way it treats the very rare racially motivated white shooter—saying what race he is, condemning his ideology, attacking everyone and everything that can be remotely associated with him etc. etc.—it might actually stop some of these murders. Instead, they go straight down the Orwellian Memory Hole.

But, although the MSM refuses to acknowledge it, Muhammad Youssef Abdulazeez is simply the latest proof that Immigrant Mass Murder Syndrome is real. We don’t know why it happens—probably, as Brenda Walker has argued, more attention should be paid to the inherent psychological strains of transcultural immigration. But the fact cannot be denied.

Later, I updated it with Immigrant Mass Murder Table, 411 Killings, 153 Wounded. (Click on the printable view.)

I’m updating our list again now, but just this year we’ve had the following cases:

In a column about gun politics in Colorado after the Newtown massacre, I asked this question: “Why Can Gun Grabbers Have A “Moral Panic” After An Immigrant Mass Murder, But Immigration Patriots Can’t?”

Maybe, thanks to Donald Trump, now is the time.