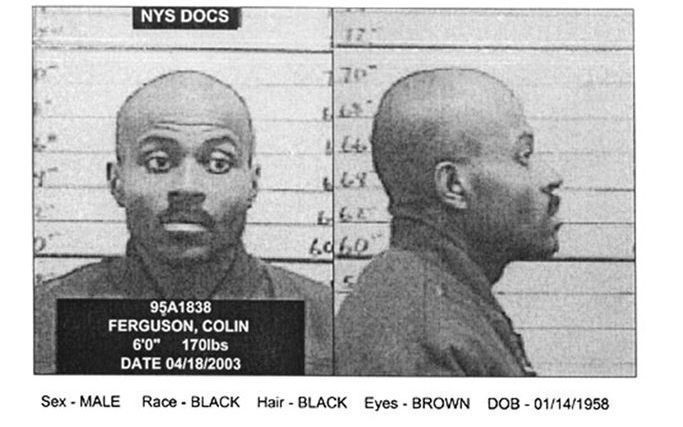 Derb Remembers Colin Ferguson: "If It Was A White Guy, They Would Have Told Us"

In Chapter 6 of We Are Doomed I wrote the following thing about the reporting of crimes.

You would be spared the trouble of all those look-ups if news outlets reported demographic factors in criminal events.  Of course, they very rarely do, believing these things best left unsaid.  The assumption is, that if not told these things, the great slack-jawed, dimwitted, unwashed mass of Americans will make no assumptions of their own.  Yet in fact every American can decode the subtext of reports like: "The robber was described as a tall man in his thirties."  Reporters should get out more.  I came home from work on the Long Island Railroad one day in December, 1993.  My train was right behind the one in which Colin Ferguson went berserk and shot 25 people [6 died].  We were held up for a long time, and there were no cell phones.

My poor wife was at home, watching news of the shooting on TV.  For all she knew, I might have been among the dead.  Kind neighbors came round to keep her company.  Telling me about it afterwards, she remarked: "They kept saying the same thing: 'It must be a black guy.  If it was a white guy, they would have told us ...'" (Emphasis added)

I find myself wondering whether ordinary Americans are as savvy about these things today as my neighbors were in 1993.

For one thing, having been a close observer of the Cold War and having actually lived in a Communist country, I have a core belief that propaganda works.  If all the main organs of respectable opinion go on saying for decades that two plus two equals five, eventually you'll have a good majority of people believing it.

For another thing, among my kind neighbors of 1993 were several in their seventies and eighties, all since passed away. These older folk were raised in a nation with a better grasp on reality than we have today ...  for more on which, see my current column in Taki's Magazine.