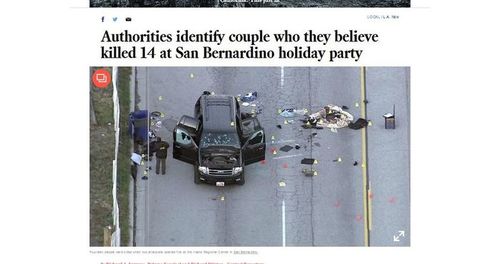 It's amazing how fast we find out the citizenship status of a minority mass murderer when he's technically an American—apparently Syed Rizwan Farook was born in the US, about 1987, some 22 years after Teddy Kennedy's 1965 Immigration Act:

Late Wednesday night, San Bernardino police Chief Jarrod Burguan identified the people killed in the gun battle with police as Syed Rizwan Farook, a 28-year-old American citizen, and 27-year-old Tashfeen Malik. Police did not know where Malik was born or where she had lived.

That was easy! Compare that with the tedious detective work I have to do to find out whether a Hispanic killer is a native-born or immigrant killer. When an immigrant is the killer, the MSM finds euphemisms for immigrant, like "native of", or "came to America" from, but when the killer has an American passport—thanks, Teddy Kennedy!—they come right out with it.