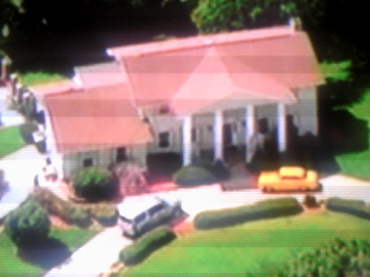 Steyn And Hewitt On "The Enemy Within"

Check this out on Chirbit

Mark Steyn discussed the Chattanooga attack with Hugh Hewitt [Full transcript | Audio] Above is a picture of the killer's family home—you can see he wasn't living in desperate poverty in the Gaza Strip, or wherever, he was fully embedded in America.

Here's the version posted at SteynOnline.com.

On Thursday my weekly date on The Hugh Hewitt Show fell just a couple of hours after the murder of four US Marines by yet another member of the Amalgamated Union of Lone Wolves. It was a victory for the jihad, no question about it. One should be especially careful about what one says in the immediate aftermath of mass murder, but Hugh asked me and here's what I said:

HUGH HEWITT: Mark, this seems to be what everyone has been warning about for the past six weeks or so as Ramadan comes to an end, Abdulazeez arrives on the scene to kill four Marines.

MARK STEYN: Yes, these stories are all different, and in a certain sense, they're all the same. You said it was two "military installations", which makes them sound more secure than they are. This was in fact a recruiting center, which means it was a storefront in a shopping mall. It was next to a pizza joint, and it had a little sticker on the door saying in effect that this is a gun-free zone. So in fact, these storefronts, which are all over America (I passed one earlier this morning in a town in Northeastern Vermont), are incredibly vulnerable to attacks like this... Whether or not it's actually directed by ISIS or anybody, I mean, most of these "lone wolves" turn out to be, as I've said before on your show, "known wolves" - in that they've been on the radar of certain people, certain authorities at some point.

As I said, all the stories are different, but they're all the same. In the case of the Pantybomber, his father fingered him to the CIA - who then did nothing with the information. In the case of this man - Muhammad Youssef Abdulazeez - it was (according to The New York Times) his father, an employee of the Chattanooga Public Works Department, who had come under scrutiny by the vast federal terrorism apparatus, who eventually let their investigation lapse. Other than that intergenerational wrinkle, the perpetrator (about whom not much was known when Hugh and I spoke) was a familiar figure: a young man with a university degree in engineering, living in a nice middle-class columned residence in a nice middle-class neighborhood.[More]

And yes, apparently the FBI was looking into this "lone wolf/known wolf", to use Steyn's formulation. Here's a suggestion from Ann Coulter:

Instead of paying the FBI to follow certain immigrants for years, how about not admitting them in the first place? https://t.co/tgmZPnIS63