A gun battle at a restaurant in the West Adams district left three people dead and 12 others wounded early Saturday, prompting a massive police dragnet for suspects.

There were about 50 people inside the restaurant in the 2900 block of Rimpau Boulevard when an argument broke out, Preciado said.

Three men left the restaurant and returned with firearms and began shooting at another group. Others at the restaurant also opened fire, and some diners were caught in the crossfire, Preciado said.

The shooting continued in the driveway of the restaurant, which is located in a converted house.

“When we got there. there were three people dead and people running everywhere,” Preciado said. “We had multiple people with gunshot wounds.”[More]

Ah, but what kind of men were shooting, and what kind were shot?

There's a hint, no more, in this paragraph:

The restaurant, a popular Jamaican eatery with a wide following, has a DJ on Friday night and some customers play dominoes. Police said the owner was cooperating with detectives.

A motive for the shooting remained unclear.

About 50 LAPD officers and a similar number of firefighters were on the scene just after the shooting.

People who live on the tree-lined residential street said they were stunned by the violence. "I went to go hide next door by the trash can. When I come out, I hear plenty of people get shot," one told KTLA-TV.

The restaurant appears to have been un-permitted but had a loyal underground following. There are several reviews on the Internet.

“There’s no menu, just whatever he’s cooking that day which is usually at least 7 different things. He only does jerk chicken on Fridays or if he makes extra from when he does catering,” one reviewer wrote.

The shooting occurred in a year of rising crime in Los Angeles.

The commenters are saying things like "Does this restaurant have a name?" and "Why don't they say the suspects are African-American."

A place like that has no restaurant license, no liquor license, no health inspection, no fire inspection, and no liability insurance, and is apparently operated by immigrant entrepreneurs. Reason Magazine would be delighted, although I don't know if their mostly white staffers would be welcome. (Of course, it's also not bothered by the LA County Human Rights Commission—not sure how the Reason staffers feel about that.)

The review the LA Times is  quoting—but not linking to—is from a Tumblr called  HoodChef  March 14, 2011.

I had trouble finding it by searching, because the Times cleaned up his spelling. I've  paragraphed the quoted text below, and added some emphasis: 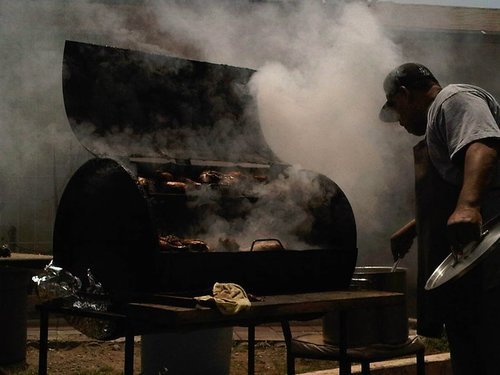 So my buddy Big Ray kept telling me about this spot called Dilly’s that served Jamaican food.I was like ok you have sum kool spots let’s hit it up.Ray was like,“ i want you know it’s a house not a restaurant. I was like ooh shit this should be good.

As i arrived at this house in west LA it looked like something outta Belly or Shottas. [Hood movies with violence.] Men in the yard smoking herb and drinking, he had 2 smokers going on by the front door and the walk way was built into the garage area which leads to a extended restaurant style additional kitchen. Dilly himself wasnt much for words at first because he lets his food do the talking. 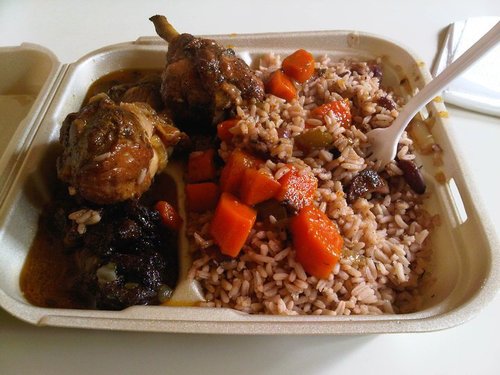 I’ve had Jamaican food before since one of my best friends is Jamaican and i’ve eatn it here and there when i had a chance. But Dilly’s food got my attention. You can get a beer while you wait to be served and service here is fast since they are always cooking.

My personal favorites are the jerk chicken and chicken foot soup. But other good items he serves are stuffed fish,oxtail,stew chicken,goat curry etc. His drink selection is awesome from Red Stripes to Irish Moss shake to wash down this great food.Dilly is actually a big fan of burrito’s lol so i often stop by El Picante in Bell Gardens and get him one.Dilly and i have became good friends and often gives me different food to try out like his beef patties which are the truth!

There’s no menu just whatever he’s cooking that day which is usually atleast 7 different things. He only does jerk chicken on fridays or if he makes extra from when he does catering which he also does for events or even small parties. His time of operation is when the foods gone which means if u call late and if he answers the phone. I’ve been there as late as 1am so u never know. So if your looking for sum good home cooked jamaican food hit up Dilly’s in west LA off of La Brea and Adams.

So, to sum up, there's an illegal restaurant in a Los Angeles "hood" where men stand around smoking "herb" and drinking Jamaican Red Stripe beer. No doubt the food is excellent, but really, it was just a matter of time before the kind of argument broke out where three guys leave the restaurant and come back with firearms.

It's our uptight refusal to go to such places that causes white people to get shot so much less than blacks.

And this could also be another case of Immigrant Mass Murder Syndrome. The LA Times isn't telling us that either, but maybe the commenters will.