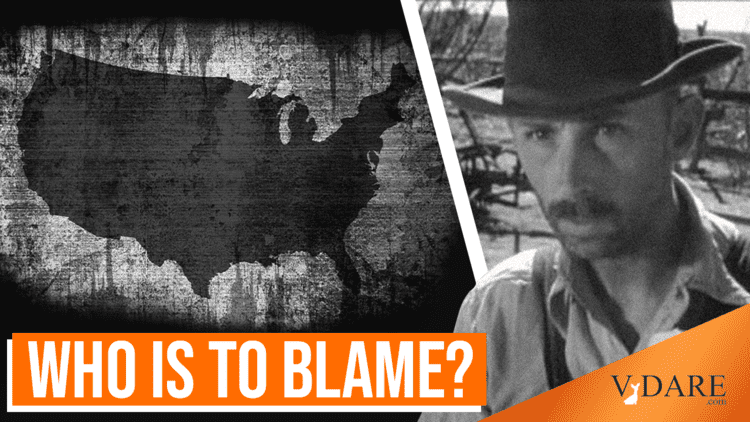 The Old America Is Dead. Where Do We Go From Here?

“Then who do we shoot?”   Like Muley Graves the sharecropper, John Steinbeck’s evocative Okie everyman in John Ford’s 1940 film, many Americans are bewildered by a tidal wave of forces that seem beyond their control. The answer is not easy. But increasingly it seems likely to involve geographical partition.

Facing eviction from his dust-bowl farm, Muley confronts a man on a bulldozer who has come to demolish the shack Muley and his family live in. The sharecropper is determined not to give in and threatens the bulldozer operator with a shotgun—only to discover he is a local man, one of Muley’s own people. The bulldozer driver explains it’s not his fault, it’s just a job that he was hired to do. If Muley shoots him, then someone else will come to do the job and Muley will land in jail.

“Then who do we shoot?” asks Muley. The banker? The people back East who own the bank? Morally disarmed and demoralized, Muley can only watch as the bulldozer man destroys his home.

Patriotic Americans understand Muley. Our people, our culture, our history, everything we hold dear, is under relentless attack by the Main Stream Media, politicians, “activists,” and kritarchs in the courts, aided and abetted by enemies within, often our own kith and kin, who have internalized the blood-libel Leftist narrative of an irredeemably “racist” America that must be razed to the ground.

“If you know your enemy,” wrote Sun Tzu, “and know yourself, you need not fear the result of a hundred battles.” Our enemy, in this case is the globalist Blob and its militant would-be Che Guevaras and LARPing Leninists, the MSM, the bureaucracy, the courts, the big corporations, and the education establishment.

Yet, for the most part, until recently, the Blob has not confronted the Historic American Nation head-on. The Blob has been patient, killing us by the death of a thousand cuts, taking ground steadily through subversion, using propaganda and misinformation, censorship via Tech Totalitarians, and the slow encroachment of what the late Sam Francis called “anarcho-tyranny,” with mass immigration (“the Great Replacement”) as its weapon of mass destruction.

The Blob is amorphous, a slippery, slimy thing that probes and gropes its way into whatever social-economic-political cracks it can exploit, eventually engulfing its prey like quicksand.

It is also using “hybrid warfare” tactics that have been used before but have gelled with the expansion of mass communications and can quickly conjure up “flash mobs” and distribute “fake news" [Explainer: what is ‘hybrid warfare’ and what is meant by the ‘grey zone’?, The Conversation, June 17, 2019]. The scare quote, creative editing, and constant repetition of bald-faced lies, magnified by social media, engulf us in a tidal wave of words and images. We live in a bizarre Twilight Zone that lacks depth and context.

Give credit where credit is due. Hybrid warfare has worked. The Blob infiltrated and subverted American institutions by exploiting our American sense of Fair Play and decency that made whites a relatively easy mark. As the Blob seeped into our lives, we gradually adjusted to a “new normal” each and every day.

Then Donald Trump was elected president. The Blob was shocked. Orange Man Bad seemed to threaten its plans to finish off the Historic American Nation. And so, ever since November 8, 2016, the MSM have kept the country in hysterics with one manufactured crisis after another. Fake news via a social media, a hybrid warfare tactic, kicked into high gear: Russiagate, Ukrainegate, the Chinese Virus panic and ensuing lockdown and economic crash, and now the myth of St. George Floyd and blacks being “hunted” by whites that catalyzed the mobs that have looted and burned American cities.

Using the Chinese Virus and Floyd riots as cover, the Blob and its militant wing—Antifa and Black Lives Matter—ratcheted up anarcho-tyranny to new heights.

In some American cities, Muley’s question—who do we shoot—has an answer, at least in an immediate sense.

So what next? Where do we go from here?

That scenario is most likely a fantasy.

Even if Trump is re-elected, his past record of bluster and little to no action speaks for itself. The Blob and its executive arm, the Deep State, have boxed him in. Trump and his “team,” if one can call it that, are as easily disarmed by the antiracists as Conservative, Inc.’s operatives. Their immediate and reflexive condemnation of the police after Floyd’s death, like the Beltway Right’s compulsion to apologize for even existing, tells the tale.

Of course vote for Trump in November. But don’t expect too much. Trump has been, at best, a speedbump, not a roadblock, in the Blob’s path.

America has survived unrest before, but that was a different country. It had a white, Christian super-majority and a shared history. It had at least a theoretical chance of working out a modus vivendi with its black minority. The language was English and, most of the time, we played by a set of rules to which everyone—liberal conservative, Democrat or Republican—agreed. Elections were not winner-take-all apocalyptic events. Nominations to the U.S. Supreme Court did not occasion brutal, partisan, ideological war. No longer.

If we bank solely on electoral politics, we will lose, especially as the demographic ring closes. The winners will show no quarter.

Political life as we knew it in America is over. Again, the America we grew up in and loved is dead. Elections are a holding action at best. It seems highly unlikely that Trump (or anyone else, for that matter) can, for instance, deport and encourage to self-deport tens of millions of illegal aliens, even assuming a desire to do so.

What’s more, a substantial portion of the dwindling white majority has disavowed its identity—the “flight from white,” as Steve Sailer calls it. Meanwhile, the Blob controls the Deep State and its bureaucracy not only on the federal level but also in too many swing states and major metropolitan areas.

Even that might not ensure order in a chaotic post-America, and the diminishing number of whites will surely not enjoy the protection of the state. At some point, white Americans might well be living like white South Africans, ever in fear for their lives.

If order breaks down, vigilante groups, even criminal gangs, will step into the void, as vigilantes have done in Mexico and Hispanic gangs have done to protect their neighborhoods during the Floyd riots.

The good news: White men have followed suit when mobs threatened their homes and history. The boys in Fishtown in metropolitan Philadelphia who protected a police station, the heroes who surrounded and protected a statue of Christopher Columbus, and a group of armed Texans who gathered to protect the Alamo, are just three examples.

Meanwhile, following the “higher number than usual” of Atlanta police officers calling in sick when one of their own was charged with felony murder in the shooting of Rayshard Brooks, Seth Cohen at Forbes wondered whether the “Blue flu” would be “America’s next pandemic" [As Atlanta Police Protest, Is “Blue Flu” The Next Pandemic?, June 18, 2020]. As calls to “defund the police” mount, that’s a good question.

And it raises another: What happens if America’s truckers decide not to deliver to cities with no police protection?

So far, resistance to the Blob is scattered and uncoordinated, but that could change as the American systemic crisis deepens.

States, counties, and cities that sided with or surrendered to the mob, and the Blob’s intensification of anarcho-tyranny during the recent coronavirus lock down, seem to have sparked a sharp reaction from the American remnant that could provide the bare bones of a Middle American defense movement.

Someday, “blue” and “red” enclaves, even whole states, might evolve into new polities.

American patriots are developing their own hybrid warfare with media of their own, effectively following the Left’s example of nullification and internal secession, as well as organizing an alternative cultural network that publishes its own books, educates its children, and tries to carry on despite the threat of Deep State suppression.

My guess for the future: combination of scenarios two and three. The managerial state tightens its grip, the result on November 3 regardless, but devolution continues. 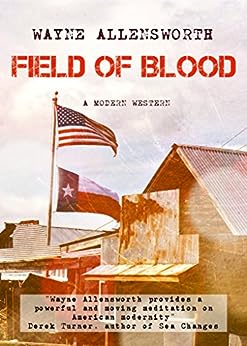 The Blob won’t let up. The riots we recently witnessed will continue even if Trump sends in the troops now.

When that happens, we won’t need to ask Muley’s question.

Wayne Allensworth is a Corresponding Editor of Chronicles magazine. He is the author of The Russian Question: Nationalism, Modernization, and Post-Communist Russia, and a novel Field of Blood.  He will soon be writing at American Remnant (www.american-remnant.com).  The website is currently under construction.

Post
Why Do Liberals Ideologically Cocoon Themselves More Than Do Conservatives?
MORE...
POPULAR TAGS