Whitopia? It Used To Be Called America

Occasionally, political scientists build a large thesis based on one interesting statistic. In his 2008 book The Big Sort

, Bill Bishop came up with the idea of a "landslide county" where Republicans or Democrats won by over 20%. Bishop found that the number of these counties nearly doubled from 26% of the electorate in 1976 to 48% in 2004. He convincingly demonstrated t 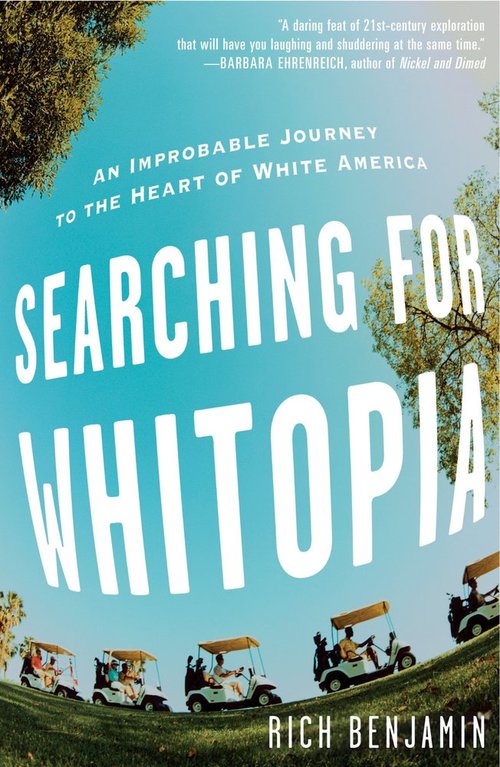 hat this was proof of Americans' increased self-segregation on racial, political, and cultural lines.

Richard Benjamin, [Email him]an African American fellow at the think tank Demos, attempts to find such a knockout statistic in his book Searching For Whitopia: An Improbable Journal To The Heart of White America

. Instead of landslide counties, he documents "Whitopias" that supposedly indicate, well, increased self-segregation on racial, political, and cultural lines for America.

According to Benjamin, a

"Whitopia is whiter than the nation, its respective region, and its state. It has posted at least 6 percent population growth since 2000. The majority of that growth, often upward of 90 percent) is from white migrants. And a whitopia has a je ne sais quoi—an ineffable social charisma, a pleasant look and feel."

Well, not exactly. The appendix with a list of hundreds of "Whitopian Counties" defines them as being "at least 85% non Hispanic White, with total population growth of at least 7 percent after 2000, and with more than two thirds of that growth coming from non-Hispanic whites."

This definition contradicts the first one. While all these Whitopias are whiter than America as a whole, many are not whiter than their state. Idaho is 95% white, yet all but one of the ten Whitopias in the state were less than 95% white.

And nowhere does Benjamin establish that these counties' growth is actually caused by white migration—simply that their growth is 66% white. While this number is significantly higher than the 18% white share of nation wide population growth, it is still significantly lower than the actual population of these Whitopias, so it could be caused by natural increase. In fact, only one of Benjamin's 100 "extreme" Whitopias' white share of the population growth is greater than the white share of the existing population. In other words, despite his claim that Whitopias are getting whiter, almost every single one is becoming less white—just not as quickly as the rest of the country.

Finally, the baselines of 85% white population and seven percent growth over the last six year is nothing to write home about. The entire country experienced six percent growth over those the last six years. While immigrants are flooding into the suburbs, the non-white population is still heavily concentrated in urban areas, making the rest of the country much more than 66% white.

Of course, the entire country was over 85% white before the 1965 Immigration act. Combined with the high birthrates after World War II, the whole of America probably qualified as a Whitopia.

Benjamin's statistics merely establish is that there are some counties in America that are not yet flooded with Third World immigrants that managed to grow without the installation of low income housing.

I have no doubt that white flight exists, although it is complicated because whites tend create conditions that cause them to be followed by minorities. Benjamin just hasn't thought carefully enough about it.

Searching for Whitopia, however, is not based solely on statistics. Benjamin tries to weave them into a left-wing cultural travelogue. While his statistics are important, we do not need any numbers to know that white flight is not confined from the cities to the suburbs, but now to exurbs and even formally rural areas. Benjamin braves areas such as St. George, Utah; Forsyth, Georgia; and Warren County, New Jersey to see just what makes White Americans tick.

In this respect, the book is an inferior knock-off of the 1998 bestseller Confederates in the Attic,

in which Tony Horwitz  [Email him]left Bethesda, MD to travel across swaths of the unreconstructed South exposing the backwardness and bigotry of its residents to his cosmopolitan readers. Like Horwitz, Benjamin hails from suburban Maryland and dares to explore to Red America and its inhabitants. Also like Horowitz, he shows a feigned and patronizing sympathy for his subjects, always tempered by the fact that (of course) their existence and worldview is wrong and intolerant.

Though I strongly disagreed with Horwitz's message, Confederates in the Attic kept my attention. This is probably because neo-Confederates (or whatever you want to call them) are much more interesting characters than ordinary Americans who simply want to live in an area with nice schools, safe neighborhoods, and English-speakers. When going native, Horwitz joined a group of hardcore Confederate re-enactors who would go as far starving themselves to emaciation before battles. Benjamin just learned to play golf.

As Benjamin notes, America is rapidly approaching what he calls the "White Peoples' Deadline" of 2042 when whites will become a minority. Immigration into the suburbs is one of the major causes of white flight to the exurbs.

In his chapter "The Latino Time Bomb", Benjamin recounts an extensive conversation with Roy Beck of Numbers USA. Before reading it, I correctly predicted the exchange. Beck, of course, bent over backward to explain that NumbersUSA's opposition to immigration has nothing to do with race. Benjamin responds by linking Beck to John Tanton, whom he smears for publishing Camp of the Saints

and Sam Francis. He also accuses Beck of having "the worst germ fixation I have ever seen" simply because Beck—who had a cold—did not want to shake Benjamin's hand.

Curiously, Benjamin did not interview American Renaissance's Jared Taylor, who (whatever else Benjamin no doubt thinks about him) has thought long and hard about the implications of white flight and would certainly have given Benjamin more of a fight. (Maybe that was the problem.) VDARE.com has a barely traceable presence in Whitopia— Benjamin quotes a very prescient 2004 Sam Francis column that predicted that Barack Obama may represent the "moment when America ceases to be a nation defined and characterized by the white racial identity of its founders and historic population and is transformed into the non-white multiracial empire symbolized and led by 'people like Obama.'" And he lists Peter Brimelow's book Alien Nation as one of "spate of panicky best sellers" in the last ten years. (It was actually published in 1995).

Most amusingly, the dust jacket describes Whitopias as a place full of people who do "not mind a little ethnic food or a few mariachi dancers—as long as these trends do not overwhelm a white dominant culture." Besides inserting "white" before "dominant culture", this is an unacknowledged verbatim lifting of Marcus Epstein's quip in a VDARE.com column that offended the New York Times' editorial board earlier this year.

If there is one minor insight in Searching for Whitopia, it's that whites don't want to talk or acknowledge the racial basis for their decisions—even as they make huge sacrifices to avoid the benefits of diversity. According to Benjamin,

"Most whites are not drawn to place explicitly because it teems with other white people. Rather, the place's very whiteness implies other perceived qualities. Americans associate a homogenous white neighborhood with higher property values, friendliness, orderliness, hospitality, cleanliness, safety, and comfort. These seemingly race-neutral qualities are subconsciously inseparable from race and class in many whites' minds. Race is often used as a proxy for those neighborhood traits. And, if a neighborhood is known to have those traits, many whites presume—without giving it a thought—that the neighborhood will be majority white."

Of course, these whites presume correctly. As areas become more and more non-white, crime increases, social cooperation goes down, and school quality declines. After detailing his experience of an African American youth robbing him at gunpoint in New York City, Benjamin even reluctantly admits that whites have some justification for these fears.

But given our insane regime of political correctness, whites also have good reason to pretend race has nothing to do with their decisions.

Benjamin concludes by with the obvious question "Where's the harm?" What is wrong with whites choosing to live among their own kind?

He replies that middle class whites are forced to experience cultural isolation, long commutes, and urban sprawl. Low-income whites, who occupied the exurbs prior to the white flight, are sometimes priced out. Low-income minorities lose any contact with the middle class. Benjamin believes that "Stemming disintegration is crucial to the long-term quality of our democracy."

While Benjamin painfully tries to show that this segregation the result of zoning and tax laws, it doesn't take his Stanford PhD to know that it's really due to federal government's housing, education and above all immigration policy. whites —who until the passage of the 1965 Immigration Act would simply have been called "Americans"—are increasingly forced to choose between living in crime-infested neighborhoods with terrible schools or retreating to the suburbs and now to the Whitopias at their own social and economic cost.

But unless whites—Americans— acknowledge that their decisions are in response to our insane immigration policies and fight to change them, they will eventually run out of new Whitopias to run to.

Benjamin concludes his book with this sentence: "I want desperately, come 2042, for our national experiment to work."

But America never signed up for any "national experiment" of making whites a minority through government immigration policy.

The experiment is already failing. And unless we want the country to become even more segregated—and possibly break up—we need to pull the plug.