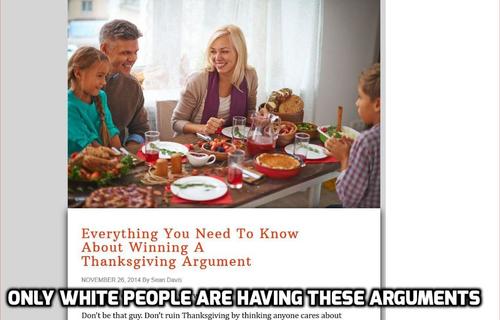 Reminder: The "Thanksgiving Argument" Thing Only Happens In White Homes—Minorities Agree On Politics

The imminence of Thanksgiving, and the fact that politics has gotten much more intense, led someone to link to this 2014 article:

Everything You Need To Know About Winning A Thanksgiving Argument

Don’t start one. That’s how you win.

Don’t be that guy. Don’t ruin Thanksgiving by thinking anyone cares about your stupid political opinions. Don’t con yourself into thinking those stupid talking points you memorized from a site that specializes in Taylor Swift and Kim Kardashian photos will convince anyone with a brain. Don’t pretend that the two years you’ve spent doing nothing at a fancy college make you an expert on anything other than running up massive amounts of student debt for no good reason. [More]

It's true that these arguments are stupid, but the photograph above reminded me of my own 2015 article, The Cold Civil War On Thanksgiving—Thanksgiving Table Arguments About "Racism" Are Only Happening In White Families.

The DNC had set up website called YourRepublicanUncle.com [Archive link] to tell the "woke" youth of America that if their uncle said "I like that Donald Trump! He says what he means", the nephew or niece should say

He certainly does say what he means, and most of the time, it’s xenophobic, or sexist, or out of touch, or totally irresponsible. But what’s really scary is that the rest of the GOP field agrees with him. Because Trump is leading in the polls, the other Republican candidates are competing with each other to see who can echo his message the loudest.

By the way, there's something in that. I mean, yes, the part about "xenophobic, or sexist, or out of touch, or totally irresponsible' blah blah blah is as crazy as usual, but with Trump in the race, Cruz had to at least try to look like he'd control immigration. File that under "Feeling the Heat".

But my main point was this:

Personally, I don't think you're  going to convert anyone with these arguments, but I'll note, again, that the point of this is to divide "Goodwhites" (the young folks) from "Badwhites" (the older folks/Patriots/conservatives) and that blacks, Hispanics, and Muslim immigrants aren't having this argument.

It's all part of what John Derbyshire has called the Cold Civil War.

War On ThanksgivingFeeling The Heat
<< Previous
Next >>
LATEST