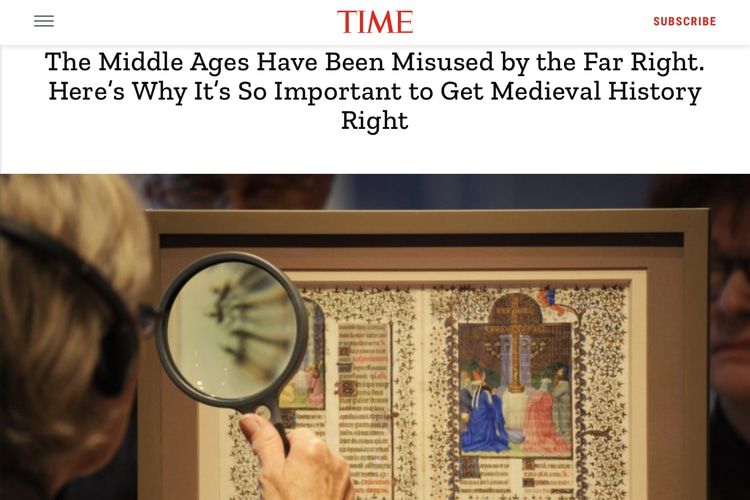 From Time Magazine, which, so far as I know, these days might consist of 7 unpaid interns in Bed-Stuy:

The Middle Ages Have Been Misused by the Far Right. Here’s Why It’s So Important to Get Medieval History Right

The European Middle Ages seem to be having a moment. Although it’s true that, essentially since the time they ended, the period has been used to justify the shape of an author’s contemporary world, the appropriation of the Middle Ages by white supremacists in the last few years has been particularly notable. These white nationalists have used the Middle Ages as the source of their own “Lost Cause,” referencing, for example, the medieval Crusades as a great defensive struggle in which a unified, white Europe defended itself from a hostile, non-white, Islamic invader—even though this understanding is a myth.

So too, they often rely on a narrative of the “Anglo-Saxons” as an English “race,” … But in fact, they perpetuate a 19th century myth that centers on a false idea of what it means to be “native” to Britain. … Following centuries of sporadic use after the Norman Conquest, the term “Anglo-Saxon” reappeared in the late 16th century and eventually, as the past was refashioned, became an ethno-racial identifier.

… Historical sources, especially those that are translated from other languages, aren’t transparent, can’t be picked apart “cafeteria style” for data.

The consequences of researchers looking to the Middle Ages for “data” are already clear.

Likewise, a new article in Science (which has been getting a lot of media coverage) purports to find a correlation between the length of a community’s “exposure” to the “Roman Catholic Church” in the Middle Ages and a decline in cousin marriages.

But as true scholars know, the “Roman Catholic Church” was neither “Roman” nor “Catholic” nor a “Church.”

Wait … nevermind, we were thinking of the Holy Roman Empire.

That, in turn, broke up traditional kinship patterns and led to more individualism, hence more democracy, and ultimately, the triumph of “Western Civilization.” This argument fundamentally misreads both the medieval Church and pre-modern European families, in both cases buying into the myth of the “Dark Ages” as a monolithic thousand years of decline after Rome. In addition, the analysis moves backwards from the present, using the author’s assumptions about the nature of the West (“individualistic” and “democratic”) in order to look for its origins. This way of thinking about an invented idea of “Western Civilization” is not neutral, and it is often put to use as an argument in support of white supremacy.