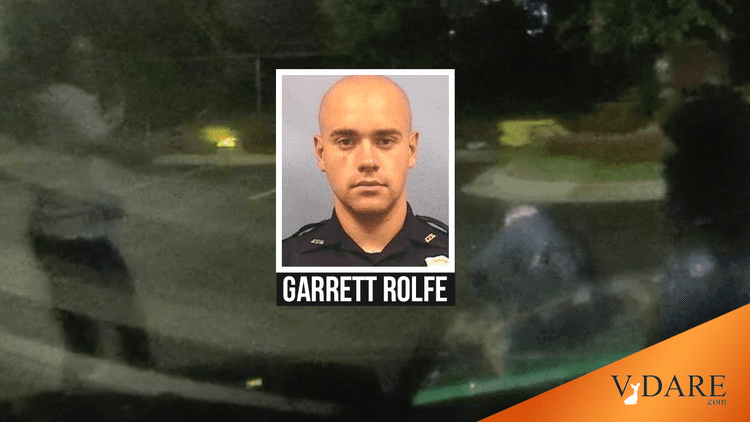 Felony murder is a legal rule that expands the definition of murder. It applies when someone commits a certain kind of felony and someone else dies in the course of it. It doesn’t matter whether the death was intentional or accidental—the defendant is liable for it. The rule is usually limited to felonies that are inherently or foreseeably dangerous to human life, such as arson, rape, robbery, and burglary.

So … What’s the felony? Attempting to arrest a black man for drunk driving?

Shouldn’t Rayshard Brooks be the one guilty of felony murder? His own death was caused by his felony assault on a police officer.

...and the other officer on scene was charged with aggravated assault, Fulton County District Attorney Paul Howard announced Wednesday.

… After shooting Brooks, Rolfe said “I got him” and kicked him, and Brosnan then stood on Brooks’ shoulder, Howard said. The officers did not provide medical aid to Brooks for more than two minutes after he was shot, Howard said.

Their demeanor after the shooting “did not reflect any fear or danger of Mr. Brooks, but reflected other kinds of emotions,” Howard said.

Are their emotions after being attacked are the felony? “Inappropriate Emotions in the First Degree”?

Brosnan has agreed to be a state’s witness, Howard said.

“I don’t remember a circumstance where we had an officer, particularly in a case this important, to step forward and say that they would cooperate with the state,” he said.

Three of the counts against Rolfe are for aggravated assault related to a bullet he fired that hit an occupied vehicle nearby in the Wendy’s lot. Brosnan’s three charges include two counts of violations of oath of office.

Rolfe was fired and Brosnan was placed on administrative duty in the wake of the shooting.

Arrest warrants have been issued for the two and they were asked to surrender by Thursday. With the felony murder charge, Rolfe could face the death penalty if convicted.

Meanwhile, here’s my new Taki’s Magazine column, “The End of Gentrification,” on what happened to murder rates the last two times white elites decided that cops were the Bad Guys and inner city black knuckleheads were the Good Guys.