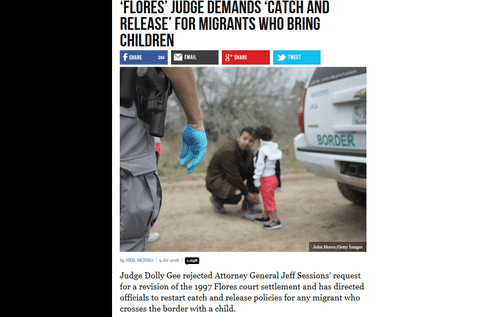 The notorious Chinese kritarch, Dolly Gee of the U.S. District Court for the Central District of California, has again acted to protect illegal aliens from deportation.  Kritarch Gee specializes in releasing illegal aliens from custody, enabling them to disappear into the United States to never appear for their immigration hearings or if they appear, never leave when ordered deported, enabling them to bore deep into American society.  See the VDare.com archive for this repeat offender, Chinese infiltrator, and anchor baby here, here, here, and here.

Sadly though, just when I thought Woke Jeff was back, we get a reversion to Sleepy Jeff in the Department of Justice (DOJ) response to Kritarch Gee’s illegal and unconstitutional actions to protect illegal aliens.  The important background on the issue of either unaccompanied or accompanied illegal alien minors arrested at the border is covered by your humble correspondent at VDare where Kritarch Gee re-imposed Catch-and-Release, the policy of arresting but immediately releasing illegal aliens, ended by President Trump on his first day in office, but mightily imposed with an iron first with an additional policy of 100% prosecution of aliens who enter the United States without inspection.  [Grievance Driven Asian Judge Makes Up Her Own Law, Declares Illegals Should Be Freed, by Federale, VDare, September 15, 2015]

The prosecution of illegal aliens for the crime of Entering Without Inspection, EWI in the parlance of the immigration law enforcement trade, a violation of Title 8 United States Code Section 1325, Improper Entry By An Alien, has enraged the activist left, of whom Dolly Gee is a card-carrying member.  Kritarch Gee thinks that she makes immigration policy.  However, the Constitution gives that authority to the Legislative Branch, not to the Judicial Branch.  And the Legislative Branch has spoken quite clearly, any alien may be detained after arrest until they are removed in Section 303 of the Illegal Immigration Reform and Immigrant Responsibility Act of 1996.

However Kritarch Gee has again ignored an Act of Congress to protect illegal aliens.

Judge Dolly Gee rejected Attorney General Jeff Sessions’ request for a revision of the 1997 Flores court settlement and has directed officials to restart catch and release policies for any migrant who crosses the border with a child.

The directive effectively gives pro-migration Democrats more power to block border reforms, even though they have made clear they oppose any reforms of the court-ordered loophole which has encouraged and allowed hundreds of thousands of Central American migrants to seek jobs in the United States.

Interestingly, Kritarch Gee claims her orders to release illegal aliens from custody is a blow against kritarchy.

“Defendants seek to light a match to the Flores Agreement and ask this Court to upend the parties’ agreement by judicial fiat,” declared Judge Dolly Gee, who was nominated by President Barack Obama.

The reality though is that the original Flores decision was an act of betrayal by the Clinton Administration of the authority of Congress to detain illegal aliens until they are deported.  In the Flores Settlement, Janet Reno abjectly surrendered to the radical left and illegal aliens by acquiescing to a set of rules to the custody of illegal alien minors in direct conflict with a statute authorizing the detention of illegal aliens.  And more importantly, it is a settlement, not a law or an executive agency policy.  Judicial settlements are just that, judicially supervised settlements of lawsuits.  It was well within the authority of a judge to find that a settlement was not longer relevant or suitable to a legal situation that was “settled” 20 years ago.

Kritarch Gee then went on a diatribe against Congress and President Trump’s executive actions against illegal immigration.

“It is apparent that Defendants’ Application is a cynical attempt … to shift responsibility to the Judiciary for over 20 years of Congressional inaction and ill-considered Executive action that have led to the current stalemate.”

Kritarch Gee is obviously complaining about the lack of an ongoing amnesty for past, present, and future illegal aliens that Congress has repeatedly refused to pass, as well as the new Zero Tolerance policy of the Trump Administration concerning illegal immigration and a forceful policy of prosecuting violations of Federal statutes regarding illegal immigration.

That is not within the purview of District Court Judges.  Judges don’t make immigration law, they don’t comment of action or inaction by Congress that they don’t like.  Judges don’t make policy, the political branches make policy, especially in the area of prosecutorial decisions.  Kritarch Gee was acting well outside her legal authority and was the very definition of judicial fiat and imperialism

Sadly though, the reaction of Sleepy Jeff to Kritarch Gee’s judicial fiat, the very thing she claimed she was opposed to, was not to notify the court that the government was no longer intending to abide by the Flores Settlement and was seeking to re-litigate the Flores Settlement in light of a new Administration and new immigration enforcement priorities, as well as acting to defend the authority of Congress to exercise its Constitutional authority in Article I, Section 8, Clause 4, to legislate in the area of immigration, specifically to authorize the detention of aliens through the administrative hearing and deportation process.  Settlements are not statutes, statutes trump any settlement, and settlements are binding only so long as both parties agree to continue with the settlement, especially given that the party to the settlement, Jenny Lisette Flores, is no longer a viable party to the lawsuit, she has long since reached her 18th birthday and is no longer liable to arrest and removal.

Sleepy Jeff should have informed the court that the United States no longer considered the Flores Settlement to be binding and that the United States would litigate the case to the Supreme Court, where, by the way, the government won on the very issue of detaining minors through the administrative hearing and removal process, but the Clinton Administration signed the “settlement” despite the fact that the Reagan Administration won the case.

Sleepy Jeff ill serves the President and immigration law enforcement by failing to act aggressively in defense of Administration policies.  He should act or resign.