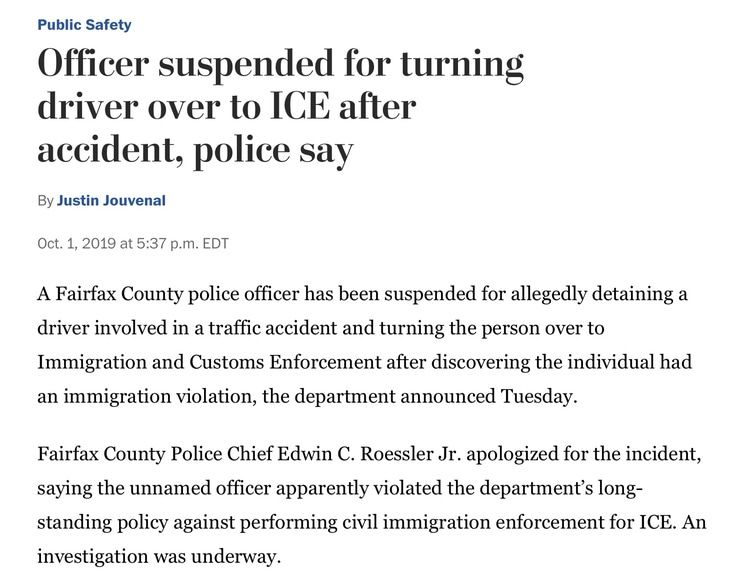 Anarcho-Tyranny And The Strange Return Of Nullification, This Time In Fairfax County

Aaron Burr supposedly said, "Law is whatever is boldly asserted and plausibly maintained." The Left has taken his words to heart when it comes to immigration law enforcement. When Arizona famously implemented a state law in order to discourage illegal immigration with SB 1070, the Left opposed the law on the grounds that only the federal government can set immigration policy. Now, however, we are told that cities and even entire states (such as California) can essentially nullify immigration laws and refuse to cooperate with federal law enforcement.

In the latest case, a Fairfax county police officer was suspended, not for refusing to do his job, but for actually doing his job.

A Fairfax County police officer has been suspended for allegedly detaining a driver involved in a traffic accident and turning the person over to Immigration and Customs Enforcement after discovering the individual had an immigration violation, the department announced Tuesday.

The incident comes as immigrant communities in Fairfax County and across the nation are on edge amid stepped-up immigration enforcement by the Trump administration.

Many liberal jurisdictions such as Fairfax County have sought to limit their cooperation with ICE amid anger over the president’s policies.

The officer found that ICE “had issued an administrative violation to the person for failing to appear for a deportation hearing.” It was the officer's reporting this that may cost him his job.

Let that sink in. We aren’t just dealing with an illegal who was involved in an accident, but one who may have been scheduled for deportation. However, law enforcement will not only refuse to enforce the law but punish those who try to do so in order to appease foreign “communities” that have colonized northern Virginia.

Do Americans who skip court hearings also receive exemption? Of course not. Try missing a tax payment at any level and the bureaucrats will hunt you to the ends of the Earth. Americans exist to subsidize their dispossession and for no other reason.