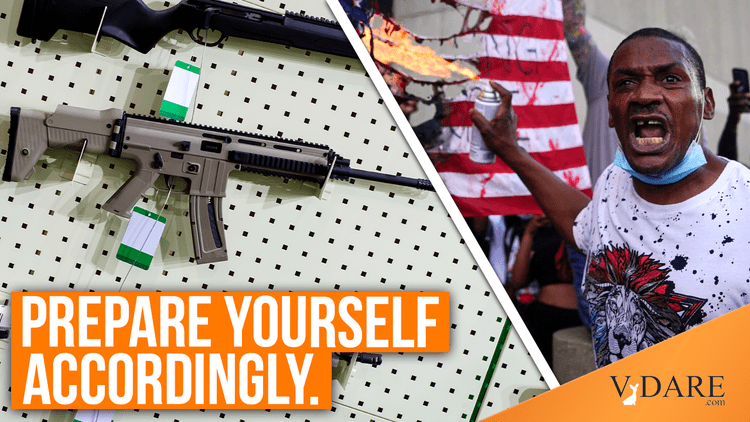 Getting Ready For The Next Round Of Riots: "Preparing For The Fire Next Time"

Chris Roberts has an essay up at American Renaissance, "Preparing for the Fire Next Time," that surveys America's very sad state of affairs. At the end, he recommends a few things that are worth republishing in full:

1) Buy guns. The last time gun rights came before the Supreme Court was District of Columbia v. Heller in 2008. The ruling was on the side of gun rights by a single vote. It is not paranoia to fear the loss of your rights. British citizens enjoyed gun rights until shortly after World War One, and now have some of the strictest gun laws in the world. France is not far behind, with anti-gun laws so tough that after the Charlie Hebdo shootings, the leftist press wondered how the terrorists got their weapons. Chilean citizens lost their right to private gun ownership during their brief Marxist experiment in the 1970s.

It could get harder and harder to buy weapons, so buy them while you can. Support the NRA or similar groups, such as Gun Owners of America (GOA). They fight legal battles and put pressure on politicians to protect the Second Amendment; they need your help.

2) Home school your children, and support home schooling groups. Much like gun rights, the right to teach your own children could disappear; it has already happened in many European countries. Even in the US, homeschooling used to be much more regulated and restricted than it is today. That changed because of the hard work of advocacy groups, largely backed by religious interests. Homeschooling will increasingly become attractive not just to religious parents, but whites generally.

Public school, already poisonous, will get worse. The treatment of white students in overwhelmingly Hispanic and black schools will become more and more nightmarish. Some districts have forbidden schools to suspend blacks “disproportionately” to their percentage of the school—with predictable results. Directives from a Democrat-controlled Department of Education to teach “white privilege,” the evils of Christopher Columbus, and the tyranny of national borders will make this worse.

Rearing honorable white children will increasingly mean homeschooling them, regardless of religious beliefs. The government will not like that. As public schools deteriorate, the government will try to hide failure by making alternatives disappear. You can further encourage homeschooling by supporting such groups as the Home School Legal Defense Association.

3) Leave the cities. Rural America is white, conservative America. Antifa are not found in farming communities. Red States will also do more to protect your rights to bear arms and educate your own children. With working from home becoming so common, it is easier to head for greener pastures.

4) Get to know your neighbors. There is power in numbers, and if the government won’t help you in a crisis, you will need friends. The atomization of society hurts us. Unsure where to start? Go to church.

5) Don’t despair. Whites in America and around the world have work to do. Go to the gym, read a book, learn a skill, make a friend, join a club. So long as whites—AKA Americans—exist, we are worth fighting for. [More]