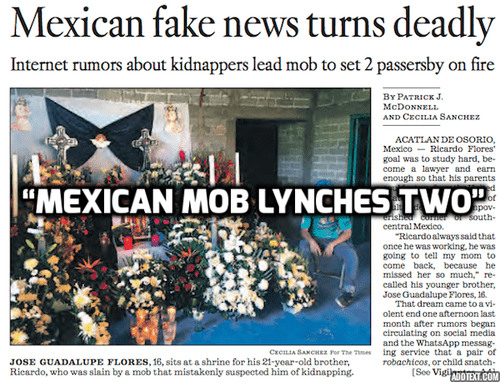 It’s surprising that the Los Angeles Times had an article critical of Mexican culture on its front page, and it actually reports on the shocking incidence of mob violence performing extra-judicial executions. Usually the paper fawns over all things Mexican, but it must find the long history and common occurrence of crowd lynchings to be disturbing enough to report. There is even a word for it — linchamiento.

Here is the Times’ front-page story on Sunday about two men killed by a mob incensed by the rumor that the two were child kidnappers. 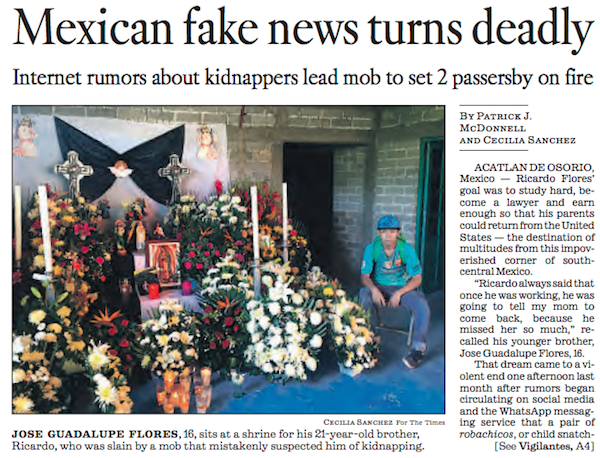 It was a familiar sounding crime story to me, since I read and reviewed the book True Tales from Another Mexico by Sam Quinones. The review appeared in the Fall 2005 issue of The Social Contract. Here’s a snip:

. . . some of the stories are shocking to the core. The tale of how two unlucky traveling salesmen came to be lynched by the town of Huejutla reads like pitchfork justice from the Dark Ages. When the men had chased off a group of children from their truckload of merchandise, one of the salesmen grabbed a young girl and remarked how he would come back in a few years and kidnap her, a crude remark one that was not beyond the social norms of rural Mexico. But because there was a rumor going around that a group of organ-snatching child kidnappers was in the area, the children’s fearful complaints landed the men in jail. The people of the Huasteca region are known for credulously believing the most unlikely tales of crime, which is not surprising. Like many in the Mexican countryside, the villagers of Huejutla are poorly educated and their minds are filled with superstition. Even the diversity-loving BBC has called Mexico “a deeply superstitious society.” . . .

The author, journalist Sam Quinones, notes in passing that lynching is not an unusual occurrence in Mexico; in fact, he reveals that his file of clippings on lynchings from 1994 until 2000 is three inches thick. The state of Morelos, south of Mexico City, has a particular penchant for community executions. In 1994, four men accused of robbery were “shot, stabbed, kicked, hacked, beaten, stoned, and finally burned.” In a Veracruz village, a man suspected of rape and murder was given an extra-legal trial followed by his being tied to a tree, doused with gasoline and burned to death as the event was videotaped.

The LA Times story suggests that social media has worsened the incidence of community lynching — perhaps, but the important admission is “Mob attacks are nothing new in Mexico.”

Apparently Mexican culture is still mired in the same old violence, since “At least 25 people have been slain by mobs in Mexico this year,” according to the paper.

Mexico is the Third World at its violent worst — yet another reason to Build The Wall.

Ricardo Flores’ goal was to study hard, become a lawyer and earn enough so that his parents could return from the United States — the destination of multitudes from this impoverished corner of south-central Mexico.

“Ricardo always said that once he was working, he was going to tell my mom to come back, because he missed her so much,” recalled his younger brother, Jose Guadalupe Flores, 16.

That dream came to a violent end one afternoon last month after rumors began circulating on social media and the WhatsApp messaging service that a pair of robachicos, or child snatchers, was on the prowl.

An enraged mob attacked Flores, 21, and his uncle, Alberto Flores Morales, 56, beating them before dousing them with gasoline and burning them alive on the street outside the police station here. The pair had been mistakenly suspected of child abduction, authorities said.

“It was like a great spell had overtaken the people,” said Lidia Palacios, a handicrafts shopkeeper who witnessed the linchamiento, or lynching, as such mob killings are known in Mexico. “They were yelling, ‘Kill them! Kill them!’ ”

The barbaric episode — reminiscent of mob killings in India fueled by viral messages — illustrates how in an era of proliferating smartphone use, rumors looped on social media and messaging platforms such as WhatsApp can generate hysteria and vigilante justice.

Mob attacks are nothing new in Mexico, where rampant crime, ineffective policing and a pervasive sense that lawbreakers go unpunished fuel citizen outrage. Cellphone video of townsfolk pummeling cornered suspects accused of robberies and other misdeeds is a regular feature on TV news.

In some high-crime areas, handwritten billboards warn “delinquents” and “rats” that they will face street justice.

At least 25 people have been slain by mobs in Mexico this year, including victims beaten to death and burned, and 40 more have been rescued, according to Mexico’s National Human Rights Commission, a quasi-governmental watchdog group.

Law enforcement officials fear that hoaxes spread on Facebook, WhatsApp and other platforms may be exacerbating the disturbing trend. (Continues)