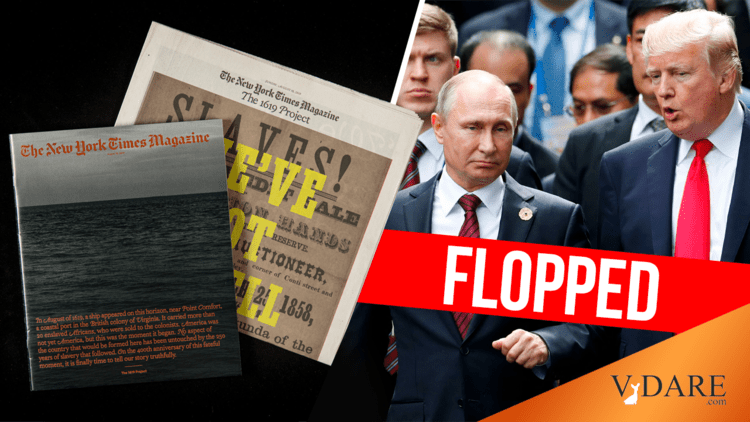 Last week, Dean Baquet, the executive editor of The New York Times, informed his staffers that due to the collapse of their conspiracy to overthrow the president by disseminating their Russian conspiracy theory, the Times was pivoting to Plan B: to dump Trump by promoting their racism conspiracy theory.

As reassurance that this latest intrigue would not fizzle as ignominiously as the Times’ previous machination, Baquet proudly pointed to their 1619 Project. This commemoration of the first blacks arriving in Virginia 400 years ago megalomaniacally

aims to reframe the country’s history, understanding 1619 as our true founding, and placing the consequences of slavery and the contributions of black Americans at the very center of the story we tell ourselves about who we are.

How exactly retconning American history will get rid of Trump was left vague, but Baquet was confident that it was all part of the Times’ seamless plot.

By the way, that’s some hilariously shameless boasting about the power of The Narrative to warp minds.

As I’ve pointed out, The Narrative is pushed less by printing fake news or by completely censoring true news than by the power of the prestige press to pick out ideologically convenient items from the vast surfeit of events and declare them the news about which we are all supposed to have a “conversation.”

Did, say, a Catholic schoolboy “smirk” at a “tribal elder”?

In contrast, in the wake of the vaunted Black Lives Matter protests in Ferguson, did four Teens of Color in St. Louis, shouting “Kill the white people,” hammer a white man to death?

Why are you interested in a local police blotter detail?

And if there is a lot of news for powerful interests to pick and choose amongst, there’s even more history.

Which anniversaries are treated as late-breaking news and which are seen as mere dusty arcana is another exercise in Narrative supremacy.

Consider an example of a dog that has barely been allowed to bark: A number of milestones in Christendom’s heroic struggle to stamp out Islamic slave raiding, such as Thomas Jefferson dispatching the U.S. Marines to “the shores of Tripoli” in 1804 and the Royal Navy freeing 3,000 European slaves from Algiers in 1816, have passed quietly in this century with only minimal 200th-anniversary media commemorations.

“If there is a lot of news for powerful interests to pick and choose amongst, there’s even more history.”
Calling attention to the West’s long, ultimately successful struggle against Muslim slaving is not encouraged because it might be conducive to Islamophobia, which, as the word explains, is bad. On the other hand, obsessing over white American slaving is good, because if it were at all bad then there would exist a word for it ending in “-phobia.” But there doesn’t, so how can you even mention it?

Of course, the Times’ trope that America’s “true founding” was the arrival of blacks in 1619 contradicts another fashionable bit of hype: that America is a Nation of Immigrants instituted by the huddled masses of wretched refuse on Ellis Island.

As we’ve all been instructed in recent decades, immigrants should be “at the very center of the story we tell ourselves about who we are,” much more important than all those boring settlers, founding fathers, frontiersmen, and cowboys, even if, technically speaking, they might have arrived earlier.

And do blacks who aren’t the descendants of slaves, such as President Obama, also get Intersectional bonus points from the 1619 Story Line even though their ancestors sold African-Americans into slavery?

None of these conundrums are useful for the fraught unity of the Democratic Party in 2020; so don’t expect them to be brought up terribly often. It’s much more politically profitable for the Coalition of the Fringes to merely lambaste core Americans for the sins of their forefathers.

Here’s is my Unz Review post on the transcript of Baquet’s talk to the NYT staff, as leaked by Slate:

Dean Baquet: If we’re really going to be a transparent newsroom that debates these issues among ourselves and not on Twitter, I figured I should talk to the whole newsroom, and hear from the whole newsroom. We had a couple of significant missteps, and I know you’re concerned about them, and I am, too.

But there’s something larger at play here. This is a really hard story, newsrooms haven’t confronted one like this since the 1960s. It got trickier after [inaudible] … went from being a story about whether the Trump campaign had colluded with Russia and obstruction of justice to being a more head-on story about the president’s character.

In other words, the New York Times went all in on RussiaGate and that exploded in their faces, so now they’ve had to shift their Main Narrative to denouncing Trump as racist:

We built our newsroom to cover one story, and we did it truly well. Now we have to regroup, and shift resources and emphasis to take on a different story. I’d love your help with that.

As Audra Burch said when I talked to her this weekend, this one is a story about what it means to be an American in 2019. It is a story that requires deep investigation into people who peddle hatred

Not us of course, we only peddle hatred of those who deserve to be hated, not like those hateful people we all hate.

, but it is also a story that requires imaginative use of all our muscles to write about race and class in a deeper way than we have in years. In the coming weeks, we’ll be assigning some new people to politics who can offer different ways of looking at the world. We’ll also ask reporters to write more deeply about the country, race, and other divisions. I really want your help in navigating this story.

… Baquet: OK. I mean, let me go back a little bit for one second to just repeat what I said in my in my short preamble about coverage. Chapter 1 of the story of Donald Trump, not only for our newsroom but, frankly, for our readers, was: Did Donald Trump have untoward relationships with the Russians, and was there obstruction of justice? That was a really hard story, by the way, let’s not forget that. We set ourselves up to cover that story. I’m going to say it. We won two Pulitzer Prizes covering that story. And I think we covered that story better than anybody else.

The day Bob Mueller walked off that witness stand, two things happened. Our readers who want Donald Trump to go away suddenly thought, “Holy shit, Bob Mueller is not going to do it.” And Donald Trump got a little emboldened politically, I think. Because, you know, for obvious reasons. And I think that the story changed. A lot of the stuff we’re talking about started to emerge like six or seven weeks ago. We’re a little tiny bit flat-footed. I mean, that’s what happens when a story looks a certain way for two years. Right?

I think that we’ve got to change. I mean, the vision for coverage for the next two years is what I talked about earlier: How do we cover a guy who makes these kinds of remarks? How do we cover the world’s reaction to him? How do we do that while continuing to cover his policies? How do we cover America, that’s become so divided by Donald Trump? How do we grapple with all the stuff you all are talking about? How do we write about race in a thoughtful way, something we haven’t done in a large way in a long time? That, to me, is the vision for coverage. You all are going to have to help us shape that vision. But I think that’s what we’re going to have to do for the rest of the next two years.

This is no longer a story where the Washington bureau every week nails some giant story by [Washington correspondent] Mike Schmidt that says that Donald Trump or Don McGahn did this. That will remain part of the story, but this is a different story now. This is a story that’s going to call on different muscles for us. The next few weeks, we’re gonna have to figure out what those muscles are.

In other words, the current Racism Mania is the NYT’s Plan B after the spectacular failure of their Plan A: Russia Mania.

Shifting some of the excerpts in different order:

… Staffer: Hello, I have another question about racism. I’m wondering to what extent you think that the fact of racism and white supremacy being sort of the foundation of this country should play into our reporting. Just because it feels to me like it should be a starting point, you know? Like these conversations about what is racist, what isn’t racist. I just feel like racism is in everything. It should be considered in our science reporting, in our culture reporting, in our national reporting. And so, to me, it’s less about the individual instances of racism, and sort of how we’re thinking about racism and white supremacy as the foundation of all of the systems in the country. And I think particularly as we are launching a 1619 Project, I feel like that’s going to open us up to even more criticism from people who are like, “OK, well you’re saying this, and you’re producing this big project about this. But are you guys actually considering this in your daily reporting?”

At this point I’m starting to feel a little sorry for Baquet, who at least comes across as a grown-up. In contrast, much of the Great Awokening seems like a Schoolgirl Snit by young women on staff.