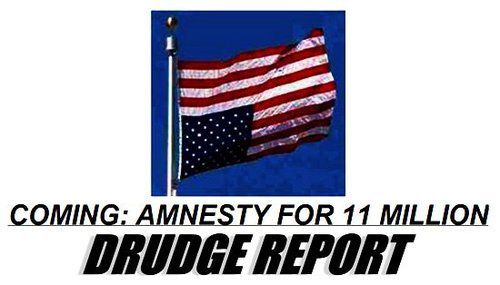 Above: Obama To Give Amnesty To 11 Million.(Or you know, whatever.)

Obama just gave legal status to an estimated five million illegal aliens and the Treason Lobby and its foreign allies are already shrieking for more. But how many more? Just how many illegal aliens have invaded America? There’s reason to believe the government’s estimates are wrong—and that the real number is shocking larger.

For a suspiciously long time, the Main Stream Media has been using the figure of 11 million illegals, presumably because the current official estimate from the U.S. Census Bureau is 11 million-12 million. And Steven Camarota, of the Center for Immigration Studies, tells me that, using various Census Bureau tools such as the Current Population Study, he concurs that the number is around 11-12 million.

But my VDARE.com colleague, economist Edwin S. Rubenstein, while considering Camarota’s estimate to be credible, distinguishes between “net” and “gross” levels of illegals. The “net” level is the number on American soil at any given time. The “gross” number is the number that many have been on American soil at any time in the course of a year, which may contains a great deal of duplication. In an extreme case, a Mexican illegally crossing the border to work in a Texas border town 365 times in a year, and being counted as 365 illegal aliens.

And in January 2005, Robert Justich and Betty Ng, analysts at the major Wall Street investment bank Bear Stearns, caused a stir with an exhaustive report, The Underground Labor Force is Rising to the Surface. [PDF]This report particularly delighted VDARE.com because it supported the daring 2004 estimate made by D.A. King in VDARE.com in 2004: 20 million illegals.

The Justich-Ng report actually cited VDARE.com’s Rubenstein, on the divergence that illegal aliens are causing between the Household and Payroll employment surveys, although the citation was mutilated in the footnotes, no doubt for reasons of Political Correctness.

Justich and Ng found the claims and the processes of the Census Bureau lacking in credibility. Seeking to get more accurate numbers, they developed a brilliantly inventive methodology. As variables, they measured cash remittances (wire transfers) to the nations that are the chief sources of what they call “undocumented immigrants”; housing starts; the building of new schools; and border-crossings. Based on these, Justich and Ng estimated that there were 20 million illegal aliens residing in America.

I recently spoke to Justich, now a consultant. He told me he now thinks that there are 21 million to 25 million illegal aliens present on American soil.

Justich says the Census Bureau simply has no reliable methodology for determining the numbers of illegal aliens. His experience is that illegals avoid census workers—even though there are not asked about their immigration status—and refuses to otherwise participate in the census.

There are even bigger estimates of the illegal alien presence. Back In the fall of 2007, The Social Contract Press and Californians for Population Stabilization collaborated on a press conference (see video) below, and an entire issue of The Social Contract, seeking to answer the question I’m asking here. The speakers at this event all made estimates of the illegal population far above 11-12 million and spoke dismissively about the Census data provided by the government.

James H. Walsh, a retired Associate General Counsel of the Immigration and Naturalization Service and federal (DOJ) prosecutor, and Fred Elbel, of the Colorado Alliance for Immigration Reform, both guesstimated the number of illegals on American soil to be 38 million. Walsh and Elbel both used the “get away” ratio method for determining the total, with a ratio of 3:1—three illegal aliens that got away for every one that got caught. As Elbel emphasized to me recently, other observers used ratios of as high as 7:1. Elbel told me that he now believes the total to be closer to “50 million.”

Walsh recounted repeated cases in which federal officials were caught foisting fakestats on the public, radically undercounting the number of illegal aliens on American soil, and adjusting the numbers based solely on political expediency, rather than improved counting methods. (I was unable to reach Walsh for this article.)

The bottom line: there is significant evidence to suggest that the Census Bureau is either consciously or unconsciously undercounting illegal immigrants. As a result, in the area of illegal alien estimates, radicals have been proved right before.

And remember, any estimate still underestimates the problem. In the past, amnestied illegal aliens have sponsored three relatives, on average (parents, children, and siblings). So even if we accept the lowest possible estimate of around 11 million illegal aliens, Amnesty will result, fairly quickly, in 44 million-48 million new immigrants.

And that doesn’t count their new U.S.-born offspring. If we take the lowest figure (44 million), and the non-Hispanic white population’s below-replacement fertility rate, as early as by 2025, non-Hispanic whites will be in the minority in the nation their forefathers built—and which they will still be paying for.

As the Federation for American Immigration Reform’s Bob Dane commented to me:

What about the next flow? Because our new de facto policy is amnesty every ten years, it ultimately eviscerates the limiting principle that every nation has inherent in its immigration system. And if you have no enforcement of the law, the system collapses.

But that’s the point. Collapsing the System and America’s First World identity has been the objective of Obama’s government all along.

Immigration patriots need to know that it’s not about Amnesty for five million people—it’s about enabling the fifty million that will reduce the U.S.A. to a geographic expression and the historic American nation to a despised minority.