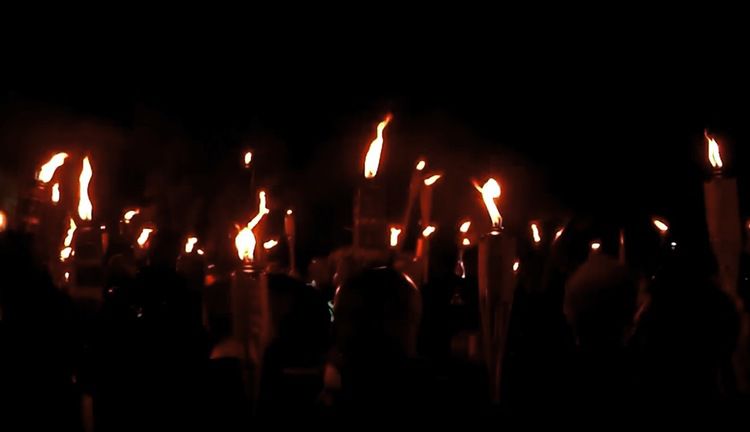 Charlottesville After Two Years: An Alt-History Of What Should Have Happened

America is in the midst of another Ruling Class-orchestrated Moral Panic after El Paso, this time aimed at suppressing all debate on immigration, two years after the Democrat mugging of the August 11-12 2017 Unite the Right rallies in Charlottesville VA. (Dayton, of course, has gone down the Memory Hole). But we would not be in this mess if the GOP, with the partial and, let it be said,  honorable exception of President Trump (who unfortunately has not shown the same instincts about El Paso), had not fallen into a characteristic defensive crouch since August 2017. Hence this Alternative History.

Personally, I find it interesting—and infuriating—to have seen with my own eyes something that will go down in the history books and know those books will be full of deliberate lies. Thus leading Democrat presidential contender Joe Biden literally began his campaign by invoking the Charlottesville rally in 2017, showing the extent to which this event has turned into mythology, at least for the Leftist hysterics who now dominate his party.

Yet it didn’t have to be this way. Since we’re dealing with mythology, let’s think about what President Trump could have done.

In a press conference, Department of Justice prosecutors relied heavily on a report produced by the city of Charlottesville that claimed local officials, including Charlottesville Police Chief Al Thomas, deliberately fomented violence in order to shut down the Unite The Right Rally in 2017. “Heather Heyer died because the police department turned the streets over to anarchy after declaring an "unlawful assembly,” said one prosecutor. “There’s evidence to suggest this decision to shut down this rally was pre-planned by both state and city officials, constituting willful defiance of an injunction by a federal judge that indicated the rally should go forward. Worse, enabling violence was part of this plan, potentially opening these individuals to serious charges and civil liability. All Americans, regardless of their opinions, have the right to state them so long as they are not directly threatening others.”

To the initial dismay of congressional Republicans, the Trump Administration blamed local and state Democratic leaders for the violence in Charlottesville, Virginia. However, former Mayor Wes Signer, former Governor Terry McAuliffe, and former Chief of Police Al Thomas have all found themselves increasingly under fire as witnesses have confirmed there was a pre-determined decision to create disorder and shut down the rally. “Rather than engage the crowd and prevent fights, the CPD plan was to declare the event unlawful and disperse the crowd,” according to the "Heaphy Report" [PDF] copies of which were distributed by the DOJ to reporters “to make sure you finally read it,” in the words of one spokesman. “The Operational Plan outlined the steps by which an unlawful assembly could be declared,” the report continued.

The investigation is focused on whether Mayor Signer or Governor McAuliffe conspired with the police chief to shut down the rally in advance. Spokesmen for both denied comment. “We believe the police followed specific orders to let the situation escalate to a point where the rally could be shut down because of violence,” said a DOJ spokesperson. “The question now is—who gave those orders?”

In response to questions from reporters about whether he is targeting Democrats, the president said he simply wants “the independent investigation to proceed without any interference.”

He then appeared to smirk.

Following the conviction of James Fields on state charges for the murder of Heather Heyer, the Department of Justice issued an official statement saying it was satisfied with the result, but emphasized that the climate which enabled Heyer’s death was no accident. “None of this needed to happen,” it read. “Separating opposing parties at protests is standard practice for governments throughout the country. It’s incredible this didn’t happen here and we need to find out why.”

Since the ill-fated 2017 rally, the federal government has also investigated so-called “anti-fascist” groups, or “anti-fa.” Since President Donald Trump’s inauguration, these groups have been increasingly active throughout the country and until recently, relatively unchallenged by federal law enforcement. The DOJ’s efforts were mostly condemned by progressives, but many were silenced following the widely videotaped attack on journalist Andy Ngo in Portland, Oregon. Video shows Ngo set upon by masked attackers while local police did nothing.

President Trump immediately announced a federal investigation into the Portland city government. “Can you imagine if people in red hats did this?” the president asked reporters. “Can you imagine if this happened to a Democrat in any red state? It would be the biggest story in the world. It would be the biggest crime since what happened to that actor, what’s his name, on that show. But seriously, Chicago is really MAGA country, believe me.”

The President was especially angered by the alleged attack on members of the United States Marine Corps by supposed Antifa in Philadelphia. “Where are the Democrats on this?” asked the president. “Where’s Keith Ellison? Where’s Nancy Pelosi? Where’s Maxine Waters? Where’s CNN—you know CNN loves these guys.” [Liberals cheer as Antifa violence escalates, by Andy Ngo, New York Post, July 17, 2019].

The Department of Justice also announced that 69-year-old Willem Van Spronsen, a Dutch immigrant, was peaceably detained on charges of planning to attack on Immigration and Customs Enforcement (ICE) facility. Department of Homeland Security officials claim they found a manifesto, incendiaries, and a semiautomatic, unregistered “ghost” AR15. Gun control groups have refused comment.

Federal prosecutors also suggested RICO charges may be forthcoming against Van Spronsen’s alleged accomplices, including those who have formed self-described “gun clubs.” However, many Main Stream news outlets have suggested that any alleged planned attacks are simply a “right-wing conspiracy theory.”

The DOJ’s investigations into Antifa networks around the country, in cities as diverse from Nashville to Berkeley, has not gone without criticism. Though the RICO statutes have proved effective, the use of the “Anti-Riot Act” to target Antifa groups is especially worrying to many journalists.

The dangers this poorly drafted statute pose are brought into sharp focus when applied to this case. The government seeks to federally prosecute defendants for conduct that amounts to — at worst — a state law assault offense. The government seeks to distinguish defendants’ conduct from an ordinary simple assault case and confer federal jurisdiction by alleging that defendants were members of an organization that espouses radical political views.

“This administration would never use this law against a right-wing group,” he said.

Some reporters argue that the Trump Administration is not doing enough to fight “White Nationalist” terrorists. The media group ProPublica blasted the DOJ for not filing charges against the “Rise Above Movement” (RAM) after a documentary showing the group active in Charlottesville. [FBI Arrests White ‘Serial Rioters,’ by Gregory Hood, American Renaissance, October 8, 2018] “Wait a minute, you’re saying random reporters should be telling the United States Department of Justice who to prosecute?” asked one spokesman. “Using Antifa blogs as evidence? Are you people completely insane?”

President Trump also announced his support for freshman Senator Josh Hawley’s bill to strip tech companies of Section 230 protection in the Communications Decency Act, essentially forcing them to operate as neutral political platforms. “Google, Facebook, Twitter, all these guys are Antifa!!!” the president said on his new Gab account.

The Republicans’ crusade against Antifa has paid political dividends. Democrats are clearly on the defensive, especially after the implication of Virginia Senator Tim Kaine’s son in Antifa activities and the conviction of a Democrat think tank staffer for the attack on the Marines. Attempting to recoup, House Speaker Nancy Pelosi introduced a bill to rename Ronald Reagan International Airport after Nelson Mandela in the wake of Ronald Reagan’s unearthed comments about African leaders in 1971.