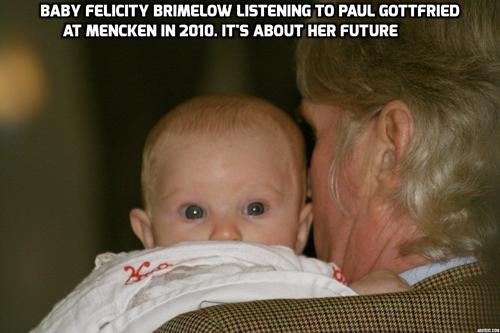 Brimelow At Mencken: “Democrats—Party Of Perjury, Party Of Treason, Party Of Hysterical Screeching.”

Peter Brimelow writes: It’s a measure of the lunatic times in which we live that Paul Gottfried’s entirely peaceful and cerebral H.L. Mencken Club, which I’ve regularly addressed (here and here etc.) had to hold its Eleventh Annual Meeting, on November 2-4, right before the Midterm Elections, on the theme “Is America Still A Nation?”,  unadvertised and essentially in secret, with prominent speakers intimidated into withdrawing at the last moment and no photographs or recordings allowed. It nevertheless succeeded in assembling a significant audience—but what would have happened if Hillary Clinton had won?

Robert Weissberg: Okay, our final speaker is a man whom you know, a British-born financial journalist, founder of VDARE.com, which I read, and author of several books, including Alien Nation: Common Sense About America's Immigration Disaster, 1995, among the most widely-read books on immigration, and his examination of ethnic cleavages in Canada and the use of it as a political football, The Patriot Game, 1986, nearly as famous as his work on American immigration. I'm sure many of you have seen him before, he's always worth listening too, so I give you, Peter Brimelow.

Peter Brimelow: Thank you, Bob, thank you, ladies and gentlemen. Paul, I'm going to record myself, so please don't throw me out! [Gottfried agrees]. Thanks very much. How long have I got?

PB: Right. So I want to thank Paul and Mary Gottfried for putting this conference on, it's more of an achievement than you may realize, but I'll come to that in a minute. And I also want to commiserate with my fellow panel members for not being able to go into the White House because they sat on a panel with me! 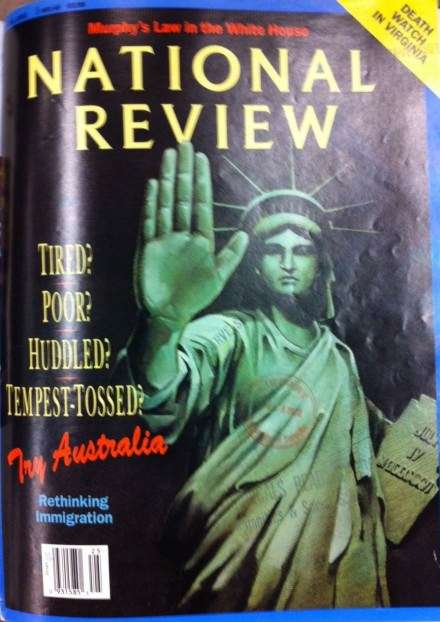 Some of you may not know the story that Paul was alluding to in his talk last night. A couple of years ago, there was a young academic called Darren Beattie who was on the platform here with me. And when it was discovered that he’d later gone to work in the White House, there was a one of these Two-Minute Hates that the Main Stream media specialize in, and he was fired because he was on the same platform as me.

Now my views on immigration have not changed—they've not changed in a long time—but they've been public since 1992, when I wrote a big cover story for National Review (incredibly!) called Time to Rethink Immigration?, which ultimately grew into my book Alien Nation.

But what's happened is that it's just become more difficult to express these ideas, they've become more “toxic,” as the Left says now—despite the fact, or in fact because of the fact, that Americans have elected an insurrectionary president in the form of Donald Trump, whose position paper [PDF] on immigration on August 15, 2015 was perfect. We regard it as perfect statement— it said all the things, including opposing Birthright Citizenship, which we've been saying for nearly 20 years. 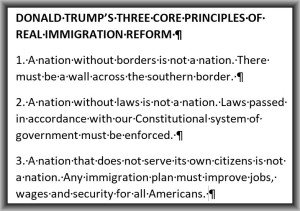 So the general title of this panel is “The Limits Of American Democratic Pluralism.” And I'm here to tell you that those limits have now been reached. We're at the limit.

Since Trump was elected, there's been a more-or-less unreported Reign Of Terror right across the Alternative Right, what John Derbyshire calls the Dissident Right, driven by Cultural Marxists in a weird alliance with Corporate America. Carl Horowitz gave a talk about this phenomenon here a year ago. [Carl Horowitz At Mencken: The Corporation and Radicalism—A Bad Partnership]

This has resulted in massive de-platforming. And that means the president is going into this midterm election at a significant disadvantage compared to situation that he was in in 2016, because he doesn't have this guerrilla army of internet supporters to the same extent that he did then.

For example, in 2016, VDARE.com got significant traffic from Facebook. We don't get any at all now. That's not unique to us, that's common right across the system. But it does mean that it's more difficult to get views, for example on Birthright Citizenship which has been a well-discussed and well-ventilated issue on the Dissident Right for many years now, out—in the face of Main Stream Media propaganda.

Another aspect of this, by the way, which is what our late friend Sam Francis used to call Anarcho-Tyranny. It's an alliance between anarchists on the street and law enforcement.

For example, the several hundred people who were arrested for felony rioting at the time of the President's inauguration have all been let go. But, on the other hand, there’s complete Unequal Justice in Charlottesville, at the Unite The Right Rally. People who were simply defending themselves are going to jail. The people who attacked them were being let off.

So, yes, we've reached the limits of American pluralism. 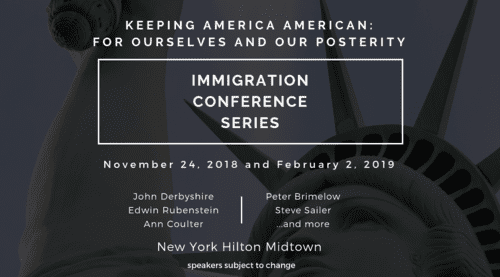 And one aspect of that, by the way—we haven't announced it publicly yet, but VDARE.com's conference, which was going to be in November at the Hilton in New York, has been canceled. The hotel has cancelled us. Now, this is the sixth conference that we've had canceled in eighteen months. I have to say that is not institutionally damaging to us. These hotels are bound by contract, and they have to hold us harmless if they break that contract. So it's not institutionally damaging to us.

But it does mean that the President's policy on immigration can't be discussed in the president's city. And that's a really amazing development which you're not going to hear about in the Main Stream Media or even in Conservatism Inc. media.

Now, my particular topic that I was giving today was “Changing Demographics.” You're all familiar with what's going on here. Basically, after 1965, the American elite, the Ruling Class, decided to Elect A New People. And if this continues, the whites in America—that is to say, the people who until 1965 would have been called Americans— will go into a minority sometime around 2040.

I used to say that I won't be here, but our children will be here. And I have three young daughters. But Lydia has banned me from saying that, she says I’ve got to be here! I’ll be 93, but I'll do my best!

They were well on their way to doing this. But there are paradoxical effects in the way this is working. We will see them in the short-term, and the medium-term really, for the next several election cycles.

What's happening is that America is coming apart demographically. There's a bipolar distribution. There are actually now ”two nations in the bosom of one state”,—to quote Lord Durham’s Report, which Wayne [Lutton] and I know about because we know about Canadian history.

The GOP, or as I call it, the GAP, the Generic American Party because it's done nothing to deserves this, is basically the white party of America. Over 90% of its support comes from white Americans.

The Democrats are basically the minority party. They're a party of a coalition of minorities with a couple of subgroups of whites in there, which I'll discuss in a moment.

They don't look anything like each other. I mean, people say this when they go to the conventions. They just have nothing in common.

([John Derbyshire arrives]. Good morning cousin! Some of you may know that John just did his 23andMe analysis, and it revealed the amazing fact that he and I are somewhere between 3rd and 5th cousins. We come from the same area of the North of England.)

I call these two parties “America” and "anti-America"—a pleasing coincidence. And we saw in the 2016 election, if you look at it in this light, a very remarkable development. The minority vote, the share of the Democrat presidential vote that is cast by minorities, has been rising very dramatically, and it rose under Hillary even though she didn't do that well with blacks, she did so much worse with whites. 45% of her vote was non-white. This is a party which is as recently as 1964 captured a majority of the white votes in America.

Ed Rubenstein did an analysis for me on VDARE.com and we factored in  two of the significant white subgroups in the US, namely Jews and homosexuals who vote for Democrats by a factor of 80%, despite Trump having Jewish family members, and despite him not engaging with the gay marriage issue and flying the gay flag and all that kind of thing, it’s done him no good at all.

About 52%, somewhere between 52 and 53% of the Democrat vote, was cast by what we might call "non-generic Americans."

And what this means is that the Democratic party is tipping. It's tipping like a housing project. There's a movement of whites out of the Democratic party, which is quite spontaneous. And, as I say, it's not really anything to do with anything the Republican Party has actually done, because it's actually done nothing. It just is. It's what Kevin MacDonald calls an "implicit community,” like NASCAR, that whites just flock to without really knowing why they flock to it.

And this is having a very interesting effect in recent elections, which apparently Democrats didn't anticipate, which is these old white Democrats are finding that they're getting defeated in primaries by minority candidates—in New York City, and in Massachusetts, two long-established Democratic Congressman congressmen fell, even though they were as Left as hell. And, of course, in Georgia and Florida, non-white candidates won the gubernatorial and senatorial nominations against the objections of the Democrat Party Establishment, which didn't want to take this kind of risk.

So the parties are polarizing out on racial grounds.

There's another aspect of this, which I think is significant, which a writer we have, Lance Welton, explored on VDARE.com, which is that if you look at these Democratic communities, namely minorities, Jews, gays, there's technical literature on it, and they're systematically more emotional, and in fact unbalanced—particularly in the case of homosexuals, they're really screwed up—than generic American whites are. They're just more prone to psychiatric disorders, and more emotional, on all kinds of measures.

Now we're not aware of this, because our peerless leader Paul Gottfried is a such model of dispassionate calm and turn-the-other cheek stoicism—in fact, in every respect, he’s been corrupted by these WASPS he keeps hanging out with. But it is true.

They are also the Party of Treason. They're in the process of displacing the American electorate—they're literally Electing A New People. Which, by the way, is something is prohibited under the UN Genocide Convention. There's something that's rather difficult to explain away.

But we now find that they're also the Party of Hysterical Screeching—because their base group is so emotional. And I think we saw that in the Kavanaugh hearings. The Democratic Senators simply couldn't restrain themselves.

So my advice to America generally is, buy ear plugs.

And of course, stop immigration. Thank you.