Last week's headliners were two mass shootings: one in El Paso, Texas last Saturday morning, followed in the small hours of Sunday morning by another in Dayton, Ohio. The El Paso shooter killed 22 people; the second killed nine. The El Paso guy is in custody; the Dayton one was killed by police.

Sincere condolences from Radio Derb to the wounded and bereaved. But this is a nation of a third of a billion people, though, and ghastly things will happen—some of them by human agency, some by natural catastrophes.

I guess my attitude is just fatalistic. Of the public reactions to these two events, the only one that really returned an echo from my bosom was the one by TV astronomer Neil deGrasse Tyson. Tweeted Tyson on Sunday: 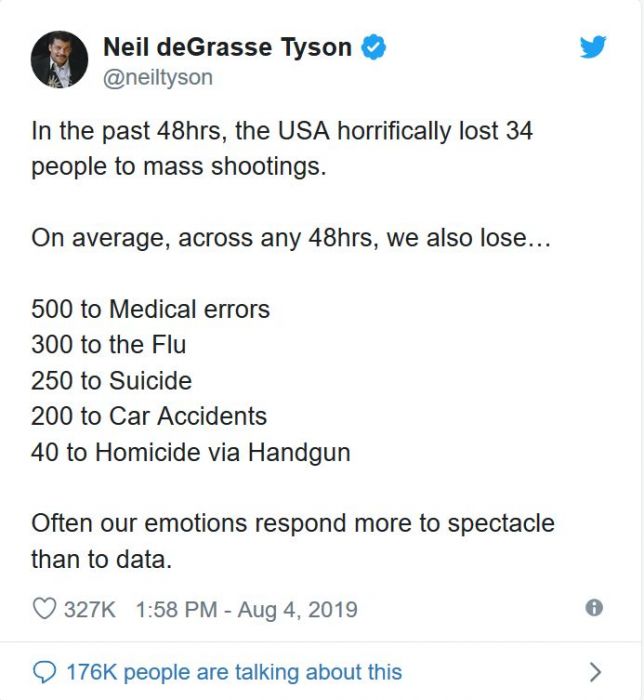 Tyson's tweet occasioned much screeching and pearl-clutching from goodthinking types. [Dr. Neil deGrasse Tyson slammed for tweet about mass shooting data, by Nick Givas, Fox News, August 6, 2019] He responded with a half-hearted apology, which of course nobody accepted. [Neil deGrasse Tyson's Tweet About Mass Shootings Was Bad. His Apology May Have Been Worse, by Justin Bariso, Inc.com, August 7, 2019]

I can't claim much engagement with Tyson. I've never read one of his books or watched one of his TV programs.

That's not from any antipathy; I know next to nothing about the guy. The only pop-science books I read are ones editors send me for review, and it just happens that no one's sent me one of Tyson's books. I don't watch much TV—some conservative commentary, currently Tucker Carlson, and now and then a sitcom that tickles my fancy.

So I've totally missed Tyson, without prejudice. (Except that, like everyone else not thoroughly brainwashed, I assume by reflex that any black person doing science on TV is an Affirmative-Action hire. Reflexes like that are among the evil consequences of Affirmative Action, and I don't think tell us anything important about either the subject or the object.)

I'm with Tyson on this one, anyway. I'm a numbers guy, and plainly so is he. With news events like this all sorts of cognitive biases kick in. You could start your googling with the phrase "salience bias."

That especially applies when politicians and their media stooges amp up the salience for all they're worth.

Sorry, but I prefer the cooler numerical approach. Hey, Mr. Tyson: You ever in Long Island? I'll buy you a drink. I'm an astronomy buff from way back; my high school had a 12-inch reflector.

And of course the politicians and pundits milked the killings for all they were worth. Since competitive politics right now is mostly among contenders for next year's Democratic Presidential nomination, and pundits break about nine to one Democrat, most of the commentary blamed the events on President Trump and the 63 million deplorables who, in violation of all the laws of nature, voted for him in 2016.

Squeezing political points out of the El Paso and Dayton horrors wasn't easy, though.

It looked at first as if it was going to be easy. Both the shooters were white, so the Main Stream Media could freely portray them as psychopathic monsters. Well, they are—or in the Dayton guy's case, were—psychopathic monsters; but then, so are the black murderers who commit most of our mass shootings but get way less media coverage and generate very little interest among politicians.

And then, the El Paso killer had (allegedly) posted a manifesto online. It's 2,400 words—which is fairly brief, as these things go. The manifesto of 2011 Norwegian mass killer Anders Breivik ran to half a million words. [ Breivik sent 'manifesto' to 250 UK contacts hours before Norway killings,  by Matthew Taylor, Guardian, July 26, 2011]

There was enough in those 2,400 words, though, for the CultMarx mob to argue that the killer was inspired by President Trump--even though the killer himself, in the manifesto, explicitly told us he'd formed his ideas before Trump showed up.

The main point that got the CultMarx mob's attention: the killer writing that:

This attack is a response to the Hispanic invasion of Texas … I am simply defending my country from cultural and ethnic replacement brought on by an invasion.

With a hundred thousand people a month coming in across our southern border without permission, terms like "invasion" and "ethnic replacement" don't seem hyperbolic to me. And yes, some of Donald Trump's past statements indicate similar lines of thinking; although in two and a half years as Chief Executive he hasn't actually done much to defend our nation's demographic stability.

Other notions expressed in the El Paso guy's manifesto are un-Trumpian or actually anti-Trumpian; he grumbles about corporate greed and the degradation of the environment, for instance.

So the guy has a lot of different beefs he was working off, some of them approximately Trumpian. The way he worked them off was by murdering 22 random strangers in a Walmart store. That was insane; and yes, the guy is a psychopathic monster. 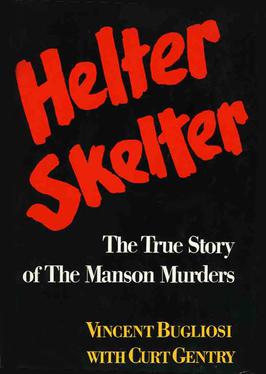 And nobody ever claimed it did.

Crazy people do crazy stuff for reasons that make sense to no one but themselves.

Milking last weekend's horrors for CultMarx talking points got even more difficult—or, as the progressives say, "problematic"—when it turned out that the Dayton killer was Antifa. He didn't leave a manifesto behind, but he did leave a long trail on social media that left no doubt.

The Dayton Daily News in fact reported on Tuesday that the killer had been present at a May 25th rally protesting the KKK. He had showed up in full Antifa gear, complete with face bandanna, sunglasses, and a gun, possibly the same gun he used last weekend.

This has of course proved deeply uninteresting to the Democratic candidates and their media shills. Here's a random headline, this one from CNN, dated Wednesday—the day after the Dayton Daily News report. Headline: Dayton shooter had an obsession with violence and mass shootings, police say.

You have to read 300 words into the report before the word "Antifa" shows up.

But while I doubt there are any direct political causes for events like these, there may very well be deeper social causes.

In between news stories about those mass killings last weekend, my eye fell upon this unrelated item. Headline from the Daily Mail: A Quarter of Millennials Say They Have no Friends, Study Finds. [by Natalie Rahhal, Dailymail.com, August 2, 2019]

On the strict definition, the El Paso guy was just post-millennial, 21 years old. "Generation Z," the post-millennials are sometimes called. So how are they doing?

Different headline, this one from VoiceOfEurope: Gen Z Crisis: "9 in 10 young Brits think their lives are meaningless." [by Arthur Lyons, August 5, 2019]

Just a couple more data points on this theme.

First data point: The sister of the Dayton shooter, who was one of those killed in the shooting, identified as a guy. Her birth name was Megan, but to a close circle of friends she was Jordan.[Dayton shooter Connor Betts’ slain sister was a transgender man: report,  by Natalie O'Neill, NY Post, August 9, 2019]

Second data point: That Dayton shooter participated as vocalist in a fringe music scene called "pornogrind." Two of the bands he performed with bore the names Menstrual Munchies and Putrid Liquid.

I really, really don't want to know any more about pornogrind, but by all means look it up if you have the stomach for it.

I have no comment of my own on those two data points, but I'll borrow one from Carson Robison: "There's something cockeyed somewhere."