The Battle(s) Of Berkeley—Someone Is Going To Get Killed. Where Is Trump?

Above, Lauren Southern, with MAGA helmet, on the front lines at Berkeley.

“Weimerica” is a common term for neoreactionaries and right wingers disgusted with the decadent culture and self-hatred of the modern United States. But it took on a whole new meaning Saturday when street fighting between organized groups of the Left and the Right broke out in Berkeley, California as antifa tried to shut down a free speech rally. And by all accounts, it was the nationalists who came out on top.

Naturally, the Main Stream Media is outraged. The same people who were feting antifa violence at the inauguration and writing puff pieces about the Black Blocs are demanding a crackdown. One Shane Bauer of Mother Jones spent the day chronicling the Left’s defeat and occupied himself the following morning screaming for everyone (including President Trump) to condemn the right wing protesters. Of course, it was Mother Jones which wrote a gushing article about antifa just after Richard Spencer was sucker punched. [The Long History of “Nazi Punching,” by Wes Enzinna, Mother Jones, January 26, 2017]

The MSM seems utterly determined to ignore the core truth at the heart of the violence in Berkeley—it was the antifa who showed up determined to cause trouble and deny others their right to free speech. Indeed, this is the only thing antifa ever do, the sole purpose of their entire existence. All antifa had to do to avoid violence was to not show up, much like there were no conservatives or nationalists attacking the tax protests against Donald Trump which took place around the country yesterday—nor, for that matter, the much-hyped post-Inauguration “Women’s March.”

Conservatives and libertarians were attempting to hold a “Free Speech Rally” in the Leftist city in protest of several recent incidents when violent CultMarx totalitarians used force against words they didn’t agree with [Free Speech Rally in Berkeley results in several injuries, 20 arrests, Daily Californian, April 15, 2017] 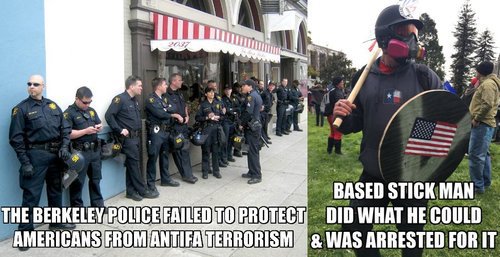 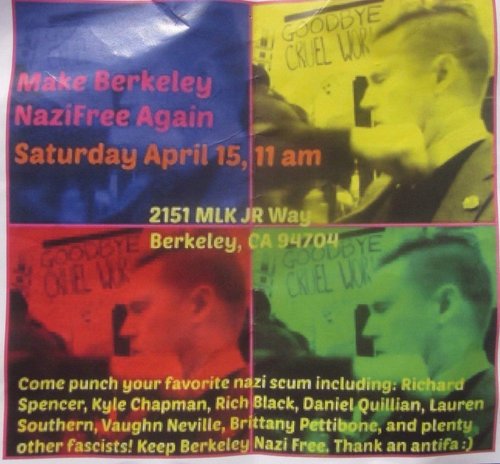 An antifa flyer reportedly circulated before the event

Saturday, however, was different. Antifa has been quite open about their desire to “shut down” the rally [Why The Bay Area Must Shut Down the Alt-Right Rally on April 15th, IndyBay, April 5, 2017]. So nationalists came prepared for violence, knowing the police would not protect them. And that’s precisely what happened—it just didn’t end the way antifa thought it would.

In short, Leftists started it, Rightists finished it.

What is really happening here: the American Right is finally learning to fight back, both ideologically and physically. They are breaking the taboos of the past. And powered by the freewheeling internet culture that spawned the new nationalism, the Trump supporters who rolled out to defend conservative speakers were dressed in colorful, often humorous costumes, as opposed to the grim, blackclad antifa, the staid enforcers of the status quo. 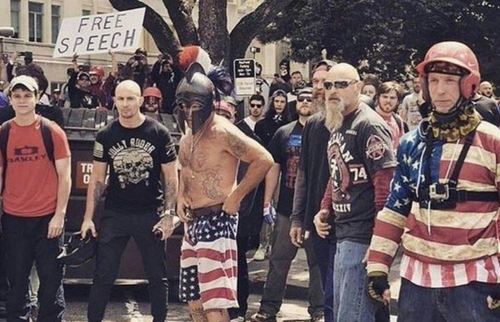 Such conflicts are likely to escalate. Universities are now increasingly open about their desire to simply ban speech they don’t agree with. On Friday, Alabama’s Auburn University, gave in to the “heckler’s veto” by banning Richard Spencer from campus because of “credible evidence that it will jeopardize the safety of students, faculty, staff and visitors” [Updated event on Spencer event at Auburn, Auburn University, April 14, 2017]. Naturally such threats are only coming from the Left.

Spencer, for his part, has vowed to show up at Auburn on April 18 anyway. The MSM, is doing its best to pin the blame for any violence on Spencer himself— even the “conservative” Washington Times described the head of the National Policy Institute in weasel-like fashion as “accused of espousing Nazism” and made sure to use a photo of him scowling. [Auburn cancels Richard Spencer appearance; alt-right figure says he’ll speak anyway, by Andrew Blake, April 15, 2017]

Regardless of what happens in Alabama, it is also all but certain there will be another Battle of Berkeley in two weeks, when Ann Coulter is scheduled to speak in California on April 27.

All of this was predicted even before Trump was inaugurated. And as VDARE.com Editor Peter Brimelow wrote after attending the Inauguration:

The leaders of what I have called the nation of “Anti-America” have always been absolutely conscious that there is still time for the Historic Nation of America to unite, to throw off what from a demographic point of view is undeniably a Minority Occupation Government, and to stop its Electing A New People through immigration policy. And they are absolutely determined to prevent the Historic Nation of America from uniting—by “any means necessary.” But to their horror, it seems to be happening anyway. Hence their anti-Trump tantrum. We’re facing what was called in the case of the Civil War an irrepressible conflict. But this is America. People have guns. It will come to blood.

It is now clearly inevitable that someone is going to get killed, on one side or the other.

What’s truly incredible: even now, the American Right is still fighting with one hand behind its back, receiving no support from its supposed political leaders, including Donald Trump.

Though President Trump has gone out of his way to praise his non-white supporters, he has not once specifically praised the European-Americans who were at the core of his winning coalition. Even worse, he has not once defended his supporters who are being attacked on the streets and fighting in his name.

Trump may be President of the United States, but it is still very dangerous to wear a MAGA hat or Trump shirt in some cities.

In contrast, Leftists of the most extreme variety still enjoy adoring MSM coverage and official support from academia, as well as a “hands off” approach from law enforcement.

Consider Yvette Felarca of By Any Means Necessary, an extreme Left wing activist in Berkeley who has been quite open about using violence in the past to shut down speech with which she disagrees [Middle school teacher with history of instigating violence plays key role in Berkeley riot, by Victor Skinner, EAGNews, February 2, 2107]. The Daily Californian went out of its way to describe libertarian activist Lauren Southern as a “controversial right-wing speaker” and a “right-wing radio host.” But Felarca was simply identified as a “BAMN organizer” and quoted about how her group is “here to stand against… the whole Trump administration.” [Free Speech Rally in Berkeley results in several injuries, 20 arrests, April 15, 2017]

Of course, the “whole Trump administration” doesn’t seem to care too much about what is happening one way or the other. Even Attorney General Jeff Sessions, though he is taking action on immigration, has not cracked down on “antifascist” or extreme leftist groups around the country who openly declare their intention to attack Trump supporters. There has been no effort to secure free speech on campus by withholding federal funding from universities who deny the First Amendment.

But the new movement that is emerging is not dependent on Trump himself. Indeed, Trump is merely a symptom of the larger counter-revolution against a hostile elite which thinks it has the right to control what Americans are allowed to think, say and vote for.

Americans increasingly recognize the totalitarian Left for what it is. And the Beltway Right and Donald Trump himself can either back up those who are willing to fight for America’s First Amendment rights or they will simply be left behind.