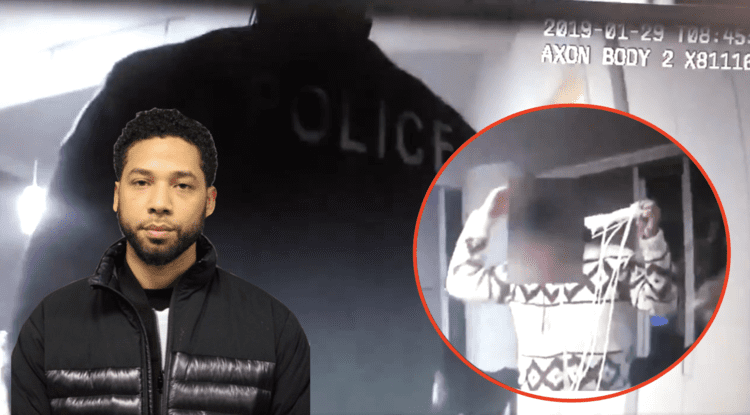 The old “Rope a Dope” move.

He’s an actor not a writer.

Aaaand action in three, two, one…..

*under* his sweater, doesn’t make sense!

The rope was routed clear underneath his hoodie?

CBS Chicago reporter Charlie De Mar is tweeting out wonderful real video of the Jussie Smollett hate hoax. It’s like that Taiwanese network that concocts computer animation videos of events in the news, like Tiger Woods being attacked with a golf club by Mrs. Woods, except it’s real.

I tracked down surveillance of the Osundairo's buying supplies before "attack"

Countless phone calls placed for this.

They probably shouldn’t have said, “Here’s a bunch of stuff we’re buying, not for a hoax or anything. Just some stuff we wanted.”

Once again local reporters are running circles around the cable news ppl. All the best reporting in this case has come from three Chicago area reporters. This is why we need local news, if it was up to CNN we would have never known any of this

Video from inside taxi of Osundairo brother’s on their way to meet Jussie Smollett night of reported attack..according to CPD@cbschicago pic.twitter.com/kYbUcoiwi5

Comments from Twitter on the cab scene where the Nigerian bodybuilder brothers and the cabbie appear to all be dressed in white:

I didn’t know the Michelin Man had a posse.

It’s also an outtake from Empire Strikes Back (!), when Luke almost died in the snow, before Han rescued him.

Are those guys supposed to be Klan or snow ninjas?

I think it’s a false color artifact of a low-lux camera in the taxi.

Jussie meant to say they were dressed in white not actually white people. Is that going to be his defense?

As I’ve been saying for awhile, the Jussie Smollett story seems like a watershed in terms of Crime Does Not Pay: if the cops really have it in for you, as they seem to have had it in for the obnoxious Jussie (perhaps due to his links to one side in the then-upcoming Chicago mayoral election that Jussie’s Toni Preckwinkle-Kim Foxx-Tina Tseng team lost), there is so much security camera footage these days that eventually they can figure out most crimes.

Maybe what police departments need to do is hire more desk jockeys to sift through enormous amounts of video. I suspect this will be a big labor relations battle coming up. The police unions will insist that only highly paid police academy graduates should be allowed to sit at a desk and review countless hours of video, while management will want to hire $20/hour people.