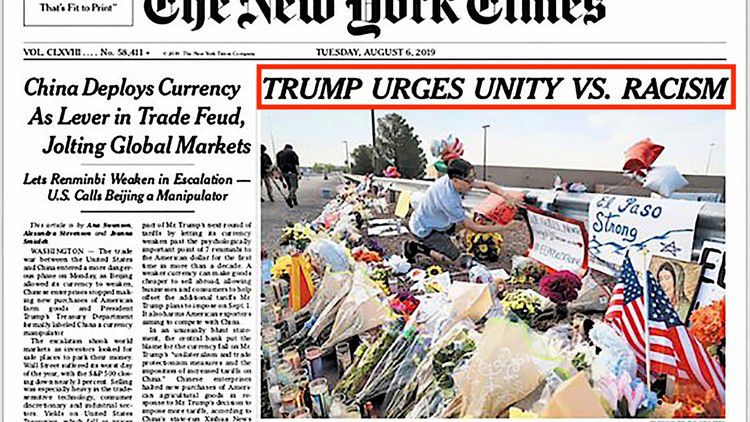 President Donald Trump responded to the El Paso and Dayton shootings in the worst way possible. He called for gun control, the death penalty for “hate crimes,” and more tech censorship. It’s a plan Kamala Harris would envy and if implemented, would let the federal government silence Trump voters on social media and take their guns. Trump also speculated that his plan should be paired with “immigration reform”—a term he left undefined, but conventionally used to mean Amnesty. Instead of defending his supporters or shifting the focus onto the Antifa Dayton shooter, he capitulated to the Main Stream Media narrative. He received no credit and Democrats and journalists continue to blame the president for the El Paso massacre (and some even for Dayton). The president’s disastrous response was one of the lowest points of his presidency and it may cost him re-election.

Trump addressed the nation from the White House Monday. Most Democrats and journalists had already blamed him for the El Paso shooting and said his rhetoric drove the deranged shooter to kill.

"In one voice, our nation must condemn racism, bigotry and white supremacy,” Trump stated. “These sinister ideologies must be defeated. Hatred has no place in America.” He also said “hatred pulled the trigger.” [Trump condemns ‘white supremacy,’ calls for mental health and gun reforms after double mass shootings, by Brooke Singman, Fox News, August 5, 2019]

Trump’s plan to prevent these shootings centered around “red flag laws.” “We must make sure that those judged to pose a grave risk to public safety do not have access to firearms, and that if they do, those firearms can be taken through rapid due process,” Trump said. “That is why I have called for red-flag laws, also known as extreme-risk protection orders.”

These laws would allow government officials to deny and confiscate guns from individuals deemed possible threats. But the reasons for seizure could be limitless, especially in today’s climate. It’s a Pandora’s Box that will empower Leftist bureaucrats to strip American patriots of basic rights.

The idea was reportedly put in Trump’s head by South Carolina Sen. Lindsey Graham, a man who rarely fails to advance terrible ideas. [A Rare Gun-Control Proposal That Could Unite Congress, by Russell Berman, The Atlantic, August 6, 2019]

In an alternate universe, in a serious country with a government that would flag only those with a history of violence or severe mental illness, it might work. But today, it will likely be used against political dissidents.

Indeed, several states, such as Florida, already have this law on the books. Since the Sunshine State implemented this policy in 2018, it has confiscated guns from nearly 2,000 people. All it takes for Florida to seize someone’s arms is for a concerned individual to file a report and for a judge to agree guns should be taken. [As Trump pitches red flag laws, here's how local and Florida lawmen tap into gun seizure law, by Karl Etters, Tallahassee Democrat, August 5, 2019]

The president’s other ideas were equally bad.  He called for the federal death penalty against those convicted of “hate crimes.” The idea of hate crimes is, of course, ridiculous since most violent crime is motivated by some form of hate. What kind of hate makes one crime worse than others? For the Leftists who make these laws, it’s the hate that comes from whites that requires extra punishment. Obama’s Attorney General Eric Holder actually admitted this during hearings on the legislation, rendering it a clear violation of the Equal Protection Clause and almost certainly unconstitutional.

Trump’s endorsement of these laws and the need to kill those convicted creates a disturbing opening for future Democratic administrations. One may not need to be a murderer to warrant execution by the federal government—a court will just need to rule you have “hate” in your heart.

The third bad idea was Trump’s call for government-directed censorship: "I am directing the Department of Justice to work in partnership with local, state, and federal agencies and social media companies to develop tools to identify mass shooters before they strike," he said.

8chan has already been deplatformed for allegedly hosting the El Paso’s shooter’s manifesto (which it denies). And if the DOJ is encouraging tech giants to censor, it won’t be the last site purged. Trump is supposed to use state power to fight tech censorship, not empower it. His directive is terrible news for free speech and will, like “red flag” laws, be abused by Leftist bureaucrats.

The president could have highlighted left-wing violence and the need to counter it. The Dayton shooter, Connor Betts, was an antifa supporter who fantasized about violence against right-wingers and Christians. He also frequently interacted with left-wing journalists and groups on Twitter. Betts may have targeted the bar he shot up because of its association with the police and conservatives. But Trump didn’t even get the shooting’s location right—mistakenly saying it happened in nearby Toledo, Ohio. The president loudly condemned “white supremacy” and “racism” but couldn’t denounce left-wing violence.

The president did not bring up his “immigration reform” paired with gun control idea at the Monday press conference. He shared this idea in a tweet that morning, but did not elaborate on what he meant. Does he want to push Jared Kushner’s deeply flawed immigration plan through Congress, or does he want to revive some form of Amnesty?

Needless to say, no one gave the president credit for betraying his supporters. Most mocked his response. “The president is weak. And wrong,” Sen. Cory Booker, a Democratic presidential candidate, tweeted. “White supremacy is not a mental illness, and guns are a tool that white supremacists use to fulfill their hate.” ['Hollow,' 'weak': 2020 Democrats react to Donald Trump's remarks on mass shootings, by Nicholas Wu, USA Today, August 5, 2019]

NBC News ran an analysis that claimed Trump’s response was a “tragic self-own” since the president is responsible for hate in America. [In tragic self-owns, Trump denounces racism, and calls for immigration reform, by Jonathan Alter, NBC News, August 5, 2019]

Trump held tight to a political base that demands allegiance to the promises he's made to defend gun owners' rights and advance a border policy that is infused with racist rhetoric. Rather than risk alienating his allies, Trump chose to expose himself to claims of responsibility — "hatred pulls the trigger," said the president who hurls invective at his adversaries — and to reminders that he hopes to accomplish with immigration policy what the alleged shooter could not get done with bullets.

So what did Trump accomplish? Nothing positive. Middle America loves its guns and does not want to give them up. A national Red Flag law would probably result in many Americans losing their Second Amendment rights for political reasons. And many Trump voters will also be silenced during the upcoming campaign, thanks to the president himself.

Will the president’s catastrophic response be the final straw for Trump’s sorely tried base? If they can’t count on their champion to defend their Second Amendment and free speech rights, they will stay home.

The president could have condemned the individual responsible for the El Paso shooting while separating it from the cause of immigration patriotism. He could have framed border security and immigration reduction as ways to reduce social tensions. He could have forcefully condemned Leftist violence and used Dayton to put critics on the defensive. Instead, he sided with the Swamp against Middle America.

Trump better hope Congress is too divided to pass his terrible ideas. His political future depends on it.