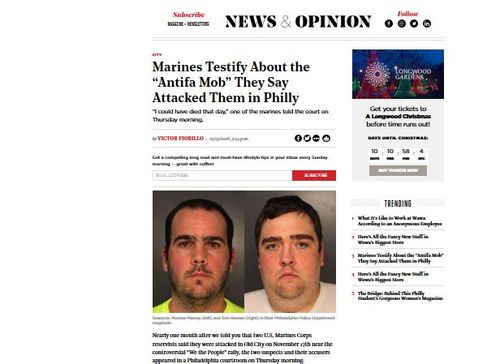 Along with the police, small businesses, and patriotic Americans generally, antifa are not big fans of the military. So it's not surprising that some antifa are accused of attacking Marine Reservists in the aftermath of a recent demonstration in Philadelphia. What is surprising is the almost total lack of attention to this case, including among conservative media.

Yet local media (reluctantly, one suspects) is covering the case. The accusations are shocking.

Nearly one month after we told you that two U.S. Marines Corps reservists said they were attacked in Old City on November 17th near the controversial “We the People” rally, the two suspects and their accusers appeared in a Philadelphia courtroom on Thursday morning.

The marines, Alejandro Godinez and Luis Torres, both testified in uniform about the incident, while three marine officers, including their commanding officer, stood in the gallery. The suspects, Thomas Massey and Tom Keenan, who have been linked to antifa on websites and social media, sat together with their individual lawyers and did not speak.

[Marines testify about the "antifa mob" they say attacked them in Philly, by Victor Fiorillo, Philadelphia Magazine, December 13, 2018]

Right of the bat, it should be noted that this is an attack by two white men on two servicemen of color. If this had been two white supremacists accused in this attack, this story would be featured in every mainstream media outlet in the country. As it stands though, you likely won't hear much about it. Incredibly, one of the so-called anti-racists even hurled ethnic slurs at his alleged victims, calling him a "sp*c" and a "wetback."

If the Marines' testimony is true, the entire incident is Orwellian. The Marines didn't even know there was a rally going on and were simply approached by the antifa.

According to the marines’ testimony, they were touring historical landmarks near Front and Chestnut streets when suspect Thomas Keenan approached them. Godinez testified that Keenan asked them “Are you proud?,” to which Godinez remembers responding “We are Marines.” Torres said that he remembers Keenan asking “Are you Proud Boys?,” an allusion to one of the alt-right groups behind the rally, and one that Torres said he didn’t understand. “I didn’t know what Proud Boys meant,” he said.

Whatever Keenan said, both marines testified that Keenan, Massey, and approximately ten other people — men and women, some masked and some unmasked — then began attacking them with mace, punches, and kicks, and calling them “nazis” and “white supremacists.”

On the stand, Godinez said that he was “bewildered” by being called a white supremacist and immediately cried out, “I’m Mexican!”...

Godinez testified that he was maced at least six times, hit in the head, and kicked in the ribs, and he said that while he was being “stomped,” members of the group, which the judge and the district attorney’s office have both referred to as a “mob,” chanted “f**k him up” over and over again.

The two victims claim to still be suffering serious injuries. One can only imagine what a nightmare this was, as a mob randomly approaches you, starts demanding answers to questions that in your mind seem nonsensical, and then begins attacking you for no reason.

Yet we can receive a clue why this kind of thing happened even in this coverage. Though Philly Mag should deserve some credit for even covering this story, notice the story casually refers to the Proud Boys as an "alt right" group. The group of course angrily denies the label and has for some time. Yet this doesn't matter. In the same way VDARE.com magically becomes "white nationalist," or, for that matter, President Donald Trump does, the media thus assigns a smear word against people. In the modern age, a reporter will fall all over himself to make sure you can identify as whatever gender you want, but you aren't allowed to declare your own political ideology.

Thus, as the media has legitimized "punching a Nazi" and practically everyone right-of-center has become identified as a "Nazi," it's not surprising antifa think they can just attack everyone, including Proud Boys or even people they think are Proud Boys. When your whole purpose for existence is simply attacking people you don't like, you constantly need to invent new enemies. The attack on the Marines is not surprising. What's surprising is that, for once, the attackers may face legal consequences for it.