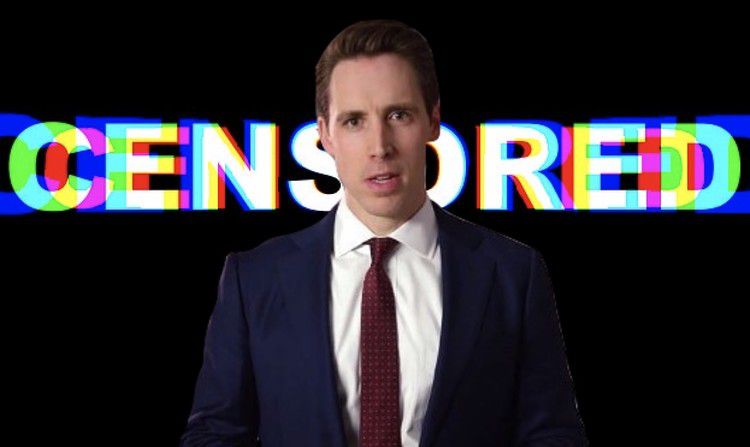 A Republican lawmaker is finally taking on Big Tech censorship. Missouri Sen. Josh Hawley announced Wednesday a bill that would aim at the Achilles heel of Big Tech: Section 230 of the Communications Decency Act.

Section 230 gives tech platforms immunity from publisher liabilities. The reason being is that they provide a “forum for a true diversity of political discourse.” VDARE.com readers are probably aware of this protection from our many articles demanding Republicans re-examine this protection. It looks like one of them took notice.

Hawley’s bill would require all large platforms to submit to a government audit to assess if they operate as neutral political forums. If they refuse to comply or fail the audit, the platform would be stripped of its Section 230 protection. [GOP Sen. Josh Hawley takes aim at Big Tech's legal protection with new bill, by James Rogers, Fox News, June 19, 2019]

The Missouri senator believes large platforms such as Facebook and Twitter are operating more like publishers than neutral forums and hopes the audits can reform their behavior. “There’s a growing list of evidence that shows big tech companies making editorial decisions to censor viewpoints they disagree with,” he said in a Wednesday statement. “This legislation simply states that if the tech giants want to keep their government-granted immunity, they must bring transparency and accountability to their editorial processes and prove that they don’t discriminate.”

The move was just what Republicans needed to do, as the Watcher has outlined. Tech companies cling to this protection because it benefits them immensely. Lawmakers taking a look at it terrifies them. When Democrats threatened Section 230 over a viral video of Nancy Pelosi, Facebook responded by taking down the video.

The new legislation may spur tech giants to chill their zeal to suppress conservative opinions.

Sadly, many conservatives and libertarians already oppose the bill. Koch-funded Americans for Prosperity claims it undermines free speech by allowing government interference in the internet. Reason also complained the bill gives too much power to the government over poor tech megaliths. [Josh Hawley Introduces Bill to Put Washington In Charge of Internet Speech, by Elizabeth Nolan Brown, Reason, June 19, 2019]

But there was one surprising figure who seemed interested in the bill: Ben Shapiro. Shapiro retweeted Hawley’s announcement of the bill and a law professor’s defense of it. Perhaps the YouTube purge convinced the Daily Wire editor that the free market won’t fix the problem after all.

The bill is the best development so far in the fight against tech censorship. There are certainly still questions about the bill and how it will be enforced. Will it still allow tech companies leeway to censor speech that deem “hateful”? Who exactly will conduct the audit and will it be overseen by a non-partisan committee? Those all will probably be figured out in the coming months.

The most important question is whether other senators will support it. Democrats want tech giants to censor more. Too many Republicans bow before corporate power and will hesitate to regulate their abuses. But there’s one person who can get most Republicans on board: President Trump. A presidential endorsement of the bill may shock Big Tech into reform.