Craig Silverman of Buzzfeed has a thing about what he and Buzzfeed think is Fake News:

“What do you do when your parents go from posting Minions [memes] to posting hard-right memes about cement milkshakes?” July 23, 2019.

The problem is that the "cement milkshakes" thing isn't a hard right meme, it's a warning from the Portland Police Department.

It starts with a thing about how John Cusack (born 1966) retweeted what he thought was a Voltaire quote, which turned out to be authored by a 20th century anti-Semite. (That would be the "extreme" content.) Then they get into the fake news that older people might find themselves sending out:

[Mike Caulfield, director of blended and networked learning at Washington State University Vancouver] said it’s common for older people to unwittingly share things that have extremist messages or iconography. “It's very hard to see people posting stuff that may come from a kind of a dark place that they don't realize is dark,” Caulfield said. “What do you do when your parents go from posting Minions [memes] to posting hard-right memes about cement milkshakes?”

That link goes to an article that displays the official warning that the despicable Antifa custom of "milkshaking" dissidents might go from assault to aggravated assault with a weapon: 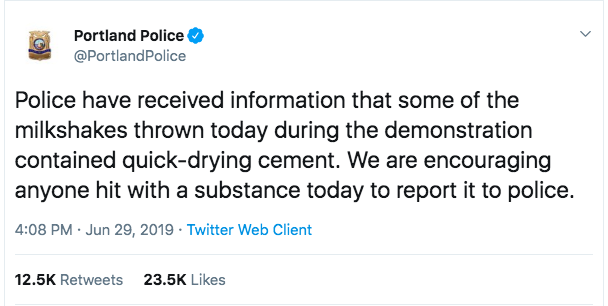 They then claim that police haven't proved it:

PPB's tweet is referencing the homemade vegan milkshakes that Popular Mobilization, one of the left-leaning groups, handed out to hundreds of attendees during the day’s events. Several people ended up throwing their 12-ounce milkshakes at people associated with the alt-right and at PPB officers—but most people consumed the coconut milk-based treats.

PPB did not immediately offer proof to substantiate this claim.

So there was a criminal conspiracy to riot, people did throw milkshakes provided by the conspirators, and Andy Ngo was almost beaten to death. And that's what Buzzfeed wants people not to talk about.