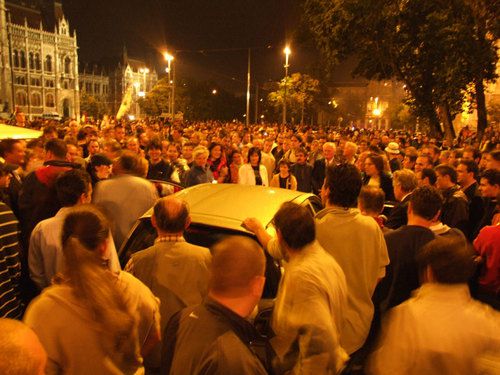 From: A Hungarian Reader [Email him]

I hope the truth will start coming out.

I just wanted to add: the strategy of police supporting (or turning a blind eye to) violent gangs, and then using them as an excuse to beat up ordinary people, has some recent history.

I am Hungarian, and in Hungary in 2006 that is what happened precisely. The socialist-liberal government had massive protests from center right supporters, so what they did, is let a gang of far-right people loose among the center-right protesters, they then had the media take pictures of the those few far-righters (who were indeed violent, setting cars on fire, etc.), and beat up all the center right people (families, women, children) who had nothing to do with the violence. (The Hungarian far right Jobbik is a very suspicious gang: they were probably a creation of the socialist-liberal parties to make Hungary look neo-Nazi, and for things like the above. They espoused some legitimate goals in the beginning, but have strayed a long way from those since then.)

In France Macron is also doing this. Sometimes it is police turning a blind eye to violent protestors with black masks (perhaps antifa), mostly it is the police who aredoing the violence against innocent protestors, and in some cases it was the police who robbed stores.

I think there is hope that this formula will eventually stop working and people will not believe it, especially if articles like this one continue to be written.

James Fulford writes: I was unaware of the Hungary 2006 situation, possibly because Western media doesn't think Hungarian politics are that interesting except when they can call Orban racist. During the US Civil Rights movement, blacks complained bitterly that the police weren't protecting their marches from white mobs.

Therefore it is a Federal felony to conspire to deprive people of their civil rights, and police can be prosecuted. However, we never seem to see this being done when antifa mobs attack white conservatives.

This is the issue in VDARE.com's law suit against Colorado Springs Mayor John Suthers.