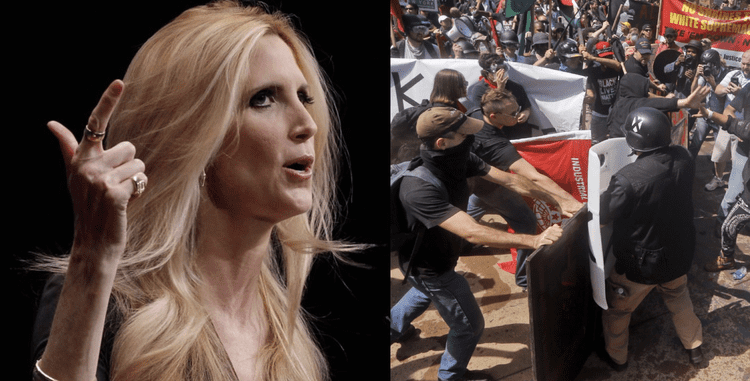 Ann Coulter: Okay, Let's Talk About Charlottesville—And The Media's Lies About It

So Joe Biden launched his presidential campaign talking about Charlottesville.

This tells us that life is so good for the fabulous people on the coasts—the only group the Democratic Party really cares about—that they can afford to devote themselves to crazy fantasies that make them feel morally superior to other people.

The Democratic Party used to be about protecting workers' wages. Now the pitch is: I will suck up more to The New York Times editorial page.

I am in no mood to defend Trump, but the media's wholesale lying about Charlottesville is too much for any sane person to take. Everything the media say about it is the very definition of "fake news."

No human being, dead or alive, has condemned "white supremacists" more than Trump has. I can't begin to quote all the times he has done so, or this column would be the length of a book.

Within the first hour of the melee, the #Resist geniuses were already blaming Trump for the mere existence of white supremacists and neo-Nazis. It kind of looks like Trump was going to be called a Nazi no matter what he did.

Soon thereafter, Rob Reiner tweeted: "Let's be clear. The hatred we're seeing in Virginia lies at the feet of Donald Trump. Stoked during the campaign, his silence condones this."

Alyssa Milano tweeted at 11:59 a.m.: "Hey, you going to comment on this, @realdonaldtrump? #AltReich"

Trump was a Nazi because some of the people who hate him managed to get on Twitter a few hours before he did that day. (He was golfing.)

Around 1 p.m., Trump began tweeting about Charlottesville, saying, among other things: 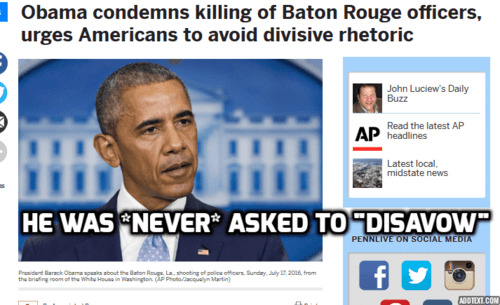 The actresses said: NOT GOOD ENOUGH! (Sarah Silverman: "This is on-purpose vague bc ur a wimp that stands 4 nothing ...")

Trump's statements were a LOT more condemnatory than any Obama statements on either the Dallas cop-killer or the Muslim who murdered 13 people at Fort Hood.

Back to Trump's shockingly inadequate response to violence in Charlottesville. Later that day, the president reiterated the color-or-creed point and condemned the "hatred, bigotry and violence on many sides."

Then we were off to the races! He said MANY SIDES. Q.E.D. He's a Nazi.

That's when twits like Marco Rubio and Mitt Romney said: Wrong! On one side were FASCISTS and on the other, anti-fascists, who are pure of heart and cute as little puppies ... as they beat the crap out of college conservatives.

New York Times reporter Sheryl Gay Stolberg, reporting from the ground in Charlottesville, had tweeted: "The hard left seemed as hate-filled as alt-right. I saw club-wielding 'antifa' beating white nationalists being led out of the park." 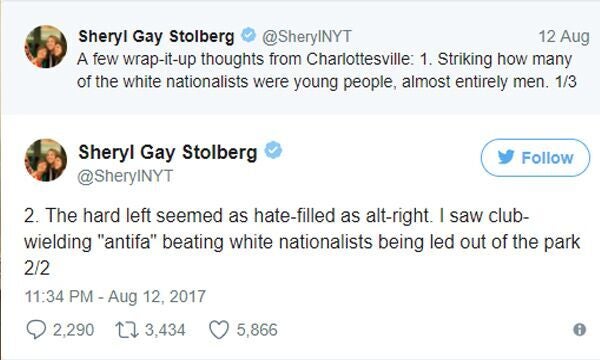 Trump was a monster for seeing the same antifa violence that a New York Times reporter saw. (The left went mental on Stolberg, so she deleted that tweet. Reality must not be allowed to interfere with the media's lies!)

Two days later, Trump held a press conference on Charlottesville expressly to denounce neo-Nazis and white supremacists for the billion-and-oneth time: "Racism is evil. And those who cause violence in its name are criminals and thugs, including the KKK, neo-Nazis, white supremacists, and other hate groups that are repugnant to everything we hold dear as Americans."

The following day, at a press conference on infrastructure, the press had about two questions on that topic and dozens of accusatory statements on Charlottesville.

(It's been nearly a decade since a Muslim shot up Fort Hood in Texas and we're still waiting for Obama to "blast" Nidal Malik Hasan.)

(Was Obama ever asked why cop-killers liked him?)

The rest of the reporters' questions were more in the nature of "statements":

Q: Nazis were there. Q: David Duke was there. Q: The neo-Nazis started this.

In a press conference that was—again—on infrastructure, Trump spent paragraph after paragraph—more than 200 words—denouncing white supremacists and neo-Nazis. He condemned "hatred" and "bigotry," called the driver of the car that killed Heather Heyer a "murderer," and repeatedly said "the neo-Nazis and the white nationalists" were "very bad people."

But he also said: "Not all of those people were white supremacists by any stretch. Those people were also there because they wanted to protest the taking down of a statue of Robert E. Lee."

Trump clearly distinguished between the people "protesting very quietly the taking down of the statue of Robert E. Lee" and "the bad ones"—the "neo-Nazis, white nationalists, whatever you want to call them."

Actual question from a reporter: "Sir, I just didn't understand what you were saying. You were saying the press has treated white nationalists unfairly?"

That idiocy has now been enshrined as a canonical belief of the Democratic Party, worthy of launching a presidential campaign. Life must be great on the coasts.