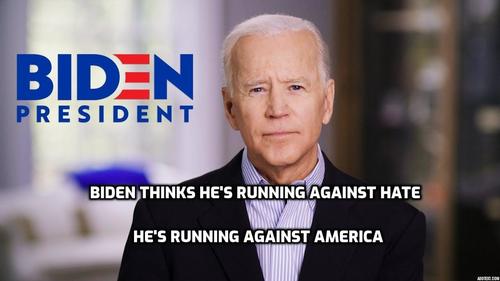 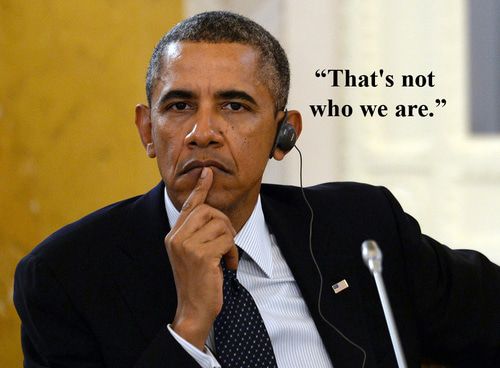 The other words are largely pasted together from CultMarx boilerplate phrases. The Obama-ish phrase "who we are," for example, which is now so threadbare even Leftists wince at it, turned up three times, along with "America's an idea," and the obligatory reference to "Europe in the 1930s."

Why is it these Lefty orators never throw in a mention of St Petersburg in 1917? Hard to figure.

And of course Biden’s video didn't lean on the Charlottesville events so much as on the Narrative of them constructed and broadcast by CultMarx media outlets, then re-broadcast and re-re-broadcast in a determined and successful effort to smother any account of what really took place.

That tag is a bit optimistic: The CultMarx narrative of Charlottesville is triumphant in major media and probably among the public at large. That narrative has only collapsed among the tiny sliver of the population who have read all 207 pages of the Heaphy Report [PDF |alternate ]or the objective summaries of the report offered at websites like VDARE.com. Certainly Joe Biden had no qualms about retailing the dominant narrative in all its brazen mendacity.

And that's when we heard the words of the President of the United States that stunned the world and shocked the conscience of this nation. He said there were, quote, "some very fine people on both sides."

Very fine people on both sides? With those words, the President of the United States assigned a moral equivalence between those spreading hate and those with the courage to stand against it.

I don't myself buy the "moral equivalence" argument. One side in the Charlottesville fracas had the sole intention to hold a legally-permitted rally in defense of a historic statue. The other side had the intention to disrupt that rally violently. Local politicians and law-enforcement encouraged and assisted the latter faction. See Charlottesville Narrative Collapse: Heaphy Confirms Sam Dickson—Police Told "Let Them Fight It Out".

Moral equivalence? I don't see it.

What did the President actually have in mind when he spoke the words Joe Biden's quoting? Here's what Trump said:

The fact remains, however, that the first group, Nazis and all, had lawful permits to be where they were and do what they were doing, and the second group didn't. But the authorities let that second group attack the first anyway.

So Joe Biden, this republic's leading argument for congressional term limits—he's been warming seats in Washington, D.C. since the Nixon administration and has already run for President twice, the first time 32 years ago—Joe Biden has launched his third campaign with a bare-faced lie.

Not much to be surprised about there: He launched that first campaign with an act of bare-faced plagiarism.

It really does seem to be crazy time in the Democratic Party.

Not that Democratic policies are crazy: For sure some of them are—Open Borders, free college, banning cars and planes—but I doubt anyone much takes those seriously. When you consider what we might reasonably anticipate actually getting from an actual Democratic administration, it only differs in shades of gray from what we have currently under President Trump.

This is the age of the Uniparty. Heck, the borders are more open now than they were under Obama.

No, the real craziness is in the poll numbers for Democratic Presidential candidates. You'd think that by now we would have passed into the age of woke millennial voters driving those numbers, calling for youth, vigor, and novelty.

Yet when I brought up the Morning Consult website on Friday—that's a basic, pretty reliable polling outfit sampling fourteen thousand likely Democratic primary voters nationwide—who should I see grinning out at me from the top of the poll but Joe Biden, favored by thirty percent of pollees, and Bernie Sanders, with 24 percent.

Yes, Joe Biden's out in the lead there, favored by thirty percent of likely Democratic voters nationwide, thirty-four percent in the early-primary states of Iowa, New Hampshire, South Carolina, or Nevada, when the actual voting starts to make headlines a few months from now.

All those millennial-friendly wunderkinder I've been reading about are way behind the two big kahunas. None of them even breaks ten percent, although Peter Buttigieg is close at nine percent. Of the seventeen candidates listed—yes, we're up to seventeen, with a year and a half to polling day—only six break five percent.

A lot of the explanation is just name recognition. Thirty-six percent of respondents hadn't even heard of Mayor Buttigieg. If you are one of those who never heard of him and would like to get up to speed, I offered some extended commentary here last week.

Those of us who watch politics for a living tend to forget how little space it occupies in the minds of normal people, thank goodness. Most Americans find their families, their friends, their jobs, their hobbies, and the fortunes of their local sports teams more interesting than politics.

Even in these politically-fevered times, voter turnout in presidential elections struggles to break sixty percent. In last Fall's midterms, turnout broke fifty percent for the first time since … Can you guess? When was the previous year more than half of eligible voters turned out for a midterm?

Nevertheless, it's still astonishing that the dynamic, progressive, forward-looking Democratic Party, which is so strongly favored by smartphone-addicted millennials with their untucked shirts, body piercings, skintight jeans, and degrees in Gender Studies, should have as its way most-strongly-favored presidential candidates two white guys whose ages on being elected, if either were to be elected, would be 78 or 79.

Should we mind these guys' ages? Eh, it's a trade-off. The great rule of life in these matters is the one that Frenchman gave us all those centuries ago: Si jeunesse savait, si vieillesse pouvait—"If youth only knew; if age only could." When you're young and full of vigor you can accomplish anything, but you don't know squat. When you're old you're loaded up with wisdom, but it's hard to get much done.

There's a lot of individual variation, of course. I find it hard to believe, though, that most Americans, let alone most millennials, really want an octogenarian President.

If I'm right about that, the DNC needs to put more effort into getting name recognition for the thirty- and forty-something candidates further down the current polls.

According to Claud Cockburn, in the 1930s the English Language edition of The Communist International  (the official voice of the Kremlin) translated a party directive addressed to  the British Communist Party as "the lower organs of the party in Britain must make still greater efforts to penetrate the backward parts of the proletariat".

Seems like the Democrats still have a lot of penetrating to do.

So I'm going to follow that up with a Buttigieg joke, right? Wrong! Why would I do that?