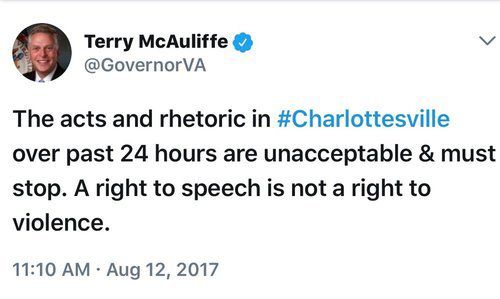 From: A Charlottesville Non-Believer [Email him]

I just sent an email to the White House encouraging the President to open an investigation into Charlottesville immediately. The rationale that I provided was to expose Terry McAuliffe who might otherwise emerge as a formidable candidate on a second or third ballot at the convention. The Democrat's strategy of having so many candidates appears to be one that ensures that the super delegates will decide the nominee.

Terry McAuliffe is every bit as nasty as Joe Biden in his heyday and far more ruthless. McAuliffe is staying in the shadows for now; intentionally in my view so as not to trigger an investigation that could derail his prospects.

James Fulford writes: Sam Dickson (who was present at Charlottesville) wrote in a statement we published November 30, 2017 [Sam Dickson’s Statement To Charlottesville Inquiry: “The Police Were Acting Under Orders. WHO GAVE THOSE ORDERS?”] that, hearing a proclamation that the rally was being declared unlawful, he felt that it had been planned: 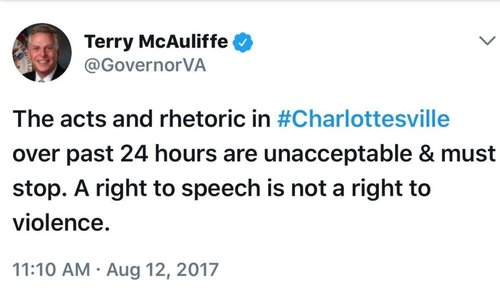 I assume the proclamation had been written by Governor McAuliffe or the State Attorney General in advance because there had been no criminal activity by the participants and the text was obviously in writing.

Veteran Democratic politician McAuliffe was governor of the State of Virginia at the time, and the Tweet screenshotted at right is still up, although since it's the official @GovernorVA, the Tweet now appears to be signed by Ralph "Blackface" Northam.

It sounds a lot like the Democratic Governor of Virginia was declaring a state of emergency to stop the offensive speech at the rally. At the time, we got a letter from a man who wrote:

Virginia Governor Terry McAuliffe (and possibly state police) must be held in contempt of Federal Court. He declared a state of emergency, and then he and/or state police declared unlawful assembly, to end the Lee Park event at the same time he was tweeting his content based opposition to the presence and "rhetoric" of the event. Check out his tweet stream. He is effectively bragging about it - clear evidence of contempt of the federal court injunction order.