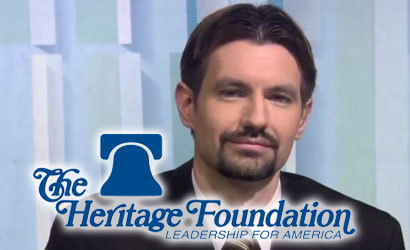 Heritage Foundation Fired Richwine Over Truth About Immigrants—Now Wants To Cash In On Brat vs. Cantor

I got on the Heritage Foundation’s email list because a few years ago I was looking for a new job and figured a politically-conservative organization would be a good fit. Heritage happens to offer a helpful job bank for this purpose, delivered about once a week by email. (It’s so helpful, in fact, that I would recommend signing up to any VDARE.COM readers looking for work.)

Heritage uses email addresses collected in this way to send out newsletters, event notifications, invitations to take polls and surveys, and other things like that. I’m sure there is an easy way to opt-out of all this, but it is unobtrusive enough that I never bothered to. Besides, a few of the articles have been worth reading.

From my email on the 13th, the poll to which I was directed was vague and, from an empirical data-gathering standpoint, likely scientifically useless. It seemed obvious that its purpose was instead to provide a way for a future article to say something like “In a recent Heritage Foundation survey, it was found that X% of self-identified conservatives think Y.”

Here is the poll’s full text:

“Do conservative ideas resonate with voters?”

Recent primary election results seem to suggest that conservative ideas are resonating with voters and capturing the attention of the national media.

We want to know what you think...

Do you identify as a "Conservative"?

Do you think conservatism [sic] values and policies are good for our country?

Are you optimistic about the future?

(The answers I’d have liked to give, respectively: “No, my views are actually fairly mainstream”, “Yes, if we're talking about the same things”, “Only when I’m alone with my family”.)

That introductory sentence piqued my interest. What did the Heritage pollsters mean by “conservative ideas” that are “resonating with voters”? Are these the same ideas that are “capturing the attention of the national media”?

For some reason, the Heritage pollsters never specified which recent primary election they were talking about, though it was clear they were referring to David Brat’s defeat of Eric Cantor. That election seems to have been decided largely over the issue of immigration—more precisely, the notion that supporting Amnesty for millions of immigrants who are here illegally is foolish or worse.

Nevertheless, after some hesitation, the national Main Stream Media have largely ignored this defining aspect of the Brat’s victory, painting the results instead as evidence of everything from Tea Party rebelliousness to anti-Semitism—anything, in fact, other than immigration.

So there was, in fact, a real disconnect between the conservative ideas that resonated with voters and the ideas that captured the attention of the national MSM. Puzzling. Why was the introduction to the poll worded so cryptically?

I went back and read Rob Bluey’s email more closely to see if I could glean something from context. Here it is in full:

I'm writing because I want your opinion.

Conservative ideas are rooted in the timeless ideals of the American founding. The movement is not defined by a set of policies but rather by a commitment to conserve America's founding principles.

Recent events in Virginia suggest that the conservative movement is gaining steam, and The Heritage Foundation is conducting a two-question poll to gather feedback on what you feel about conservatism today.

Please take a moment to make your voice heard.Take the poll now.

Thanks for all you do for Heritage [i.e. receive occasional emails?—BA] and the conservative movement.

Editor in Chief, The Daily Signal

Here, not only was the Brat vs. Cantor election was never named specifically, but Bluey didn’t even mention an election at all—just some nebulous “events in Virginia”. Even more cryptic.

Bluey starts with a grand statement about conserving the timeless ideals of America’s founding principles. Opposing Amnesty to 11-plus million illegal immigrants, as Brat does, certainly seems to be in line with those principles. But according to its own immigration “Issues” page, the Heritage Foundation opposes Amnesty as well. The Daily Signal’s own Genevieve Wood even wrote an article about “the issue that likely fueled Cantor’s defeat.”

So why hedge the poll language with such vagueness?

The U.S. should reform its immigration system through a careful, step-by-step process that welcomes lawful immigrants, encourages their full participation in American life, and expands opportunity. The process also must prevent unlawful immigration, encourage respect for law, secure America’s borders, and preserve America’s sovereignty.[4] The Heritage Foundation has described this step-by-step process for a problem-solving approach to immigration issues, such as reform of the lawful immigration system, visa reforms, lawful temporary worker arrangements, and strong border and interior enforcement.[5]

A closer reading of the Heritage Foundation’s immigration page reveals that its most thorough takedown of Amnesty is none other than the same paper that led to the Jason Richwine witch-hunt and his “resignation”: The Fiscal Cost of Unlawful Immigrants and Amnesty to the U.S. Taxpayer, By Robert Rector and Jason Richwine, Ph.D., May 6, 2013

(Reports about immigration appearing on that page since then have been rather neutral or even supportive, though a fair number are not.)

In practical terms, Richwine was fired from Heritage amid controversy over his Harvard dissertation, IQ And Immigration Policy, in which he dared utter the hatefact that immigrants from Latin America have lower IQs, on average, than American whites, and that it might therefore not be a good idea to let millions of them in.

Richwine’s findings did indeed clash with the Heritage Foundation’s vision. A statement about the paper, penned by Senior Fellow Mike Gonzalez, says the Foundation’s vision includes the belief that “every person is created equal”. [Heritage Statement on the Cost of Amnesty Study,May 08, 2013]

In the world as Heritage sees it, apparently, we all have the same IQs.

Further in that statement Gonzalez writes:

We welcome a rigorous, fact-based debate on the data, methodology, and conclusions of the Heritage study on the cost of Amnesty. Instead, some have pointed to a Harvard dissertation written by Dr. Jason Richwine [the one with all the hatefacts in it].

Dr. Richwine did not shape the methodology or the policy recommendations in the Heritage paper; he provided quantitative support to lead author Robert Rector. The dissertation was written while Dr. Richwine was a student at Harvard, supervised and approved by a committee of respected scholars.

Immigration reform is a critical discussion for the future of our nation, and it should focus on what is in the best interest of all Americans and those who aspire to be Americans.

Anyway, this explains Bluey’s and his pollwriters’ cryptic language: the Heritage Foundation wants to bask in the glory of Eric Cantor’s defeat and ride this train of conservatism that is “gaining steam.” But it doesn’t want to say specifically that this is what it is doing or why because, like Cantor, it actually has a rather shameful record on the immigration issue.

After all, if the Heritage Foundation's history of double-talk and equalitarianism became too widely noticed and easy to point to, the public might react to them the same way they reacted to Cantor.

Boss Aktuba [Email him] once hid his identity because he worked in the Hollywood film industry. Now he's moved back to the Midwest and works in software development, and continues to use the obviously fake name “Boss Aktuba” because he just wants to keep his family safe in spite of his mainstream–but, to elites, radical–views. He writes in whatever spare time he can find.