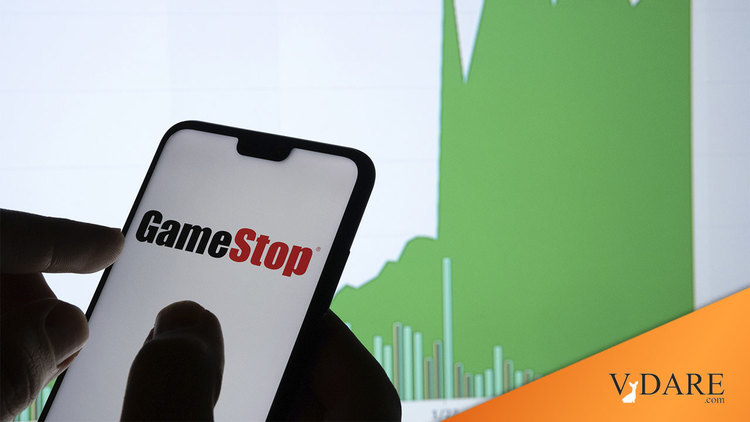 Earlier: Gamestop: Everything That Challenges the Establishment's Rule Must be "White Supremacy"

For the first time since Donald Trump’s 2016 campaign, a viral, uncontrolled, and populist campaign is raging, this time against Wall Street. By identifying a financial vulnerability, retail traders managed to beat major hedge funds at their own game via a classic short squeeze. In response, online trading platforms intervened to restrict the ability of traders to buy key stocks, pushing prices down in a blatant attempt to bail the hedge funds out. Significantly, Regime Media outlets have begun smearing the traders as racist and anti-Semitic. In America today, everything comes down to race.

The words “racist,” “white nationalist,” or “extremist” don’t have real meanings anymore—they are just ways to discredit resistance to the Ruling Class. Immigration boosterism is the key to understanding why today’s “Progressives” have become the militant wing of the System. What is being created is an entirely “closed” economic system, where if you don’t play by the rules of a rigged game, you can’t even survive. The middle class isn’t “dying,” it’s being murdered. And so is the Historic American Nation.

Short version: ordinary Americans, semi-organized on various forums and discussion groups, began buying GameStop (GME) stock last week. The brick-and-mortar game store has been struggling since the pandemic but was recently recovering. Nonetheless, some hedge funds, notably Melvin Capital, “shorted” the stock, meaning that they essentially bet large amounts of money that the price would go down. Of course, if the price went up, hedge firms and others who shorted GME would lose a ton of money. Unfortunately for Melvin Capital, this is precisely what happened [Melvin Capital, hedge fund that bet against GameStop, lost more than 50% in January, by Pippa Stevens and Leslie Picker, CNBC, January 31, 2021].

It didn’t stop with GME. Other shares that were supposedly being shorted, including AMC movie theaters [AMC] and Bed Bath & Beyond [BBBY] were also favorites for retail traders.

This is taking place because of the rise of commission-free trading through online platforms like RobinHood. With many Americans essentially trapped inside because of the pandemic or because small businesses have been shuttered, small-scale investing has become incredibly popular. Some have made it big, like some new “Tesla millionaires” who invested early in the pandemic in Elon Musk’s electric vehicle company [Elon Musk Haas Made Millionaires Out of His Most Loyal Fans, by Dana Hull, Bloomberg Wealth, December 18, 2020]. It’s thus created a strange situation; people whom “the System” has utterly screwed through COVID-19 lockdowns, elite-sponsored BLM riots in major cities, and ruinous regulations have somehow become owners, in a small sense, of “capital.”

However, this doesn’t mean this new class of traders is wed to the System. Americans of all races, creeds, and political denominations know that both political parties failed to deliver a second stimulus payment before the election and have done little since. Progressives are furious that Joe Biden is already talking down the $2,000 that were supposed to be going “out the door” if he got his Democratic Senate majority [$2,000 stimulus checks are possible after Democrats win Senate majority, by Lorie Konish, CNBC, January 6, 2021]. Republicans, Trump-supporters, and nationalists are angry at “Woke Capital” and what many see as rotten institutions in general.

Everyone remembers the bank bailouts during President George W. Bush’s second term. Thus, there’s a sense of vengeful (and justified) nihilism on both Left and Right, as people with nothing (except a few hundred dollars) are buying GameStop just to hurt hedge funds [‘Revenge Tactic: GameStop’s Massive Stock Surge Isn’t Only About Making Money, by Peter Allen Clark, Time, January 28, 2021].

Models that assume people will act rationally can’t explain this: 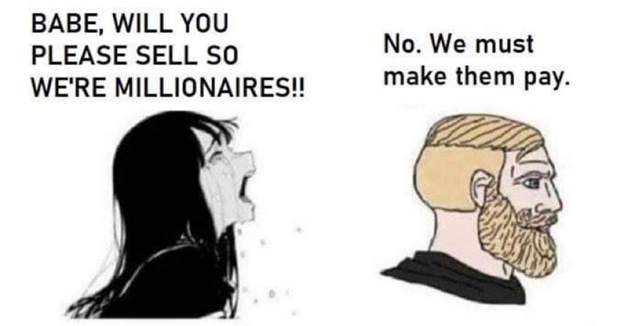 The Regime has moved to re-assert control in two ways.

Not surprisingly, both ordinary people and politicians were outraged [Robinhood Halts GameStop Trading, Angering Lawmakers And Investors, by Kelly Anne Smith, Forbes, January 28, 2021]. It didn’t help that figures in Citadel Securities, one of RobinHood’s biggest financial backers, were also tied to the hedge funds getting killed in the trading [The Citadel Link: What Ken Griffin Has to Do With GameStop, by Katherine Burton and Sridhar Natarajan, Bloomberg, January 31, 2021].

Even better, our new Secretary of the Treasury, Janet Yellen, has received outrageous sums to speak at Citadel [Well, Janet Yellen Got $810,000 to Give Speeches at One of the Firms in the GameStop Mess, by Ben Mathis-Lilley, Slate, January 29, 2020].

Regime Media moved to link the movement to “GamerGate,” when gamers pushed back against Leftist journalists invading the video game subculture and which journalists blame for fueling the Alt-Right and President Donald Trump.

As Tucker Carlson noted, questions about Yellen’s involvement at Citadel were brushed aside by the Biden Administration with the argument that she’s female and thus above scrutiny [Tucker Carlson: Robinhood, GameStop, and Wall Street’s rigged game, Fox News, January 29, 2021].

Robinhood’s CEO, Bulgarian-American billionaire  Vlad Tenev, claimed that allegations the firm was trying to manipulate prices was a “conspiracy theory”—a damning charge when belief in a “conspiracy theory” like QAnon is enough to get you permanently deplatformed [Robinhood CEO: We ‘made the right decision’ in response to potential investigation, Yahoo Finance, January 29, 2021].

Finally, hopes of a bipartisan cooperation were dashed when Rep. Alexandria Ocasio-Cortez played the victim and accused Senator Ted Cruz of trying to “murder” her after Cruz had initially shown her support [AOC rejects Cruz support over Wall Street chaos: ‘You almost had me murdered,’ by Veronica Stracqualursi, CNN, January 29, 2021].

To be on the Left today is simply to be anti-white. Progressives have no other core belief—and nothing they won’t sacrifice if it means they get to hurt whites.

Still, no matter how Leftists posture, the fact remains that retail traders trying to get by did more to confront Wall Street in a day than Progressives have done in a half-century. So why have Progressives today become the lapdogs of Wall Street?

One word—immigration. Immigration-driven Identity Politics is the key issue that caused Democrats to abandon the working class. It’s ultimately what is preventing any kind of a broad-based bipartisan economic populism.

Non-white ethnic activists, journalists, Leftist academics and others are vocal about the need for what I’ve termed “Punishment Migration” to destroy the West for its perceived historical sins [Punishment Migration, The Social Contract, Fall 2018]. If fighting “racism” (i.e., hurting whites) is more important than helping workers in your moral hierarchy, you aren’t going to be much good in any battle trying to hold financial elites to account.

Thus, there will be no broad-based populist movement that will unite Left and Right. Instead, journalists and other gatekeepers will work to beat down retail traders by linking them to “Trumpism” or other borderline criminal beliefs [How Trumpism explains the GameStop stock surge, by Chris Cillizza, CNN, January 28, 2021].

Thus Ilhan Omar, supposedly to “protect” retail investors, wants to impose a tax on every trade [Omar proposes tax on trades in response to GameStop stock, by Lexi Lonas, The Hill, January 28, 2021]. This would be on top of the taxes the government already imposes on stock gains [Made a killing in GameStop? Now comes the tax bomb, by Greg Iacurci, CNBC, January 28, 2021].

I also expect discussion groups about stocks to be banned. For example, Discord banned a Wall Street discussion forum for “Hate Speech”—an offense unknown to American law—while denying, apparently with a straight face, that the timing had anything to do with the GameStock phenomenon [Discord Bans Reddit’s WallStreetBets for Hate Speech as Scrutiny Intensifies, by Karissa Bella, Entrepreneur, January 28, 2021]. I’d say I’m suspicious, but I don’t want to be called a “conspiracy theorist.”

Every political question is ultimately about who, not what. It doesn’t matter that many of those involved in financial populism are not Republicans, probably hate Donald Trump, and may not even vote. They are showing that there are ways to survive without being monitored by journalists or “Woke” commissars. For that reason alone, we’re seeing Regime Media move into action against them.

Little guys taking on the Big Money are no longer heroes, but racist villains in Journofa eyes. Shilling for endless cheap labor through mass immigration was the beginning of this fatal process for the American Left.

If Progressives won’t help workers, that leaves nationalists. Today, if you can’t see that words like “racist” are slurs used to discourage opposition to the Ruling Class, I’m not sure you can be helped. Egalitarianism isn’t a creed used to seriously advance equality but a weapon elites use to protect their power [Egalitarianism and the Elites, by Murray Rothbard, The Review of Austrian Economics, Summer 1995].

If there will ever be change, it will come from those who simply don’t care about being called names. Luckily, the number of people like that is increasing.

With President Donald J. Trump gone and this movement still thriving, it shows that we are the beginning of something, not the end.