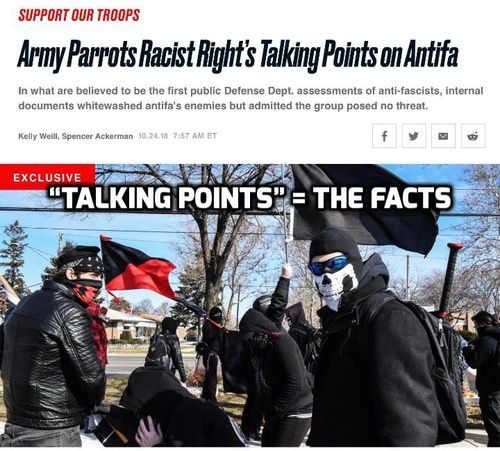 Antifa aren't a problem on their own. They have little self-control, are often mentally ill, and generally antagonize normal Americans in the way they attack people and scream obscenities. To discredit them, all you must do is put them on camera. Yet they are a problem because journalists constantly cover for them and disguise the nature of their activities. And because the media is apparently sovereign in this country, the Justice Department takes this as a reason to let them off the hook for their crimes and punish those who defend themselves. There is no real line between antifa and journalists, as they often believe the same things, signal boost each other's propaganda, and generally work in tandem.

The documents showed the Army struggling to characterize antifa, or antifascism, a decentralized movement that confronts extremist right-wing forces. Despite conceding that antifa is not connected to any known threat facing service members, the documents showed that the Army is encouraging service members to “maintain situational awareness” of the movement, whose profile has soared after the election of Donald Trump—and which mainstream Republican politicians demagogically describe as a Democrat-aligned mob...

"With the newly released documents, we again find a U.S. agency targeting anti-fascists as security threats while downplaying the menace posed by white nationalists,” said Ryan Shapiro, Property of the People’s executive director.

One of the documents, dated June 30, 2017, is titled “Situational Awareness: Criminal Activity Sometimes Associated With ANTIFA and ANTI-ANTIFA Gatherings.” Warning of potential violence at “scheduled nationwide protest[s]” for the 4th of July holiday, it portrays Antifa as a sprawling “network of left-wing anarchist group [sic] whose goal is to ‘smash fascism in all its forms,’ specifically sexism, racism, homophobia, government corruption and Islamophobia.” (Some anti-fascists are anarchists, while others are not.)

Antifa’s antagonists, however, are portrayed in a more favorable light: “According to open source [publicly available information, often news reports], ANTI-ANTIFA members are individuals and groups who are engaged in a political battle against ANTIFA, but who are not affiliated with racist nationalists.”

Of course, it's actually true that there are groups that are "anti-antifa" who are not racist. The militia groups sometimes called "Three Percenters" are not racist, with the Oath Keepers coming to blows with white nationalists at one protest [Boomer antifa’: White supremacists rip into paramilitary Oath Keepers for not being racist enough, by Derek Hawkins, Washington Post, June 16, 2017]. (They still were implicitly called racist by journalists for their trouble.)

The Proud Boys are another group that specifically denounces racism as a founding principle. The MSM simply ignores this. This is how we get Daily Beast masterpieces like Why Young Men of Color Are Joining White Supremacist Groups. [by Arun Gupta, Daily Beast, September 4, 2018]

Yet this isn't the real problem with the article. It's not just an insult to the military (which is implied to be working with fascists). It's somewhat of an insult to leftists. Antifa themselves are quite open about what they believe, including opposition to the military, the police, and to "the very notion of citizenship," as Mark Bray put it in Antifa: The Anti-Fascist Handbook.

Therefore, it's not surprising antifa have already attacked military recruiting stations, including one incident only two months ago.

An Antifa protest in Berkeley turned violent Sunday when one masked group member sucker-punched a detractor and other agitators smashed the windows at a Marine Corps recruiting post, cellphone video showed...

In a series of photos posted to Twitter by filmmaker Ford Fischer, members of Antifa can be seen smashing the windows of the U.S. Marines Corps recruiting office on Shattuck Avenue.

"No police were around as the black bloc traveled down the street, and a handful used hammers to smash the windows of Shattuck Ave US Marine Corps Recruiting office," Fischer wrote in a tweet.

He added: "After I filmed the antifa break the Marine Corps office window and throw a torch into a dumpster, one of them called a few over to confront me. They basically told me to leave, implying attack if I didn't. I left. 'Get the f--- back. Cops aren't here. They won't help you."

Now, most likely Weill and Ackerman know this. Anyone who has even passing familiarity with antifa and what they actually believe knows this. But to further their Narrative, they play dumb. So they let an anti-fascist activist give his talking points "on condition of anonymity."

“‘Antifa’ means anti-fascist, i.e. people who are against fascism,” a New York City anti-fascist activist, who spoke on the condition of anonymity, told The Daily Beast. “The provenance of the term ‘anti-antifa’ originates in the messaging of neo-Nazi movements and is absolutely a term used by ‘white power’ groups and adherents around the world. Just breaking down the term, anti-anti-fascist just means fascist. The question that arises is why is the U.S. Federal government casually using a term originating in neo-Nazi circles?”

Leave aside the line about "people who are against fascism," which most VDARE.com readers are probably rolling their eyes at. Leave aside the question about whether reporters would allow a right-winger to give his talking points "on the condition of anonymity." There's obvious followups for this "activist." Does he consider the military a "fascist" institution? Is the police a "fascist" institution? Does he want to abolish them along with the "notion of citizenship?" One doesn't need to oppose antifa to discover this basic information. But one would have to go through the motions of pretending to be a reporter.

Considering how close Weill is with antifa, she knows this already. But she evidently thinks Daily Beast readers are idiots. She might be right.

Another source for the piece is Daryl Johnson, identified only as a former Department of Homeland Security analyst. Left out is that he is also a contributor to the Southern Poverty Law Center. He also recently supported a plan by the state of Virginia that would essentially label right-wing demonstrators "domestic terrorists," hailing it as "particularly progressive" [Proposed 'Domestic Terrorism' Law Targets White Advocates, by Gregory Hood, American Renaissance, February 25, 2018]

Again, unlike antifa, I think everyone in this country is entitled to their opinion and shouldn't be physically attacked. But journalists should dispense with the pretense that they are reporting the facts. They should be open about their agenda. Journalism isn't a profession, it's a tactic. And all too often, it's a tactic used to further the cause of violent left-wing extremism.